THE END OF GUERRILLA DEMOCRACY NEWS.

That’s it ladies and gentlemen – following the breaking news that Chris Spivey, the most honest and truthful journalist I have ever had the pleasure to read, has been arrested on an harassment charge against the criminal actors of the fake Lee Rigby family; I knew in my heart of hearts, that time was up.

That the police can raid and attack a respected member of the community at 2am in the morning, to search and terrorize himself, his young daughter and grandson is beyond me.

It reminds me of American raids into Iraqi homes at the height of the war.

It simply reinforces our belief that evil murderers, peadophiles and satanic criminals rule the planet and control everything; hence hiding the awful truth that Evil is in charge and controls the world, rapes and kills our kids; sucking our health and wealth for their own evil pleasure, which are beyond the imagination of any law abiding and good-hearted person.

I laughed with my eight year old daughter that daddy may be next, but that it’ll be a good thing because I’ll have the peace and quiet of a prison cell to write my horror novel I've been meaning to write, away from the total distraction of my four year old son who’s a total git!

OR RATHER A 'GREAT INDIVIDUAL TAYLOR' (GIT); AS I MUST APPEASE HIM.

BUT THIS IS SERIOUS. ( and I don’t care if ‘but’ is at the start of the sentence.)

Chris Spivey was kidnapped at 2am and approaching 24 hours later he still isn't home.

This and the fact that so meny (yes I know it’s looks as if its spelt wrong but if you look at it again you’ll see it isn't) people have been calling the police station on his behalf that Chris’s daughter has had to make a public appeal for people to stop calling so she could get through to find out when her dad will be back? 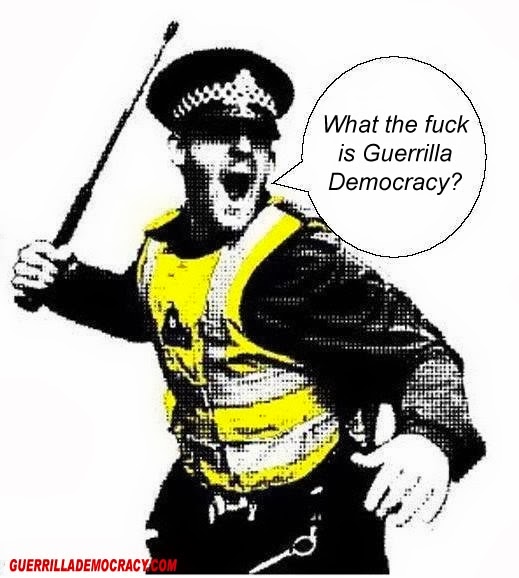 I've been there before and I don’t need to go there again, especially while I've got a family to care for.

Growing up without a father, I know how it feels not having one. Having no-one to say dad to and having no-one to ask for help or advice when you need it most.

A beautiful woman by the name of Sarah Birchall; (who I hope won’t mean me repeating her Facebook status to millions of people) wrote:

“Really love my dad. It's been great getting to know him. I've always wondered where I got my personality from. And my naughtiness, we have the same mischievous glint in our blue eyes

Less than 4 weeks left with him . It will break my heart watching him get on that plane, I might just go back with him.”

Having loved my children for the last 8 years, I’m not about to let them go now.

It’s been a pleasure. – Guerrilla Democracy News is over and may I wish Chris Spivey a speedy return home.


TO THE REST OF LET’S GO TO WAR.
Posted by Guerrilla Democracy News at 14:24

Email ThisBlogThis!Share to TwitterShare to FacebookShare to Pinterest
Labels: guerrilla democracy is over, matt taylor