Email ThisBlogThis!Share to TwitterShare to FacebookShare to Pinterest
Labels: crimebodge

"The President of the United States is a PAEDOPHILE with Dementia." 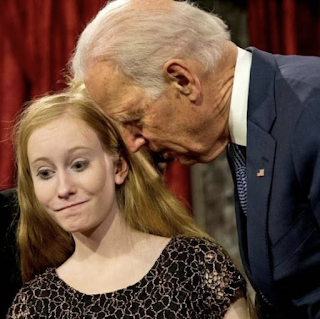 The President of the United States is a PAEDOPHILE with Dementia. His son is a criminal. They both commit treason by selling influence to the highest foreign bidder. Biden has committed multiple felonies including paedophilia and acts of treason and most likely America’s enemies have this and more on them as kompromat. He is compromised and under the control of America's enemies.
The way Joe Biden is with kids is beyond disturbing. He used to have a scripted line he used with every single underage girl he met "I'm going to tell you what I told my daughters, don't date boys until you are 30". He says this while he is pulling these young girls up close to his body. He uses his arm to wrap them around their waist and his hand rests about an inch beneath where the breast line begins. Then he leans over and starts whispering in their ears. He will kiss their temple and stroke their hair. Every. Single. Time. It's some of the most stomach-churning shit we've seen someone do in front of cameras and it mirrors the behaviour of paedophilic sexual predators. Wtf America!?
And guess what... no one wants to talk about it. It disappeared! But we are going to talk about it and about many other hidden scandals. No one can stop us.
Support our non-profit channel if you feel the truth needs to be revealed: https://www.patreon.com/realwomenreal...
Join us. You can be a sheep or a truth seeker, it's up to you.
And no, this is not political, they are all the same.
REAL WOMEN REAL STORIES
Posted by Guerrilla Democracy News at 13:17 No comments:

Unbeknownst to the nation, working behind the scenes, and with a vast array of contacts, resources and intelligence at their disposal, MI6 (British Intelligence) was able to keep one step ahead of Russian President Vladamir Putin’s devilish plot to drop a chemical poison bomb on Brighton beach, across the hottest weekend of the year.

The Straw that broke Putin’s back

Under strain from the Ukraine war, and internal politics within the Kremlin, it is believed that President Putin entered a “red mist of fury,” upon reading DogShitNews, (News the mainstream media hang up on,) in which it was reported a Brighton-based satanist called James Hind, said in a blog, “Likewise, my answer to Putin is drop a nuclear bomb on Moscow resulting in hundreds of thousands of deaths just to get at that one leader.” 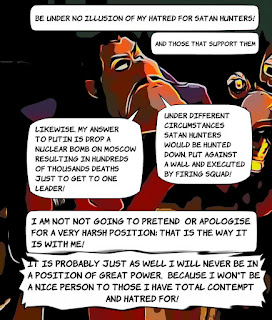 Identifying anyone who believes in the possibility of people torturing, raping, murdering and eating children for Satan, as “Satan Hunters”, SATANIST JAMES HIND said, “Under different circumstances Satan Hunters would be hunted down, put against a wall and executed by firing squad. Be under no illusion of my hatred for Satan Hunters and those that support them.”

“The Russians are worse than beasts, and thus as far as I am concerned, under me there will be no prisoners; all Russian soldiers can expect death.”

I AM THE LAW

It was only through the investigative research of DogShitNews editor Matt Taylor, that both Sussex Police and MI6, were notified on July 10, 2022, that Brighton-based SATANIST JAMES HIND, was blogging about the death and destruction of Moscow in Russia.

Admitting to being only a ‘small part,’ in the defence of Ukraine against Russia, SATANIST JAMES HIND boasted of bringing “unique resources,” to the table in the fight against Russia.

With reports reaching the Kremlin and the desk of President Putin, on 10 July 2022, that the “unique resource,” which was currently being brought to the table, was currently active in the Theatre of War, Putin made a decisive decision to kill all Satanists, currently fighting in the defence of Ukraine!

Said to have launched into a “red mist of fury”, as described by Kremlin officials, the straw that broke Putin’s back was the comment by Brighton-based SATANIST JAMES HIND;

“Likewise, my answer to Putin is drop a nuclear bomb on Moscow resulting in hundreds of thousands of deaths just to get at that one leader.”

Exclusive to DogShitNews, President Putin was reported to have ordered two Russian agents to drop a poisoned chemical bomb on Brighton beach, willing to kill hundreds of thousands of innocent people, just to kill one satanist.

Intercepted in the Russian border town of Vyborg, ex-Black-Ops Super Soldier, Matt Taylor, (and now the prospective Member of Parliament for Brighton Kemptown 2024), was able to feed vital intelligence to Mi6 agents, on the ground, who were then able to use that intelligence to neutralise the threat to the UK, while still on Russian soil.

As the former head of the KGB, President Putin was aware that his plan had been exposed by the investigative journalism of DogShitNews, and behind his advisor’s knowledge, deployed a 12-year-old boy decoy to Brighton, with the intention of killing hundreds of thousands of innocent people, to kill one satanist.

James Hind has turned out to be the unlikely hero, who saved 253,000 lives, by simply leaving Brighton for a week.

“I hope he doesn’t come back, and only wish Putin has a C Plan up his sleeve!” said Matt Taylor, considered by many to be James Hind’s worst enemy!
Posted by Guerrilla Democracy News at 16:12 No comments:

Why Satan Hunter Matt Taylor was kicked out of the army by James Hind.

Matt Taylor of Brighton UK is one of the more colourful of the Satan Hunters, happy to promote and support his fellow Satan Hunters regardless of what they have done. Taylor has a notorious reputation both in his local community and online for being crazy and creepy. He might be one moment standing for parliament with a promise of sacking the Queen in favour of a mad Maori fraud from New Zealand or the next moment being investigated for indecent images of children. He seems to attract the constant attention of the police, from stalking women to his activities with boys in a local woodland.

The creepy video about the “murder” of Matt Taylor’s mum

A YouTuber published a creepy video that Matt Taylor made: where he speaks about his mother being paranoid about him killing her; of her “suicide”; and the investigation by the Orkney police, who initially believed he had killed his mum. Of particular interest is that the video mentions that Taylor had been dishonourably discharged from the army, and had to abandon his mother in Orkney to travel back to England to sign his army discharge papers, shortly before his mother died in an apparent suicide. In one post Taylor had called his mother a “witch” and his father a “cult leader”.

Matt Taylor, his mum, and the loss of his military career

Newspaper articles and other information suggests that Matt Taylor served many years in the army, his chosen career, having passed his training, and probably served as a military policeman.

In 1998 Matt Taylor’s mother suffered a stroke that left her paralysed and in a wheelchair. In 2001 “the dregs of society” in Brighton was taking advantage of his mother and entering her home, leading to a fear her life was in danger. Matt Taylor, feeling that he had to do something about the dire situation his mother faced, made a fateful decision to go AWOL from the army. Both mother and son fled to Europe, travelling from country to country, suffering loss of their possessions and running out of money; they found their way to Orkney.

Matt Taylor was arrested in Orkney, and court-martialed for going AWOL from the army. Unlike in civilian life where an individual can immediately quit their job and nothing happens, this is different in the military, which comes under military law, where people literally sell their body and soul to serve Queen and Country for a fixed period of time. Matt Taylor was imprisoned at the military prison in Colchester known as the “Glasshouse“. After serving his sentence Taylor was demoted and dishonourably discharged from the army.

Whilst Matt Taylor was in military prison, the situation deteriorated for his mother in Orkney, facing eviction and homelessness. After being discharged, Taylor returned to Orkney, but then had to return back to England or face arrest, as he had not signed his military discharge papers. Taylor had an argument with his mother, and then returned back to England, when he was told his mother had died by an apparent sucide. The Orkney police initially suspected that Taylor had killed his mother, such was the sudden speed of his departure shortly before his mother was found dead. Nothing came of the investigation, and thus it is apparently considered to be suicide.

I think Matt Taylor was deeply attached to his mother, and faced a difficult situation of being trapped in his military role whilst his mother suffered an increasingly dangerous situation at home. Taylor made what was in the end a pointless and devastating choice to sacrifice his military career, savings and liberty to help his mum, which still ended in her death. It is probably not surprising that the years 2001/02 was the turning point that produced the sort of demented and twisted creature that we now find in Matt Taylor today.

Regardless of the tragedy, that must have deeply impacted Matt Taylor, there is no justification for the suffering and terror Taylor is inflicting upon his many victims, even upon innocent children. Taylor walks a dark road to his own destruction, and perhaps he needs to examine his own mind, in the manner he currently has been examining the minds of his victims: he attempts to form insight in to his behaviour; how his deeds are impacting the lives and minds of his victims; and then makes choices to become a better human being.

Posted by Guerrilla Democracy News at 01:12 No comments: