Trolling the Trolls - Matt's News from Matt Taylor on Vimeo. 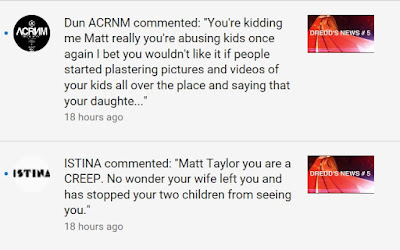 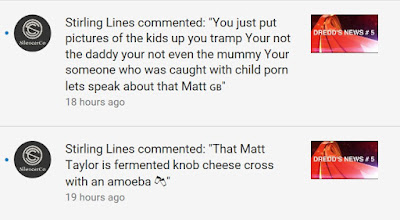 Posted by Guerrilla Democracy News at 10:28 No comments:

It’s been a wonderful weekend with my fantastic and beautiful kids.

Karina, my ex-partner and mother of our kids, was flying with her dad to Barcelona in Spain to spend a long weekend with their brother and son. It was their first opportunity of visiting the newest arrival to the Moraon family, a girl born to his Spanish girlfriend.

Both her brother, Johnny’s and Karina’s birthday were on the 8th and 9th of July respectively. It was my own birthday on the 6th, and while Karina was looking forward to a long awaited holiday in Spain, and a break from the kids; I was looking forward to spending quality time with my children, for a whole five days and four nights.
I rode to Peacehaven on my mountain bike from Moulscoomb on Thursday 5th July; along the seafront and under the white cliffs of chalk, along the eight mile stretch in glorious sunshine and cheer.
Karina would have wanted me there sooner because Lizzy was sick off school and she had a shift at her second job in Newhaven. I had to turn her down due to a previous engagement, which meant she enjoyed the day off to prepare for her holiday. Once I got there, around 3.45 pm, she admitted that it was a stroke of luck to have a good excuse not to go into work.
The taxi came for her about 4.30 pm; and I left my twelve year old daughter sick and sad, to pick up my son from the local after school C.A.T.s club at the Peacehaven football club at 5.30 pm.
Poor Lizzy; she was sick all night, puking up any and everything which hit her stomach. Retching and crying while throwing up bowl loads worth of bile, and other horrid fluids.
I’d cooked a delicious green Thai curry, which while Lizzy didn’t eat all her food, ate enough under the circumstances.
I soothed her and wiped the sick from her mouth, brushed her hair locks away and tried to make her as comfortable as I could. She must have puked up at least a dozen times and threw up during the night while in bed.
Thankfully the next day she had stopped puking. After dropping my son at school, I called my daughter’s school to tell them she wouldn’t be coming in.

I always enjoy quality time with my daughter and on Friday we both enjoyed quality time in each other’s company.
We are both huge tennis fans and enjoyed watching our favourites at Wimbledon. While poorly, she was in good spirits and as it was my birthday, we both enjoyed our time together talking, laughing, preparing lunch and keeping entertained.
With a tomato sauce, cheese and pasta for dinner, and Lewis back home from school safe and sound; (via the local Co-Op shop to buy a World Cup sticker book and four packets of cards, a small fortune for someone in such dire finance as myself), the easy day continued and we were all in good cheer and spirits enjoying quality time together.
I celebrated my 47th Birthday, and with my life lying in ruins all around me, I felt happy, excited and confident of a great future.

The next day was just as good, England v Sweden in the 2018 World Cup Quarter Finals.
Up at the crack of dawn with Lewis jumping on me in bed; within an hour of waking up and having breakfast, I had painted the England flag colours on his face, while he painted the flag on my belly.
Once Lizzy was up, we were again on-route to the Co-Op to stock up on food and drink, another pack of World Cup cards and back home to watch the most important football game England would play that day.
During half time, Lewis went outside to play with the neighbourhood friends, and while he was gone Lizzy was in the mood to paint the England flag on my arm. I had already showered and washed off the England flag Lewis had painted on my stomach. Though because I wasn’t too keen on being painted again, I recommended using felt tip pens, but of-course with no white felt tip pens in our collection, we settled on drawing the Swedish flag on my forearm instead.

When Lewis walked back in to catch the second half, he took one look at the half finished Swedish flag and went ballistic. After admonishing us both for drawing a Swedish flag on my arm, during a match against England, he went to the sink, wet a flannel and stormed back in to promptly wipe it off, much to Lizzy and mine amusement and surprise!
Saturday was a great day. England had won; Lewis Hamilton was zooming around the track at Silverstone and Wimbledon was in full swing. The kids were happy, the nation was happy and the sun was shining.

We all helped making home-made pizza for dinner and all was right with the world.

Sunday and Monday was much the same. No complaints from the kids and no complaints from me. We played, we talked and we lived. Five days of quality time; down the beach, to the shops, down the park, playing football and baseball and riding our bikes.

Lewis and Lizzy made it to school on Monday and I was left to potter around the house, clean up and watch TV.
And of-course I went on the internet to check my emails and social media. What else would you do?
Five days and four nights away in the company of my kids.
Karina made it back home about 10.15 pm on Monday and with an hour bike ride home, I swiftly said my good-byes and got on my way.
It was at 12.40 am on the morning of Tuesday 10th July that I received the following telephone call from Karina.
I apologise for shouting, but that’s how I deal with stressful situations.

This is the bullshit I have to put up with.

“I don’t trust you anymore."

I used Lizzy’s computer to check my emails and social media, or according to the person who I will now refer to as a Moron, “I’ve been on the internet promoted my bullshit and uploading stuff,” the Moron has now threatened to stop me from ever seeing my children again.

I’d been caring for our children for the last five days and four nights, ensuring their safety and security, ensuring they were feed, read and entertained. Making sure they washed, had baths, go to bed, eat their meals and drink their drinks.
I made sure all their needs were meet and we had the perfect weekend any father could have with his children.
But yet the Moron no longer trusts me because over a five day and four night period, I went on the internet promoting my bullshit and uploading stuff.
“I’ve to rethink about the whole rest of our lives, Lizzy and the kids and everything. I’d rather stop it now; you can go and see a lawyer right now.”

This is the bullshit I have to put up with.

Posted by Guerrilla Democracy News at 04:34 No comments: 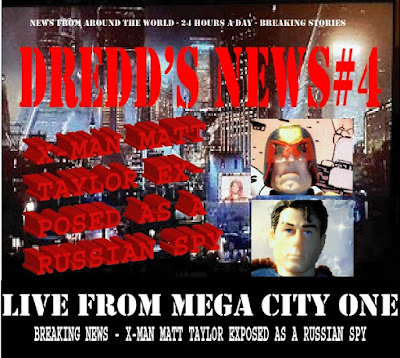 Posted by Guerrilla Democracy News at 02:08 No comments: