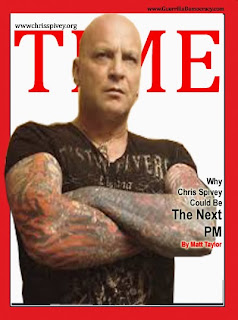 I owe Chris Spivey an apology.

"Ha ha and to think that come members of the wide awake club think that I have lost the plot with this photo malarkey," he wrote in his article dated 22 August 2016, 'Oi Ou, Call A Copper.'
I must admit that I was one of those members of the 'wide awake club' that did think he had 'lost the plot with this photo malarkey' and I said so in my derogatory article published on Guerrilla Democracy News, asking the question, "Has Chris Spivey gone totally mad?
I wrote, "Spivey would have us believe a Harry Potter style Ministry of Magic department is at work in which hundreds of people turn up to an inconspicuous building in London, and get to work following a preordained script written years in advance, sitting down at their desks spending their days writing news articles, manipulating photos and videos before cascading them out to the press to be shown on television and printed in the papers."
Read more: Has Chris Spivey gone totally mad?
http://guerrillademocracy.blogspot.com/2016/04/has-chris-spivey-gone-totally-mad.html
I just couldn't get my head around the enormity of what he was alleging; namely that a Harry Potter style Ministry of Magic department was at work in which hundreds of people are sitting down at their desks spending their days writing news articles, manipulating photos and videos before cascading them out to the press to be shown on television and printed in the papers.
Having followed Chris Spivey since reading his ground breaking article The Drummer Man (exposing the Woolwich false flag event) and Monsters Inc, (exposing the Windsor Royal Family) I've come to respect and value the man's judgment, research and opinion.
So when Spivey says he's convinced of something, I'm inclined to believe him.
"I am now going to prove – beyond all fucking doubt – that the former Essex PCC, Nick Alston is the Lincolnshire Chief Cuntstable, Neil Rhodes…"
You can't get much more 'convinced' than reading statements like that.
While Spivey has singled out Zen Gardener as a character who's done "enormous damage done to the alternative media," I've played my own part in discrediting him, and for that I apologize unreservedly.
When Spivey says, "However, these accusing bods who were once self professed partisans quite clearly continue to read every word I write so I will just say to those who have said they are no longer going to donate to the site because I write crap, that is fine – no problem whatsoever." I hang my head in shame because he could well be talking about me. I'm one of those "self professed partisans," who swore never to read another Spivey article again, only to wait with bated breathe to read every Spivey article as soon as it's published.
Read more: Chris Spivey - I'm not impressed.
http://guerrillademocracy.blogspot.com/2015/09/chris-spivey-im-not-impressed.html
I even remember hassling him to hurry up and publish his Princess Diana article, after which I still haven't finished reading it!
As Spivey complains, "I don’t like this job and the merits certainly do not go anywhere near compensating me for the shite I get."
And then continues, "Oh and one more thing – Those new critics who once donated a fiver in 3 installments: Fuck off and don’t visit the site instead of carrying on reading as normal in parasite mode ya fucking ponses."
Me again! I must confess.... I put my hands up and agree that Spivey is right in saying it..
"I will conclude that polite request by telling you this. I did not know about Zen Gardner. However, the reason for that is in all likelihood due to the fact that I never read his site or any other alternative view sites for that matter, unless in the course of research I am led there via a google search.
Neither am I interested in or reading the findings of the self appointed, unwanted, alternative-view police in their never ending witch-hunt of those within our domain. After all they are just untalented fuck-ups looking to make a name for themselves off of someone’s hard work or more often than not, they are the security services scabby bitches who will expose anyone that they are told to without the least shred of evidence to back their claim."
The bottom line is that Spivey has revealed that the state of play to be even more dire than we have been lead to believe.
Spivey has uncovered a Ministry of Magic which are photocopying pictures of a single person, to convince society that they are two different people, or even multiple people.
The crimes and deception of our Over-Lords is even worse than we thought.
The only question now is what to do about it?
Call in the Russians as Kevin Annett proposes; or call in our own Royal Military Police to investigate. I expect Spivey's findings are of such an unbelievable nature that its going to take sometime before his conclusions sink in, and while I'm afraid it may be too late by then, the ultimate answer lies within ourselves, and the power of us to say NO, we ain't buying their bullshit no longer and we're prepared to do something about it.
I'm sorry for doubting you Spivey!
Chris Spivey in Pictures and Videos
http://guerrillademocracy.blogspot.co.uk/2016/01/chris-spivey-in-videos-pictures.html
Oi Oi, Call A Copper


http://chrisspivey.org/oi-oi-call-a-copper/
Posted by Guerrilla Democracy News at 09:51 No comments:

Calls are growing for the resignation of PM Theresa May

Calls are growing for the resignation of Prime Minister Theresa May only months into her premiership.

Having refused to answer calls to investigate the 788-790 Finchley Road fraud, campaigners are accusing Theresa May of being part of the problem, rather than the solution.

Gordon Bowden personally delivered a dossier of his forensic investigation to BBC TV House and having sent his findings to every news outlet in the UK, campaigners now believe a concerted government cover-up is now in operation to hide what is being billed as the greatest fraud in British history.

While the nation awaits the outcome of the Labour leadership election between Jeremy Corbyn and Owen Smith to determine who will challenge Theresa May in the forth-coming General Election, an unknown challenger and rank outsider, ex-Crime Stopper Brian Setchfield, is gaining momentum as the third choice for Prime Minister, promising to renegotiate the social contract between the public and government and Crown.

With an ever increasing fan-base, Brian Setchfield delivered a scathing indictment of Theresa May's refusal to answer calls for an investigation into extremely serious crimes of murder, fraud and embezzlement, on the Andy Peacher's Radio Show broadcasted to the world on the Freedom Talk Radio platform.

He said, "Mrs May, I have to say that it was very disappointing to not have received any kind of acknowledgement from you and Jenny (Theresa May's PA) as we had truly expected you to have dealt with the matter as a matter of urgency."

Undisclosed sources within the government report that due to the seriousness of the Finchley Road fraud, many politicians and even Royal family members are petrified that their personal involvement will be made public, as were the involvement of Russian President Vladimir Putin, Iceland President Sigmundur Gunnlaugsson and David Cameron's father, Ian Cameron, were made public in the recent Panama Papers scandal.

Although many prominent politicians continue to hide behind the façade of government respectability and Royal appointment, Its only a matter of time before the floodgates break and the Finchley Road fraud is reported across the globe.

Posted by Guerrilla Democracy News at 09:44 No comments: