Terrorists are a Politician's Best Friend.

Whenever a politician needs attention of their own failings disappear, up pops a friendly terrorist to commit an atrocity, which low and behold, conveniently takes the attention away from the politician.


The Conservative Party were on the ropes being battered blue, left right and centre. Calls for George Osborne's resignation were ringing through Westminster and David Cameron was finding it ever more difficult to justify the 'caring and sharing' label he had given himself and the Conservative Party.


Then the friendly terrorists came to the rescue by blowing up Brussels.


You can bet your bottom Euro that the Brussels terror attack will bring Europe closer together and the emotional heart-ache will guarantee the British voters vote 'YES' to stay in the European Union.


Killing Two Birds with One Stone.


After a day of hiding in the shadows, the first thing George Osborne said when he stood up at the Common's dispatch box to justify his U-turn on disability cuts was, "Let me start by offering all our condolences to the victims, and their families, of the attacks in Belgium."


Famed for being a skilful strategist, he used the terrorist atrocity in Brussels to stave off criticism for implementing cuts which would otherwise have starved the most vulnerable people in British society.


While Osborne was keen to stress it was "too soon yet to comment on the details of these attacks," he was more than happy babble on about his buddy David Cameron attending a Cobra meeting, (of which he mentioned he was present), to confirming an increased police presence at key locations to telling us about the increased security at our national borders.


Talk about jumping on the band-wagon.


His glee at the terror attacks conveniently taking attention away from his own failings couldn't be more evident by the way he sat giggling and whispering with the Justice Secretary Michael Cove, whilst opposition MP's berated him over the consequences of his Nazis style austerity cuts.


George Osborne didn't have a care in the world; and why should he? The friendly terrorists had conveniently blown up Brussels, stealing the lime-light away from his own incompetence and failings.

Posted by Guerrilla Democracy News at 08:44 No comments:

WILL BLACKS ROCKS THE UK - AGAIN...


The world's newest Super Rock Hero is back in the UK and thrilling packed audiences across the UK with his original music and rocking personality.

An independent artist born in Calgary, brought up across Canada and now living in Bermuda, Will Black is the next big Rock Star about to break through into the BIG TIME!

Having started off on his mother's six-string acoustic, before getting his own cherry red electric guitar from the Sear's catalog; Will Black has gigged his way across the world both by land and sea.

Signed up to play on Cruise ships, Will now has his feet planted firmly on land having recently become a Dad for the first time.

He said, “As an independent artist I do all my own promotion, so it’s all me. My day job is performing at Hog Penny. During the day I’m spending 6 hours a day building a fanbase. It’s a full time job in itself.”

With his biggest influences being Bruce Springsteen and Bon Jovi, Will Black has two independently produced albums under his belt, with a third “Cry Like Hell' on its way this year.

With original songs beating anything you'll hear in the current charts, Will Black has won a legion of loyal and dedicated fans across the world.

Here are just some of the comments fan's left on his Facebook page:

Prolific in his dedication of his dream of becoming the world's NEW ROCK ‘N ROLL SUPERHERO, Will Black streams his music live whenever he gets the chance.

You can tune into Will performing his weekly online live music request show.

With a down-to-earth attitude and a love for his fans, Will Black is set to become a house-hold name. Describing his music he said, “Its like Bon Jovi vs Aerosmith with a shot of Bruce Springsteen.”


Looking the part and delivering original number one hits, Will Black is the name on everyone's lips.

Posted by Guerrilla Democracy News at 13:21 No comments:

Having himself been criticised by his staunch ally American President Barrack Obama for the “shit” in Libya, PM David Cameron has been forced to publicly defend Katy Bourne in a futile attempt to prop up her failing re-election campaign for a second term as Sussex Police & Crime Commissioner.

“And a final point, the Sussex Police and Crime Commissioner Katy Bourne with her elder's Commission, presented their findings yesterday and one of the things that concern them most is scam and fraud and we've had stories on this programme about people being talked out of tens of thousands of pounds. How much more can we do to stop this happening? Maybe some onus on the banks to just keep an eye on people's accounts.”

To which the PM replied:

“Well its one of those things that we need everyone to play their part. I mean first of all, full credit to Katy Bourne who's doing an excellent job; When I think some people question, you know, are Police and Crime Commissioners necessary, I think it is good there's one person who to whom the police have to account to and who the public can go to if they've got complaints and worries about how we've being policed.”

“FULL CREDIT TO KATY BOURNE WHO'S DOING AN EXCELLENT JOB.”

Its incredible that the PM should be asked about “scam” and “fraud”; its comparable to asking Jimmy Savile how best to combat child-abuse.

Self proclaimed “Peaceful Warrior” and anti-fraud crusader John Paterson has recently been imprisoned for 6 weeks at Brighton's Courts for publicising the 788-790 Finchley Road fraud in which billions and billions of pounds have been syphoned from public funds by David Cameron and his colleagues masquerading as Honourable Members of Parliament.

Its equally incredible that Cameron should high-light the role of Police and Crime Commissioners in which they hold the Police to account and of whom the public can go to if they've got complaints and worries about how we've being policed.

To say Katy Bourne is doing “an excellent job,” while provably failing to hold the police to account and turning her back on the public's complaints and concerns, illustrates perfectly the corruption which is festering deep in the heart of Westminster, 10 Downing Street and Buckingham Palace.

Groomed for high office, PM Cameron isn't the only Conservative to come to Katy Bourne's rescue. Having all the stops pulled out in defence of an up and coming Conservative Super Star, Katy Bourne has been praised by many in the party for her ability to hood-wink a gullible public into thinking the Conservative's have their best interests at heart.

Praised by Home Secretary Theresa May on more than one occasion and mentioned on the floor of the Houses of Commons by Home Office Minister Karen Bradley, Katy Bourne has turned to Tory heavy-weight and grandson to Winston Churchill Nicholas Soames for help.

Clearly looking tired and haggard after months of sleepless night, the picture below shows Katy Bourne, (in the company of constituency Chairman John Belsey), pleading to Nicholas Soames (out of shot) for help to prop up her failing re-election campaign. 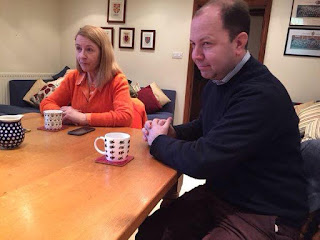 With connections to 10 Downing Street, the defence industry and a sycophant of the disgraced Windsor Royal family, Soames is perfectly placed to facilitate a rescue package which Katy Bourne so desperately needs.

In this second picture of Nicholas Soames sat at a Mid Sussex AGM, the true nature of Nicholas Soames is laid to bare. Looking like a twisted troll and having lived his life off the back of his Grandfather's fame and fortune, it makes sense Katy Bourne would turn to him for help; especially considering she turned to Billionaire crack-cocaine addict Hans Rausing to help in her original election campaign, the same Hans Rausing who went onto hide his dead wife's corpse (who died from a drugs overdose) for 12 weeks (from his house-maids) by covering her decomposing corpse in bed sheets and masking the smell of death with copious amounts of perfume. 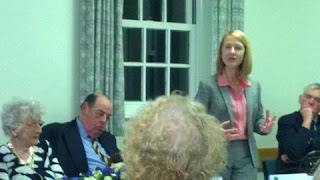 Katy Bourne has friends in sordid places and keeps company with societies most twisted people.

THANK YOU FOR YOUR DONATION! 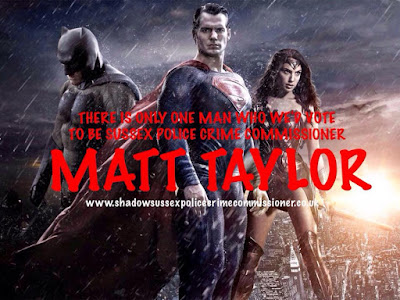 Posted by Guerrilla Democracy News at 01:33 No comments: