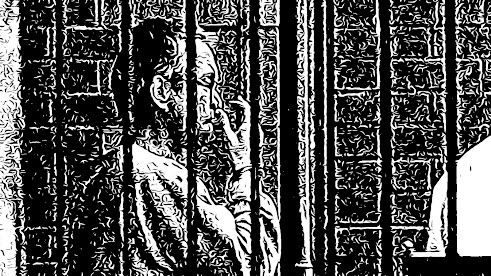 The BBC are reporting Wilfred Wong has been found guilty of kidnapping a child.
Sourced from the BBC News

A gang of people kidnapped a child after one of them believed the infant had been the victim of satanic abuse.

Three people have been found guilty of conspiracy to kidnap the child on Anglesey in November 2020 while three others admitted the charge.

Anke Hill, 51, snatched the child from the street outside their home while Wilfred Wong, 56, threatened the child's foster mother with a knife.

The pair, and four others, will be sentenced in September.

Wong, of Pied Bull Court, Galen Place, Camden, Janet Stevenson, 67, and her husband Edward Stevenson, 69, both of Parnell Close, Maidenbower, Crawley, all denied the charge, but were found guilty by a jury.

A month-long trial was held at Caernarfon Crown Court in July, but a court order prevented any reporting of the case until now.

Karren Sawford, 48, was found not guilty and an eighth defendant, Robert Frith, was found dead in his prison cell last year.

The jury heard how Hill conspired with Wong and Janet Stevenson to kidnap the child from foster care, with the help of the other four.

Hill believed the child had been the victim of satanic abuse in the past, before being fostered, though police investigated and found there was not enough evidence to support this allegation.

The court heard the group was recruited after Hill contacted Wong, who is a campaigner against satanic ritual abuse.

Wong put Hill in contact with Janet Stevenson, a counsellor who specialises in working with victims of satanic abuse.

Hill worked with Wong and the others to organise an elaborate plan, involving code names and a clandestine rendezvous at Bangor railway station, where one gang member arrived by train and followed another through the city at a distance.

At one stage, the conspirators also considered modifying a horsebox with a secret compartment to smuggle the child away.

On 4 November, Hill snatched the child as they returned from school while Wong threatened the foster mother with a knife, before using the same knife to slash a tyre on her car.

The foster mother, who cannot be named for legal reasons, tried to hang onto the child to stop them being dragged away.

She told the court: "The child was terrified. They kept calling my name and asking me to help. I tried to hold on as much as I could.

"But then someone came round the back of me and held a knife to me and told me to let go."

The child was then taken in a car with false number plates to a country lane outside Bangor, while a second car hired by Janet and Edward Stevenson, was waiting to take Hill, Wong and the child towards south-east England.

Going-Hill and Kristine Ellis-Petley acted as lookouts on the bridges from Anglesey to mainland Wales to spot any police activity.

Police were alerted as soon as the child was taken, and quickly managed to piece together the associations between different members of the group.

The hire car was eventually stopped by officers on the M1 in Northamptonshire later that evening.

Wong denied any involvement, saying he was in north Wales for a short walking holiday and had arranged to get a lift back with the Stevensons.

He told the court: "I'd have been more of a liability than a help with any abduction plan. I would have been too old and too slow for that sort of thing."

But the jury didn't believe his story and convicted him and the Stevensons after eight hours of deliberation.

Janet Stevenson's barrister has indicated she would appeal against the verdict.

Posted by Guerrilla Democracy News at 07:51 No comments:

Having called Prime Minister Boris Johnson a satanist outside 10 Downing Street on 15 May 2021, Archer has delivered on her promises and has named her abusers.

All roads lead to Westminster.

A FORMER Brighton vicar has told how child abuse victims confided in him in the 1980's about a satanic paedophile ring that included Tory MP Enoch Powell.

Dominic Walker, who served as a vicar in Brighton during that period, said long-serving Labour MP Leo Abse and former home secretary William Whitelaw were also named as members of the Westminister paedophile network.

Mr Walker, who retired as Bishop of Monmouth in 2013, passed on the information to the Bishop of Durham, the Right Rev Paul Butler, who is responsible for ‘safeguarding’ the Church of England.

Rumours of organised satanic ritual abuse were rife in the 1980s but little evidence has been found to support the claims.

Former home secretary Whitelaw, who served under Margaret Thatcher’s government from 1979 to 1983 and died in 1999, was last year accused of having ordered Scotland Yard to cease an investigation into the paedophile ring that supplied young boys to Westminster figures.

All Tunnels lead to Buckingham Palace

Outside Buckingham Palace on 26 June 2021, Archer named Queen Elizabeth II and her now dead husband, Prince Phillip, a her abusers.

On the most recent march in London on 19 July 2021, attended by more than 100 supporters, Archer said;

"I know why you are doing the Covid Lockdown, you want the children's blood."

"The most powerful additive and dangerous drug on the planet!"

This isn't the first time a member of the Windsor royal family has been accused of being a satanic cult leader, labelled members of the Ninth Circle Satanic Cult by Kevin Annett, he also claimed that both Queen Elizabeth II and Prince Phillip were implicated in the disappearance of 10 indigenous Canadian children in 1964.
Read more: Belgium Court found Queen Elizabeth guilty for the Disappearance of 10 children in 2017
An ex soldier and member of the Order of the Nine Angles, Michael Jingo, claimed publicly in 1994, that he was given a secret mission on behalf of Diana Prince of Wales, to expose Prince Charles as Satan.
Prince Charles is Satan
Posted by Guerrilla Democracy News at 10:06 1 comment:

Hiding in his own home for five days, before Sussex Police threatened to smash his door in, ex-RMP Soldier Matt Taylor was arrested for taking three 15-year-old boys into the woods to have sex with, after showing them videos of beheadings.

Are you Matt Taylor?

He was asked whether he was Matt Taylor, by three teenagers on his way home from the shops one Saturday night, claiming to be big fans of his popular Matt Taylor TV YouTube shows; he had no idea, that his world was about to be turned upside down, for the fifth or sixth time, in as many years.

Walking home and chatting with three teenage boys, (one of whom Taylor recognized as being his daughter's classroom friend, whom he has known all his life), has resulted in a serious allegation being made that Matt Taylor incited three teenage boys to come into the woods with him, after showing them videos of beheadings on his mobile phone.

Asked by Taylor what it would take to prove his innocence, the investigating officer replied that if no extreme pornography was found on his computer equipment, then he would be proved innocent.

Six months on, Sussex Police cite delays in accessing Taylor's IT equipment, to determine the existence of extreme pornography, including beheadings! 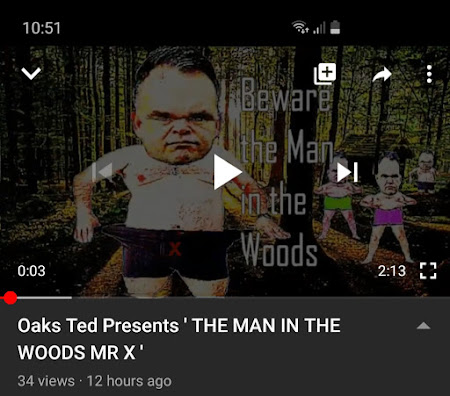 In early February 2021, a video titled 'The Man in the Woods Mr X' was posted by Oaks Ted Presents, depicting Matt Taylor running around the woods, shirtless, with his big belly hanging out, with a distorted extended forehead.

This prompted Matt Taylor to send the Chief Constable of Sussex Police, Jo Shiner the following email on 5 February 2021.

New information has come to light, evident from the video linked below and a screenshot attached, that a person called Chris Brindle, hiding behind the sock puppet account of Grobnob The Troll#1, published a video mentioning 'woods'.
Why would he post something like this, mentioning 'woods,' if it was not pertinent to do so.
The Man in the Woods YouTube video : https://youtu.be/fgg1kYdexYM
Chris Brindle is a part of a group, Adam Lashbrook, Linden Warden and Alan Mitchell included, who have previously admitted to registering Andy Devine dead, by submitted a false death certificate to the Greek authorities, having paid a financial sum to a neighbour to intercept his mail.
By posting a malicious video mentioning 'Woods,' Chris Brindle aka Grobnob The Troll#1, has implicated himself in an alleged conspiracy to get me "locked up," as per investigation by PC Rachel Nelms.
I was arrested on 21 Dec 2020, where after my life was turned upside down, just as it was on Sunday 22 March 2020, when on the eve of the national covid lockdown, I was arrested in a 5am raid, where after all my computer/communication equipment was seized, leaving me totally unconnected to the world, when it was most urgent I was connected.
I hasten to add, that Sussex police choose 22 March 2020, to inflict maximum damage, fear, alarm and distress to me, over a frivolous allegation that was alleged to have taken place in October 2019, and which [REDACTED] wasn't even aware of, until months later.
A year on, all charges have been dropped due to a lack of evidence.
I will be seeking compensation for the distress caused and loss of earnings.

Chris Brindle Admits to Impersonating Matt Taylor to get him into trouble.

In this video, Chris Brindle describes how keen he is that Matt Taylor is arrested and put into prison.

Chris Brindle Admits to being a Satanist.

Chris Brindle isn't the only one who wants Matt Taylor either locked up in prison, or alternatively, committed to an asylum.

List of arrests against Matt Taylor in the last 4 years.

Matt Taylor vehemently denies all charges of taking three teenage boys into the woods to have sex with, after showing them videos of beheadings.

Arrested on 21 December 2020 and released the next day, Sussex Police dropped the charge of Inciting Children into Sexual Conduct, to Common Assault, alleging Taylor tapped a teenager's nose and said, "I am not a paedophile!"

Posted by Guerrilla Democracy News at 04:00 No comments:

Posted by Guerrilla Democracy News at 13:35 No comments:

SUBSCRIBE TO TAYLORTV
Posted by Guerrilla Democracy News at 03:53 No comments:

Posted by Guerrilla Democracy News at 03:34 No comments:

SUBSCRIBE TO TAYLORTV
Posted by Guerrilla Democracy News at 03:27 No comments:

SUBSCRIBE TO TAYLORTV
Posted by Guerrilla Democracy News at 03:15 No comments:

Posted by Guerrilla Democracy News at 03:08 No comments:

Posted by Guerrilla Democracy News at 03:01 No comments:

Welcome to TaylorTV - What's your Dream?

SUBSCRIBE TO TAYLORTV
Posted by Guerrilla Democracy News at 16:20 No comments:

SUBSCRIBE TO TAYLORTV
Posted by Guerrilla Democracy News at 15:37 No comments: