DON'T BLAME POLITICIANS
(They're only perverts, criminals and sexual deviants...)

This famous quote which Michael Winner never said, illustrates perfectly why people should stop blaming politicians for the woes and foes in society. After all, they are only the middle management of a power structure controlling the world and have as much influence in the future of mankind, as does the average Joe off the street.


Kapos, as in prisoners in Nazi concentration camps, working for the SS. Their job was to supervise forced labour and carry out administrative tasks in the camp. They’d be spared physical abuse and hard labour, provided they performed their duties to the satisfaction of the SS guards. They had access to certain privileges such as civilian clothes, more food and a private room. Their sole purpose was to cut costs by making the camps run themselves with as little SS personnel as possible. Nazi philosophy has always been to divide and rule, to play one against the other, victim against victim. The Kapos were pitted against their fellow prisoners in order to maintain the favour of their SS guards. If they weren’t up to the job, they’d be returned to the status of ordinary prisoner. The irony is that once the camps were empty and there were no more to load onto the trains, there was no more need for them and ultimately their fate was the same.

This is the life of a politician.

Politicians are the least of our problems.

If you want to blame anyone for the woes and foes in society, you have to go to the very top.

Remember who the politicians, military and judicial all pledge allegiance to... The Crown, sitting on the head of the Queen.

This inconvenient truth has been made all the more crystal clear this week with a Court order revealing the truth of the Queen's power.

After much stalling and manoeuvrings, 10 Downing Street were forced to reveal the extent of the Queen and Prince Charles secretive powers of veto over every aspect of British life.

Those in the know have known for centuries that the Crown has ultimate control over all it's interests.

Politicians have been ordered to lie to the electorate to cover-up this blatant fact...

“The Queen's role in Parliament is ceremonial and she has no power to interfere with Parliamentary business,” has been the aged old line.

“Prime Minister's past and present visit the Queen once a week as a symbol of respect. They do not attend to receive their weekly orders. Don't be preposterous,” they would reply if ever the suggestion that the Queen holds the true power is ever made.

Even after the truth has been revealed, A Buckingham Palace spokeswoman attempts to continue the lie: "It is a long established convention that the Queen is asked by parliament to provide consent to those bills which parliament has decided would affect crown interests. The sovereign has not refused to consent to any bill affecting crown interests unless advised to do so by ministers."

To imply the Queen only revokes her power of veto on the advice of ministers is a blatant lie, to carry on the Status Quo.

Lets get it straight: The Seal of Approval is required from the Crown over every aspect of British and Commonwealth life.

In one instance the Queen completely vetoed the Military Actions Against Iraq Bill in 1999, a private member's bill that sought to transfer the power to authorise military strikes against Iraq from the monarch to parliament.

The though of Power transferring from the Monarch to the Parliament, especially when it comes to war, is absurd and obscene as far as the Queen's considered.

No wonder she admits to never having the time to read a book. As she admits herself, She's too busy reading the contents of the governmental red boxes.

As Andrew George, Liberal Democrat MP for St Ives reveals, "This is opening the eyes of those who believe the Queen only has a ceremonial role."

"It shows the royals are playing an active role in the democratic process and we need greater transparency in parliament so we can be fully appraised of whether these powers of influence and veto are really appropriate. At any stage this issue could come up and surprise us and we could find parliament is less powerful than we thought it was."

Of-course that will never happen, but its good to let the politicians believe they have a say.

So stop blaming politicians. They are middle management Kapos, who are as much in the dark as the rest of us.

If you want to blame anyone, blame the Queen Elizabeth II. Blame the Crown... 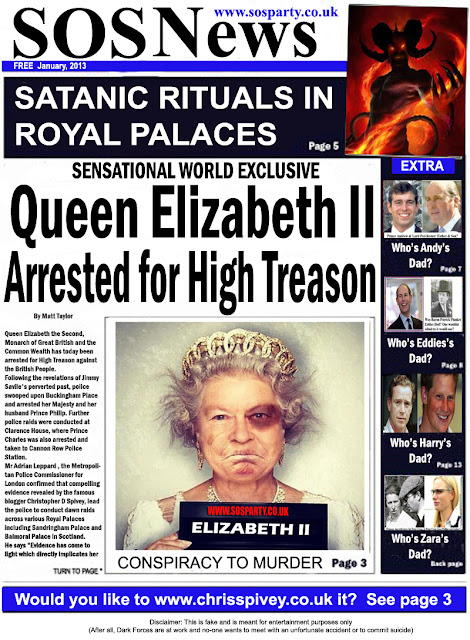 Queen Elizabeth the Second, Monarch of Great Britain and the Common Wealth, has today been arrested for High Treason against the British People.

Following the revelations of Jimmy Savile's perverted past, police swooped upon Buckingham Palace and arrested her Majesty and her husband Prince Philip. Further police raids were conducted at Clarence House, where Prince Charles was also arrested and taken to Cannon Row Police Station for questioning.


He says “Evidence has come to light which directly implicates her Majesty and her husband Prince Philip and her children with Satanic rituals involving young children.”

Following the Sunday Express revelations that the Royal's close friend Jimmy Savile conducted Satanic rituals in attendance with other unspecified persons, prompted a number of specific allegations being reported to police.

Queen Elizabeth Windsor, who's real family name is Saxe-Coburg-Gotha, has been revealed to be an imposter to the British Crown.

A descendent of a Belgium Royal dynasty called the House of Wettin, its been alleged that the true Royal blood-line, leading down from the renowned King Arthur of folk-lore, has been fraudulently covered up to allow the Wettin Royal Dynasty to fraudulently claim the British throne.

Queen Elizabeth who heads Britain's most secretive family, has been accused of being a compulsive adulterer. Following seized love letters revealing that in fact Prince Andrew's real father to be Lord Porchester and Prince Edward's real father to be Baron Patrick Plunket.

The charges of High Treason refer to the specific charge that in 1972, she knowingly allowed the corrupt paedophile Prime Minister, Edward Heath to sign away the British people's sovereignty to her ancestral Royal Dynasties of Europe.

The Queen can technically be hanged for her crimes, as the crime of High Treason in British Law still carries the death penalty.

Sources inside Scotland Yard say the Queen remains stubbornly silent, as she has done so throughout this unfolding scandal.

She is being held indefinitely under anti-terrorism laws and its expected that further charges of Conspiracy to Murder are also being prepared against her following the release of Keith Allen's documentary 'Unlawful Killing' which points to a cover-up of Princess Diana's murder and subsequent inquest.

Specific charges of murder have already been charged against Prince Philip and Prince Charles, following the discovery of a hand-written letter by Princess Diana which states that Prince Charles is planning to kill her in a car accident.

Police are also investigating the apparent murder of a 15 year of Eastern European girl who's dead body was found on the Sandringham ground on New Year's day 2012. Its believed that the girl escaped a Satanic ritual being conducted as a New Year's celebration within the Palace, and died from hypothermia while hiding for her life in a ditch outside the palace grounds.

The arrests have caused shock and disbelief throughout the Nation. Demonstrations outside Buckingham Palace have seen tens of thousands of people coming out and venting their angry.

Armed police were forced to open fire on the crowd as they pushed against the palace gates.

Further arrests are expected, including close friends of the Royal family such as Rolf Harris and ex politicians, namely Gordon Brown and Tony Blair.

Matt Taylor the leader of the SOS Party, and recognised by many as the next Prime Minister of Great Britain says “The collapse of the British Establishment is happening all around us. This is the end we have all been waiting for.”

A spokesman for the Windsor family says “Her Majesty fervently denies all charges against her and her children.”

David Icke has also released a statement saying “I told you so.....”

Disclaimer: This story is fake and is meant for entertainment purposes only.(After all, Dark Forces are at work and no-one wants to meet with an unfortunate accident or to commit suicide)