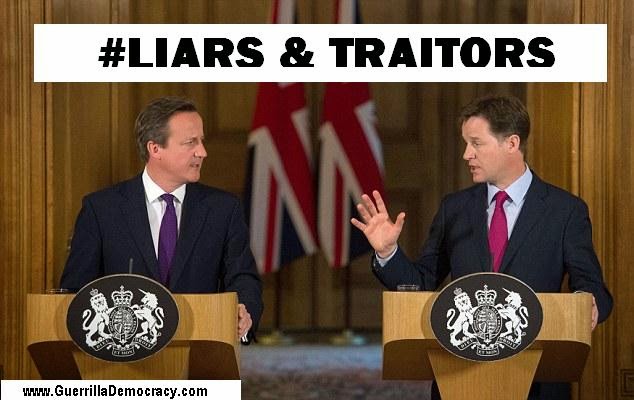 Prime Minster David Cameron and his side-kick Nick Clegg have gone on the offensive to quell any continuing out-break of Westminster child-abuse scandal, by rushing through unprecedented Surveillance Laws in defiance of a EU Law ruling that it’s illegal to hold the public’s data.

Falling back on the credibility of state to hide their panic over child-abuse allegations coming out on what seems to be an hourly basis; Batman and Robin held a rare joint conference to distract the public from looking left to look right.

“I am simply not prepared to be a prime minister who has to address the people after a terrorist incident and explain that I could have done more to prevent it.”
Said Batman!

Lying to the world, David Cameron and Nick Clegg proved themselves to be traitors to the British State by selling the Woolwich Incident as a terrorist incident.

While many reassure themselves that Chris Spivey’s “Look back in Anger,” is full of supposition; the brutal truth of the matter remains:

The Woolwich Incident was a false flag event orchestrated by British Secret services, with the knowledge and collusion of Government and Monarchy, to incite radical hatred and form the basis of further snatches against our human rights, as seen with the emergency introduction of the Surveillance Laws.

In answer to my best friends supposition that Chris Spivey’s exposé “Looking back in Anger,” is supposition I say, “Chris Spivey has proved it. Anyone can take him to court and see for themselves that it’s all true!”

Over to Chris Spivey, (having published yet another article about the Woolwich fake called, “Taking the Micks”) to defend himself:

“How much more proof does anyone need before they cotton on that they have been taken for a fucking ride?”

Coming on the back of the ridiculous news that all electronic equipment must be charged before being allowed on a plane; it reconfirms one shameful and embarrassing truth;

People really are thick as Shit…

Its an insult to any intelligent mind to imply all those million pound X-ray machines installed at airports cannot determine what is and isn’t a bomb.

They may as well send the X-ray machines back; get a multi-million pound refund and ask all airline travellers to arrive at the airport wearing only a towel to hide your modesty, as the ultimate airport security measure.

People will still fall for it and agree that such ridiculous measures are needed to keep them safe from a make believe enemy.

Stealing a line from Craig Murray and his ‘Water Damage’ blog:

“It is not that they expect us to believe them – they just don’t care. They have the power, and we don’t.”

FUCK YOU, WE ARE IN CHARGE; NOT YOU!

Sticking their fingers up to EU Law, Batman and Robin turned evil and flew in the face of The Court of Justice’s judgment that the Data Retention Directive disproportionately infringes on individuals' privacy rights.

Infringing upon our individual privacy rights under a false guise; Batman and Robin propose to tear up our fundamental human rights for their own insidious reasons.

The sheer audacity of evil took us to a new level as the world watched in shock horror as David Cameron justified his decision on protecting the nation from:


WHAT UTTER TRIPE; BUT THE BRITISH PEOPLE CONTINUE TO BUY IT!

With cross-party agreement all three parties - proving they are all in it together, they are now no longer bothering to hide their crimes from view, because it’s been proven by the mainstream public’s response that the UK’s population are nothing more than brain dead zombies, who readily agree to be bent over backwards and sodimised on a daily basis.

ARE YOU A VICTIM OR A SURVIVOR?

MPs will vote on Monday and Tuesday; let’s trust the British People wake up between now and then and open their eyes to the insidious criminality at the heart of the British Government and Establishment.

Payment Due: Word counted at about 860, this article contains public interest information and is available for sale for the minimum price of £860. If you wish to purchase this article please contact the copyright holder at www.taylorservices.org.uk. If you enjoyed reading this please feel free to make a donation to ensure Guerrilla Democracy News continues to publish news you won’t hear from BBC, Channel 4, ITV and Sky TV News. All donations are greatly welcomed at donations for Matt Taylor here. Thank you and please share and tell your friends.
Posted by Guerrilla Democracy News at 03:15