THE ELITE OF THE AV EXPOSED AS PAWNS IN A MI5 PSY-OPERATION.


UK Column News, the leading news source of the alternative view (AV) movement have become embroiled in an embarrassing smear campaign, following claims they have been pawns of a Mi5 sponsored psy-op to discredit the AV movement which they themselves proclaim to champion. 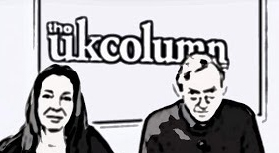 Following a critical response to a UK Column news article written by Mike Robinson, from Matthew Daniel, the team at UK Column including the well respected Brian Gerrish and Lou Collins took it on themselves, (for some inextricable reason), to accredit the article to on-line journalist Matt Taylor.

THIS IS JUST UNBELIEVABLE.

And UK Column aren’t alone in assuming that because Matt Taylor’s name on his certificate reads MATTHEW DANIEL TAYLOR, that any article published by Matthew Daniel is evidently the work of Guerrilla Democracy New's editor Matt Taylor; whose got enough work of his own to get on with than writing bitchy letters to the UK Column about Mike Robinson’s journalist skills.

FFS- GIVE ME STRENGTH.

Spooks at Mi5 will be belly laughing in amusement to know they fooled the elite of the AV movement with a well timed article published to exacerbate divisions evident by the clashes between Matt Taylor, Ian R Crane and Brian Gerrish at the AV5 Truth conference.

IT COULDN’T HAVE BEEN EASIER.

Proving they’ve been pawns in a secret Mi5 psy-operation, Mike Robinson from UK Column has refused to answer my question:

“You don't think I was the Matthew Daniel who wrote that critical piece about your Re-Set article, do you?”

Hench-man Darren Nesbitt, one of three Darren Nesbitt’s at AV5, answered the question which Mike Robinson has so far evaded to, “I am I am... you got me.”

Being a £15 a year subscriber of the UK Column newspaper, Matt Taylor read the article ‘Re-set,’ and thought the piece was a well written article, and rated Mike Robinson as a top on-line journalist.

“I remember watching Mike Robinson responding to the criticism he got live on air thinking, ‘cool at least it isn’t me he’s talking to.’ Then to my horror months on, I learn that he was in-fact talking to me, Matt Taylor all along!”

YOU CAN’T MAKE THIS SHIT UP!

The AV’s leading news team are make up of:

These bunch of so called “leading AV” journalists put two and two together and came up with Matt Taylor.

“I should be flattered,” said Matt Taylor, “but I’m not. I’m insulted and shocked. I only write for Guerrilla Democracy News and no one else.”


If you want me to write your story because no one else will, then get in touch at:


Defying journalistic logic, the UK Column news team has smeared another AV on-line journalist for no other reason than their own sheer stupidity and ego!

They have behaved like the sheep they proclaim not to be and blindly put two and two together and came up with Matt Taylor.

How on Earth can the work of Matthew Daniel be attributed to Matt Taylor, if not by idiots?

Everyone in the AV community who thought that Matt Taylor wrote Matthew Daniel’s article to the UK Column news is short of a screw.

WHERE IS THE PROOF?

They have all demonstrated to the Powers that Be what a bunch of stupid people they really are:

Yeah right Ian R Crane, you’ve just done the establishment a massive favour by rubbishing your own movement you fool!

The next big talent to break into the big time diplomatically responded:

To which Matt Taylor replied, “Cool because it means a lot to me to know that someone I've met and call a friend wouldn't think that I would scope so low to bitch about someone in such an insidious way.”

Though the most venomous of all doubters is Darren Nesbitt who wrote:

I repeat to the Column News editorial team, how did you come to the conclusion that I am Matthew Daniel?

WHERE IS YOUR PROOF?

Are the spooks belly-laughing in GHQ reading Guerrilla Democracy News knowing that a well timed article bruising the delicate ego’s of the UK Column team, was all it took to drive a wedge through the AV movement?

Column News has well and truly shown themselves up to be idiots. And Darren Nesbitt even worse, a bully!

This is either a case of the UK Column and other leading members of the AV elite falling foul of a black psy-op to discredit the good work of Guerrilla Democracy News or a journalistic fuck up by the UK Column news-team.

Either way it doesn’t look good, as Matt Taylor reacts to having his good name dragged through the mud…

“I want a full a public apology from UK Column News for accrediting me with Matthew Daniel's article criticizing Mike Robinson's ‘Re-Set’ article.

I also want an apology from Darren Nesbitt.

It would appear that they have all been pawns in a Mi5 sponsored psy-op against the AV movement.

And they call themselves Journalists!?! Didn't anyone think of asking me?

THIS GOES TO THE ‘AV’ ELITE TOO.

If anyone else in the AV Elite believed I wrote under the name Matthew Daniel then you owe me an apology too.

How many other people have the Column news team and Darren slagged Matt Taylor’s name off to?

As Matt Taylor puts it, “It’s an insult to a writer to have another person called 'Matthew Daniel' accredited to you. How would you like it if someone wrote a shit poem and said Simon Welsh wrote it?”

How would any writer or any other creative person like an artist, photographer or musician like it if someone with another name put out a product and other people started a smear campaign believing that another party, (completely unconnected to the person except by part-name), of being that person.

I REPEAT TO COLUMN NEWS, WHERE IS YOUR PROOF?

“My name has been dragged through the mud due to the stupidity of UK Column News and the smear campaign they have waged, under the belief that I am the Matthew Daniel who bruised their delicate egos.”

“Its absurd and I’m considering taking legal action against them,” said Matt Taylor.

NOW IS THE TIME TO UNITE!

“Hey lets move on. We’ve had great news today that we are winning the fight against child-abuse in . But now we must stop our squabbling and unite to save the children of .

You think the British establishment was bad raping our children. They are blowing children to bits in so that British Gas can exploit their land.

Please watch and share the video below, thank you. I am Matt Taylor, not Matthew Daniel.”