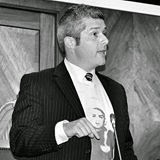 Michael Doherty, anti-paedophile crusader, law expert and general hero, has unearthed an insidious scam which our caring and sharing government are perpetrating against the UK's motorist.

If anyone wishes to read about the latest HIGHWAY robbery scam to extract 'gold' from the British motorist please read the following document.

Share around because undoubtedly the use of these 'variable speed' cameras on the British Motorways is a scam.

The cheeky bastards have even named the system MIDAS - hidden in plain sight - turning the travelling public into GOLD.

Having “uncovered an amazing scam against motorists,” he puts the smile back on motorists face with the welcome news to “expect millions to be handed back very soon...”

Having written it all up and with a journalist ready to publish, Michael Doherty blows the whistle on the greatest scam against motorists ever.

Throughout the UK motorways have had variable speed sections placed to restrict motorway speed limits at times of congestion or incidents. Notification is by way of overhead gantry signage and enforcement is by way of GATSO cameras also installed into the motorway gantries. It would appear MIDAS has most certainly turned the British motorist into pure gold for the operators of this system. [I certainly think motorists will find the acronym offensive]

The M1 motorway in Bedfordshire has been the focus of my examination, after I noticed the signals being switched on when traffic was free flowing. As a result I decided to examine the matter Freedom of information requests for number of PCN's issued by bedfordshire police controlled sections of M1 (roughly from m25 thorough to Milton Keynes) 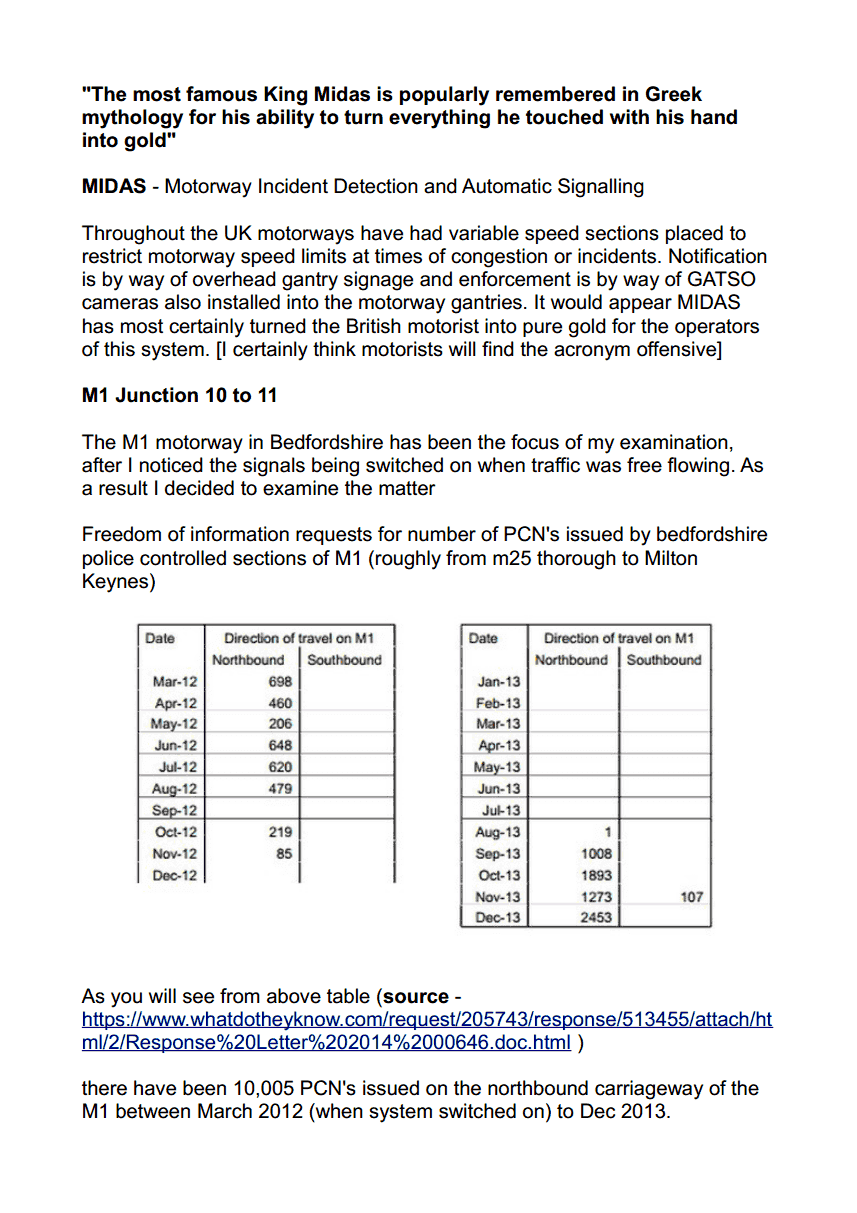 Staggeringly there have only been 107 tickets issued for the southbound carriageway, the disparity in itself must be a serious cause for alarm bells to ring...

But when you dig further, it appears virtually ALL these PCN's have been issued for Junction 10 to 11 travelling northbound ! 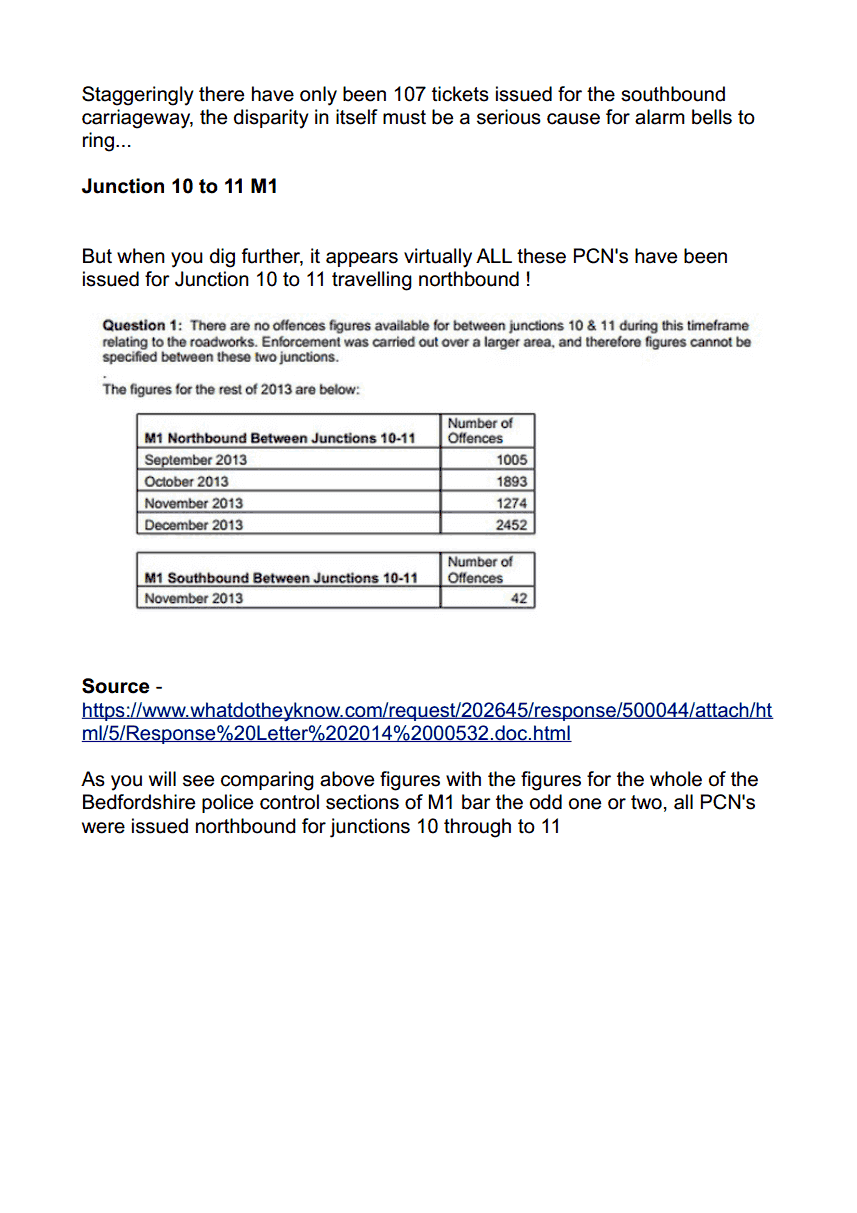 As you will see comparing above figures with the figures for the whole of the Bedfordshire police control sections of M1 bar the odd one or two, all PCN's were issued northbound for junctions 10 through to 11

When I discovered this information, I sought out information on the MIDAS control system (for junction 10 to 11) including the data for the exact time the PCN was issued for my alleged speeding offence. I was staggered to see the system data showed continual FAULT signals from the system data and continual fluctuations, over short time periods between the system settings of CONGESTION, INCIDENT or CLEAR. It would appear this system simply doesn't work. (data attached for MIDAS readings in spreadsheet) 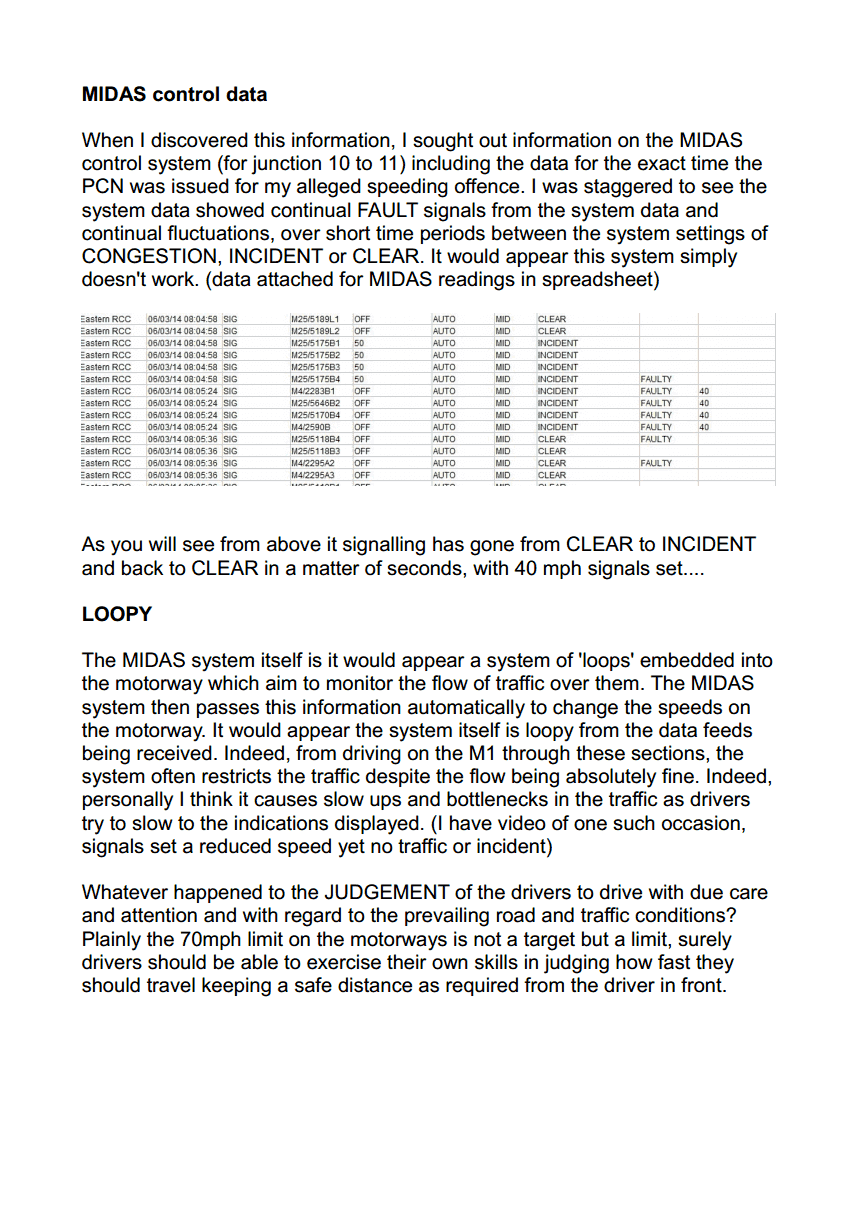 As you will see from above it signalling has gone from CLEAR to INCIDENT and back to CLEAR in a matter of seconds, with 40 mph signals set....

The MIDAS system itself is it would appear a system of 'loops' embedded into the motorway which aim to monitor the flow of traffic over them. The MIDAS system then passes this information automatically to change the speeds on the motorway. It would appear the system itself is loopy from the data feeds being received. Indeed, from driving on the M1 through these sections, the system often restricts the traffic despite the flow being absolutely fine. Indeed, personally I think it causes slow ups and bottlenecks in the traffic as drivers try to slow to the indications displayed. (I have video of one such occasion, signals set a reduced speed yet no traffic or incident)

Whatever happened to the JUDGEMENT of the drivers to drive with due care and attention and with regard to the prevailing road and traffic conditions?

Plainly the 70mph limit on the motorways is not a target but a limit, surely drivers should be able to exercise their own skills in judging how fast they should travel keeping a safe distance as required from the driver in front.

As you will undoubtedly be aware, traffic enforcement devices require Home Office Approval as they are revenue earning. You may be staggered to learn that the MIDAS system has NO approval. The home office claim that: In MIDAS controlled sections of the motorway, the MIDAS system is not an integral part of the system...

This clear oxymoron seems to suggest the MIDAS system that actually controls the setting of a restricted speed is not part of the system...

The Highway agency claim that 'compliance' is achieved as a result of them installing the system, as per the manufacturers guidance. So the motorist is at the behest of the manufacturer of the MIDAS gold grabbing system, developed by the system manufacturer, no doubt sold on the basis of 'return' that the exchequer will obtain.

The area of Junction 10 is close to Dunstable, an area frequented in history by the notorious DICK TURPIN (highway robber). It would seem that those travelling the same path are being met with the modern day equivalent of Highway robbery. The cost to the motorist of those 10,000 PCN's would be in the region of £1 million minimum. Add to that the added ongoing insurance costs following points to the licence and you're running into many millions for just one junction on the M1

I trust you find the information of use to evidence the sham of these variable speed sections that have rolled out across the country, plainly extorting more easy money from the already overburdened motorist.

Motorists should use this information to challenge current and historic PCN's issued on junction 10 and 11 of the M1. No doubt the same applies to other areas of the country where this MIDAS system is operational.