MATT TAYLOR, "PLEASE VOTE FOR ME." 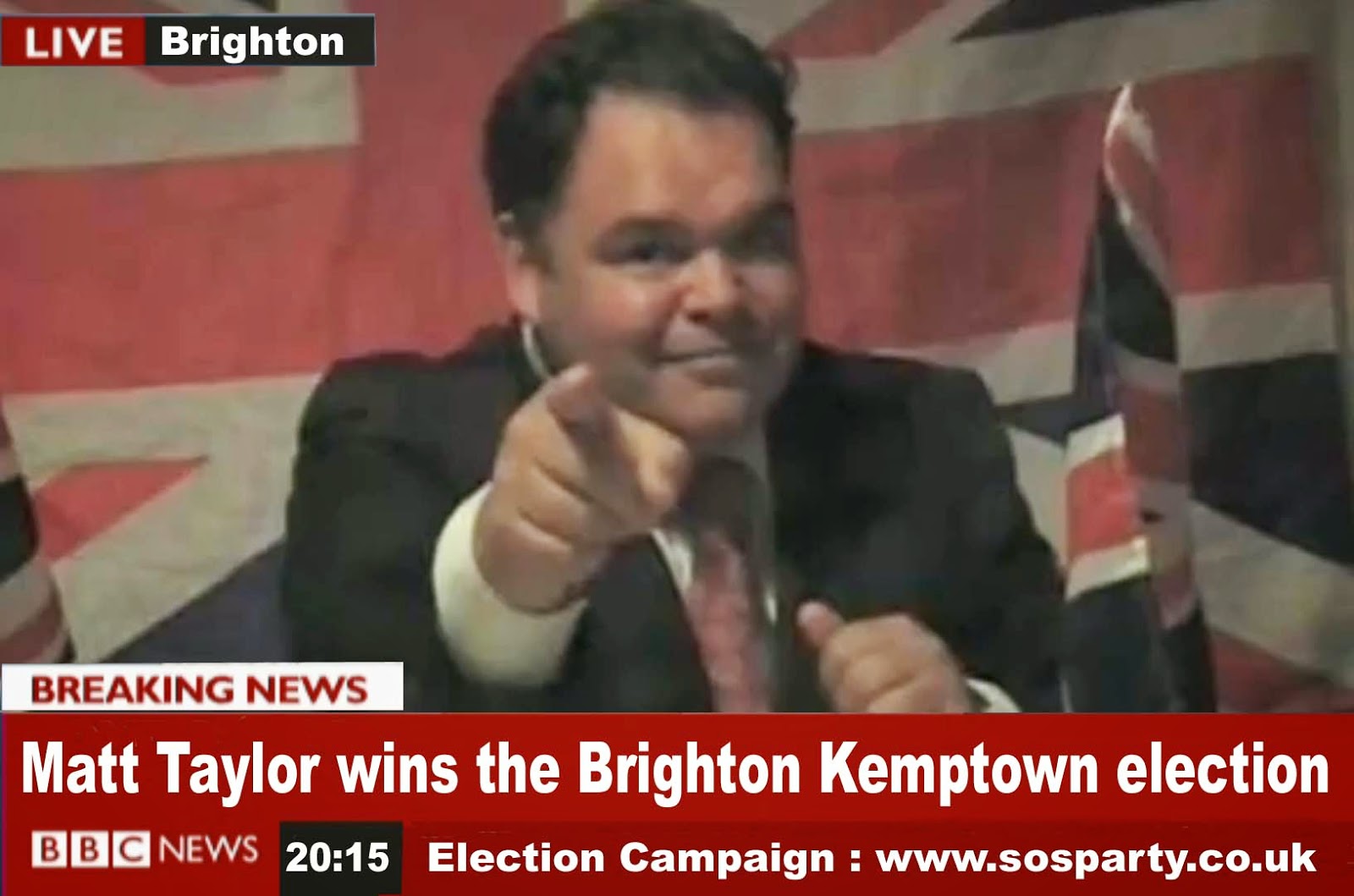 The Brighton Kemptown election is hotting up.
Conservative Simon Kirby, the sitting MP is riding high on the crest of the wave, following the news that the Royal Sussex County Hospital will get their promised £420 million investment and Labour’s Nancy Platts is pulling out all the stops to save local fire stations from closure.

With under a year to go, the 90,000 constituents of Brighton, Kemptown, Peacehaven, Ovingdean, Woodingdean and Rottingdean have a choice to make.

TO CARRY ON WITH THE STATUS QUO, OR TRY SOMETHING DIFFERENT.
THE SEVERITY OF THE SITUATION IS UNDENIABLE.

• By re-electing Simon Kirby we will continue to suffer from the Nasty Nazi policies of austerity.
• To elect Nancy Platts would mean much the same.
• Davy Jones, the Green Party candidate hasn’t much to say.
• And UKIP Ian Buchanan is a Freemason, what more is there to say?

THE CHOICES ARE STARK- MORE OF THE SAME OR SOMETHING DIFFERENT.

Standing as an independent candidate on an anti-corruption platform, I am that “Something Different” you’ve been waiting for.

Unlike either Simon or Nancy, I am a man of the people, because having been brought up in a single parent household, in a council house, working in low-paid jobs and having gone to state schools, I know better than anyone the hardships and issues which the common people face.

THE COUNTRY HAS NEVER BEEN IN SUCH DANGER.

We are at the edge of a cliff, looking over into oblivion. Before us are three spikes in the road.

THE DANGERS OF VOTING FOR THE STATUS QUO.

Simon Kirby has demonstrated where his loyalty lays by voting for austerity for the last 4 years.

A VOTE FOR SIMON KIRBY WOULD MEAN:

• Fracking across the country, polluting our national water supply and contaminating our country-side.
• More unnecessary austerity which robs the people of their wealth and drives thousands to suicide and food banks.
• More statute regulations which will curtail our freedoms of speech, assemble and thoughts.
• More corruption in national and local government.
• More pain and injustice to the common people.
• More war, death and destruction.

A VOTE FOR NANCY PLATTS WOULD MEAN:

• A lame duck in Parliament.
• Personal advancement for Nancy and her friends.
• The same policies as the Tories but with a different spin. 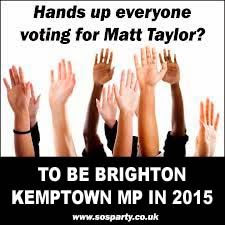 A VOTE FOR MATT TAYLOR WOULD MEAN:

• An independent voice in Parliament.
• A brave voice which supports the common people.
• A crusader against corruption.
• A cure for Cancer.
• A debt free economy.
• Wealth and prosperity for all.

Unlike Simon Kirby and Nancy Platts, Matt Taylor already made good on his promises and by setting up the Shadow Sussex Police and Crime Commissioner office (SSPCC) in 2012, and has shown his dedication towards anti-corruption.

"Unlike any other politician in Sussex, I’ve listened to what the people are saying and I’ve acted upon their words," he said.

"The people of Sussex are telling me that corruption is strife and that they are worried for the future and their children’s future."

Having taken their complaints to Simon Kirby and others, they have realized that no one else cares.

Unbelievably and in his capacity as SSPCC, he broke the news that the ex Chief Constable of Sussex, Martin Richard’s retired early due to a misconduct charge.

READ MORE: MEDIA BLACKOUT IN SUSSEX.
Having (proverbially) screamed from the top of his voice from the rooftops, not one soul in Sussex has bothered to investigate this scandal.

IS THIS REALLY WHAT 90,000 CONSTITUENTS WANT?

Matt Taylor said, "As your MP my voice would be heard because I’d no longer be shouting from the proverbial roof-top, but I’d be shouting in the centre of Parliament, where my voice will have to be heard.

If you think corruption doesn’t affect you, then you are a fool. Corruption affects every single one of us. And I’m the only option you have in the general election of 2015 to put a stop to it."

I NEED YOUR VOTES NOT YOUR HITS.

Now a lot of you would have noticed my campaign against Queen Elizabeth II. And I expect I would have lost a lot of your votes, even before I’ve had a chance to win them.

I’ll be the first to admit that I became intoxicated with the hits. The more I wrote about the Queen the more hits I got. It took my campaign manager to remind me that I need votes not hits.

If I have offended you with my controversial articles about the Queen, I’m sorry.

As the daughter of King Paki from New Zealand chastised me:
“May I ask what is it that you hate the Queens family and why do you disrespect them…..so much?
If you derail the train….something gonna happen and you as our Maori King we as the people will suffer because of your pig headed crap….so if I am missing something here please explain…and let me be the judge of it….Just don’t get it.”

I chose to support Kevin Annett and the International Tribunal of Crimes and Church and State (ITCCS) because as an anti-corruption politician, I believe no one should be above the Law, including royalty.

I’ve demonstrated that I am ready and willing to take on anyone and everyone who’s involved in corruption, including the Queen of England.

Now while this stance may lose me votes, for the simple reason that people just can’t imagine our Queen ever breaking the Law, I’ve done it because people are saying the Queen has broken the Law.

THIS PROVES THAT I AM WILLING TO LISTEN AND ACT UPON WHAT IS BEING SAID TO ME.

Tell Simon Kirby you are a victim of institutionalised corruption and he’ll shrug his shoulders and say he can’t help, as he did when I wrote to him about my concerns about an O.A.P who just happens to be the main witness in the Katrina Taylor murder of 1996..

• Read more: Who is Nancy Platts?
Both Labour and Conservative are in it together. Vote for one and you’ll get the other.

I need your vote because I can do more for you in a position of power, than what I can without power.

It’s with this in mind that I need you to book me. Book me and give me the opportunity to convince you I’m the best person for the job.

I need as many votes as I can get, so please book me and let me convince you that I’m the best for the job.

Calling all like minded independent minds- We need you to stand against the Conservative MP Mike Weatherley in Hove and against the Liberal Democrat MP Norman Baker in Lewes.

Please get in touch and let’s start talking.

Posted by Guerrilla Democracy News at 10:44