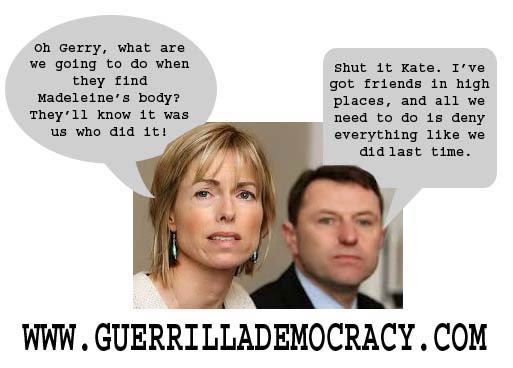 Gerry and Kate McCann have made an extraordinary outburst on their Official Find Madeleine Campaign Facebook site, towards the UK’s national Press, “dismayed with the way the media has behaved” over the last couple of days in relation to their daughter’s case.

In an unexpected twist which most observers are calling a prank, Gerry and Kate McCann are said to be in “distress” over the “media’s interference.”

Uncertain as to what specifically Gerry and Kate are eluding to, much has been said about the spelling of their daughter’s name. As the Official Find Madeleine Campaign Facebook webmaster said, “For the press, it's M-A-D-E-L-E-I-N-E; not Maddie!”

The Cracks are beginning to Show. 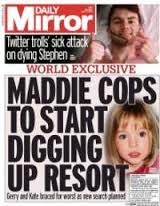 While Gerry and Kate maintain, “There is an on-going, already challenging, police investigation taking place and media interference in this way not only makes the work of the police more difficult, it can potentially damage and destroy the investigation altogether – and hence the chances of us finding Madeleine and discovering what has happened to her,” observers are left scratching their heads asking the obvious question, “If this was really written by the McCann’s then it would be rather hypocritical of them considering the way the McCann’s have been milking the media for publicity over the past “7th Anniversary” weekend?”

Without making a differential between what the mainstream media are reporting and what the alternative media are reporting, Gerry and Kate McCann would be aware of Chris Spivey and his debunking of the preferred version of events as reported by the Daily Mirror, Daily Express and Daily Mail.

Read more: The McCann con, the best of a bad lot and Tracey– Who the fuck is Tracey.

Having racked up an readership of 6 million and counting, Chris Spivey is correct in saying, “It is no fucking wonder that people are turning to the AM in droves…”

With 10% of the UK population now reading the alternative media, is it any wonder that Gerry and Kate McCann are feeling the heat and turning on the press which has bent over back-wards to help them cover-up what really happened to their daughter for the last 7 years? 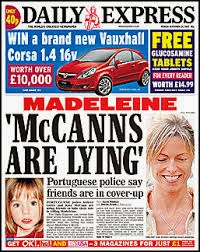 In an Australian Interview we get a glimpse of what really happened that fateful night 7 years ago.

Asked by the attractive Australian female presenter, “Did you kill your daughter?”

Gerry answers, “No, that’s an emphatic no.”

It’s interesting that Kate doesn’t answer the question, just as she didn’t answer 48 questions put to her by the Portuguese Police.

Gerry McCann continues in his defense, “I mean the ludicrous thing is, um what’s been purported from Portugal is that Madeleine died in the apartment by an accident and we hid her body.”

Now it’s again interesting that rather than answer this most important of questions, Gerry asks his own of which only he and Kate would know.

“Well when did she have her accident and died?”

Gerry McCann then goes onto make a blatant lie by saying, “Because the only time she was left unattended was when we were at dinner.”

This is a lie because we know Madeleine chastised her parent’s for leaving her unattended the night before, “Why didn’t you come when Sean and I cried last night?” she said.

Gerry continues to ask the questions that only he and his wife know the answers to, “If she died then, how could we have disposed of her or hidden her body when there was an immediate search.”

“It’s just nonsense,” Kate pipes in, before Gerry continues to ask the questions which only he and Kate know the answers too, “So if she had died when we were in the apartment or fell and hit something, why would we cover that up?”

Yes, why would two successful professionals want to cover up the fact they left their children “unattended,” and that as a result, their eldest child had a fatal accident?

Kate McCann now takes over by boosting of her achievements 7 years ago, “It gets even more ludicrous that we obviously hidden her somewhere so incredibly well that nobody has found her.”

“Incredibly well,” the Australian interviewer commends her, before Kate continues, “We’ve hid her so well that we then decided to move her in the car which we hired weeks later and you know, it’s just ridiculous.”

Gerry and Kate’s statement in full.

We are dismayed with the way the media has behaved over the last couple of days in relation to our daughter’s case. There is an on-going, already challenging, police investigation taking place and media interference in this way not only makes the work of the police more difficult, it can potentially damage and destroy the investigation altogether – and hence the chances of us finding Madeleine and discovering what has happened to her. As Madeleine’s parents, this just compounds our distress. We urge the media to let the police get on with their work and please show some respect and consideration to Madeleine and all our family.

Thank you.
Gerry and Kate

To understand and learn more about the Madeleine McCann story, check out The McCann Files. http://www.mccannfiles.com/index.html

There is more to this story than we are being led to believe.

Posted by Guerrilla Democracy News at 05:40