MUTINY IN THE RANKS.

British soldiers are facing up to the terrible truth that the Queen whom they pledged to serve, protect and obey, has been found guilty by an International Common Law Court of Crimes against Humanity.

Guardsman Vivian Cunningham, a serving soldier in the Irish Guards Regiment in Aldershot, Hampshire, did what any good soldier must do and reported what he knew to his Commanding Officer Captain Murrell.

According to Guardsman Cunningham, Captain Murrell responded by saying “Yes I believe the evidence you have shown me, but is it ok if you attend a medical assessment to make sure you are ok?”.

Taught not to say no to his Commanding Officer, Guardsman Cunningham agreed, and was subsequently committed to the St. George's Hospital in Stafford, with a diagnosis of having suffered an “acute psychotic episode” and is expected to remain there for the next 6 months.

A Prisoner of Conscience.

Deemed by his superior officer to be unable to tell the difference between reality and imagination, Guardsman Cunningham is the latest victim of the British Crown, who classifies any criticism of any political or royal figure as having a mental disorder. 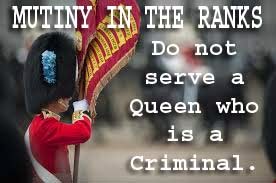 As a Foot Guards Regiment the Irish Guards Regiment is involved in public and ceremonial duties at Buckingham Place, Windsor Castle, St James's Palace and The Tower of London, and this example of a soldier questioning his obligation to serve a criminal organization headed by the Queen of England, demonstrates the seriousness of the situation.

As The International Tribunal into Crimes of Church and State (ITCCS) urgently appeal on their press release dated 7 May 2014:

The ITCCS Executive states categorically that Guardsman Vivian Cunningham has been targeted by the British Crown for his circulating of evidence of Elizabeth Windsor's guilt under the law. Cunningham's persecution is directly related to the present Common Law Court's investigation of the British Crown and members of the "royal family" for child trafficking and murder.


The ITCCS Executive therefore calls upon all of its global affiliates and British members to protest at St. George's hospital in Stafford, and phone the facility and Capt. Murrell to demand an explanation for Cunningham's incarceration. Protests and occupations will commence at British embassies and businesses around the world, and will continue until Vivian Cunningham is released unconditionally.

Guardsman Cunningham is presently being detained without his consent for six months at the mental care unit of St. George's Hospital in Stafford (ph: 44 01785 25788). He has been injected with olanzapine, an atypical anti-psychotic drug, under the orders of a Captain Murrell (ph: 44 07909686198) and Doctors Khan and Sema.

See the evidence of Genocide in Canada and other crimes at www.hiddennolonger.com and at the website of The International Tribunal into Crimes of Church and State at www.itccs.org, and at www.iclcj.com, the site for the Common Law court network.

An International, multi-lingual ITCCS site can be found at: http://kevinannettinternational.blogspot.fr/

https://www.youtube.com/watch?v=CReISnQDbBE - Irene Favel, Eyewitness to the incineration of a newborn baby by a priest at Muscowegan Catholic Indian school, Saskatchewan, 1944

https://www.youtube.com/watch?v=RBUd3UXt6fI - Other key testimonies from our Court case against genocide in Canada.

Kevin Annett is a Nominee for the Nobel Peace Prize (2013). His personal website is www.KevinAnnett.com .

Posted by Guerrilla Democracy News at 02:45