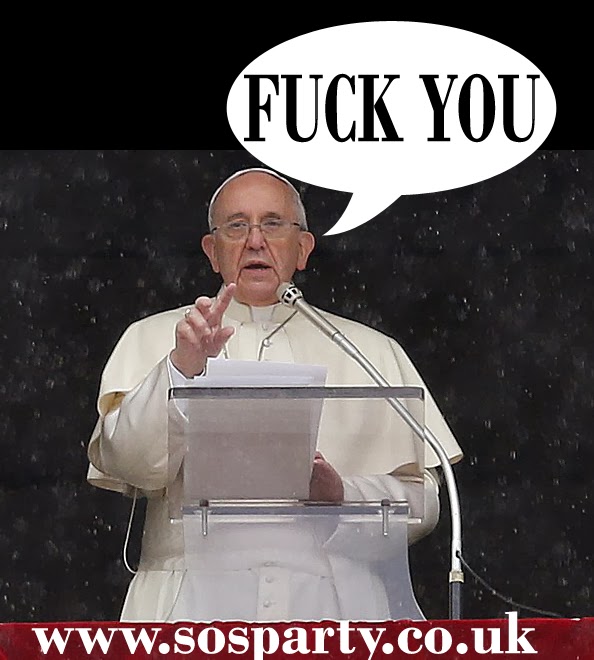 News Item: The BBC World News reported today that Jorge Bergoglio (“aka “Pope Francis”) compared the rape of children by catholic priests to the performing of a “satanic mass”
Brussels:
After being publicly accused and indicted for participating in child trafficking and murder involving apparent satanic rituals, Jorge Bergoglio today indicated that he has a “tacit knowledge” of such satanic practices in his church by associating them with the rape of children by catholic priests, according to the Court now prosecuting him.
The Citizen Prosecutor of the International Common Law Court of Justice said today from Brussels,
“Our position is that Jorge Bergoglio’s bizarre remarks are not coincidental, but reveal that he understands that the rape of children within his church are linked to satanic rituals in which he himself participates. We consider the Pope’s remarks a tacit admission of guilt and more evidence of his involvement in this monstrous crime.”
Ruth Leopold, a 51 year old American survivor of Catholic ritual torture and rape who heads a survivors’ delegation to the Court, said today in a statement to other members of her network Against Church Terror,
“Any idiot knows that even mentioning trigger words like ‘satanic mass’ will re-traumatize victims of satanic torture. So we consider the Pope’s remarks the lowest kind of sadistic insensitivity. Maybe his words were deliberately designed to make more of us kill ourselves, now that we are accusing him of taking part in Ninth Circle ritual killings. It’s time he stepped down.”
The Common Law Court of Justice is in the midst of its third closed session in which numerous eyewitnesses and archival documentation clearly link Pope Francis, Archbishop of Canterbury Justin Welby and Jesuit head Adolfo Pachon to the ritual rape and killing of children as recently as 2010. Pachon announced his resignation this past week, and the Pope has also mentioned that he is considering “early retirement”.
Bergoglio’s remarks about satanic practices have been included in the Prosecutor’s case against him, along with new evidence from Vatican sources detailing the Pope’s recent efforts to cover up Ninth Circle activities and disrupt the Court through covert means. This evidence will be described in upcoming Public Information Bulletins from the Prosecutor’s Office.
Issued by ITCCS Central and the Court’s Directorate
27 May, 2014
Brussels
Posted by Guerrilla Democracy News at 03:47