For whom the smells troll by Christopher Spivey.

Fuck me, isn’t it amazing how those quick to pounce are people who very rarely comment on my site, or have never commented at all?
Indeed, if they were anymore transparent they would be see through.
I am of course talking about the Rigby hoax and the gatekeepers for the elite.
So I will now waste my time putting these clever cunts right.
And those wide awake cunts on the David Icke forum too… Sorry worms, before you go getting all excited I should tell you that I don’t follow your forum – things get brought to my attention.
Mind you, if you want a laugh, I can recommend the DI forum.
Indeed, I would like to think that David is oblivious to the halfwits he has on there, but that would be pie in the sky since I know who runs my forum and what goes on in there despite very rarely having time to visit.
Therefore, I would imagine the same applies to David… Perhaps he just stopped caring.
Anyway, in case you don’t know what has been pounced upon, it is the fake wedding photos that I put on yesterday along with the copyright anomaly.
You know the wedding photos I’m on about?
The ones with two different grooms – One in a hat, the other a prat.

I will just pause to let you know that the article in question can be accessed by clicking HERE
Sorry, my bad, I have also just noticed that the article was written after the two Michaels were convicted in December, not sentenced in February…  My memory is getting worse… Lucky then that it makes no difference.
I mean, I can only take so many new commenters in one day… And I hate to excite the wide awake club… Even though another day has passed where I haven’t felt the need to appear alongside Peter Tatchell on

TPV… Thats the one.
I knew I would remember if I tried hard enough… Anyone know how thats going now?
Just wonderin’? … Now people have stopped financing it.
Course, I suppose that simple explanation on the copyright anomaly would explain why a wedding photographer from Nuneaton took the following photo

Although why another Lee Rigby to the 4 we have already had would be in a photo of the Northumberland Fusiliers, yet be been based in London is beyond me.
Never the less, the following photograph of Aimee and another Lee Rigby (as in a different Rigby to the one in the piggyback photo and the Rigby in the Northumberland Fusiliers photo) that appeared in the aforementioned Chimp article is obviously also an amateur photo, taken by a mobile phone or something.

See? Very poor quality, some would even say grainy… I reckon Les got ripped off myself.
Course, the Lee Rigby in this photo does indeed look to be the Karl Lee Whittle Rigby.
Gets awfully confusing doesn’t it? 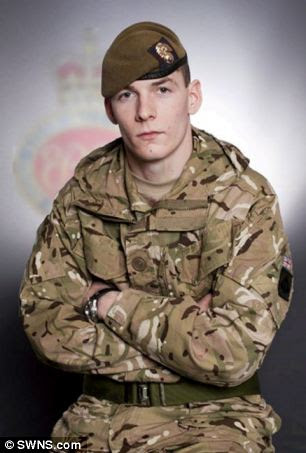 I see SWNS own the Copyright to Karls photo… But I have used it and paid fuck all to do so.
Never the less, Karl is dead. And so is Rigby… Some of them.
Course, if Sarjeant was playing Rigby on New Years Eve 2012 and Rigby (one of him anyway) didn’t die until the 22nd of May 2013 – why the fuck didn’t he play himself on New Years Eve 2012.
I suppose he just mustn’t like fancy dress.
Never the less, Les Wilson couldn’t possibly have taken those two photos of ‘Siggers’ posing with Aimee because realistically – unless Wilson is a stalker – the photos would have had to be taken when he took the photos of Aimee for the article in December 2013.
Which would mean that he was photographing Aimee posing with a corpse – whose head should be hanging off.
Moreover, if  Wilson had taken the photos, they would have been really professional looking pictures, taken on a top notch camera and massive in size.
Indeed, I would imagine that the poor quality photo which appeared in the Chimps Aimee article would have looked something like this if Les Wilson had taken it.

I mean, you can see that this one is a professional job… It is in fact actually 2048 megawhatsits in size and you can still just keep zooming in on it without it pixelating or fuck all… How marvellous is that?
In fact, try it for yourselves, go on… Just click on it and zoom.
And then click on Les Wilsons crap one… The one that he presumably bought from Aimee’s mate in order to copyright it.
I then suppose that having laid out cash for a family type snapshot alongside having taken the new photos of Aimee for the article, Les Wilson insisted that the Monkey Boys use his newly purchased crappy version of the photo because he owns the copyright to it… How naive was I?

Mind you, fuck knows why Aimee is pretending to be an RMP.
I mean, I know that she is pretending because all RMP’s are automatically given the rank of Corporal so as they have jurisdiction over Privates… And anyway, Aimee is a Sergeant in the Army Cadets… And Lee was a Cadet instructor not a fusilier.
Here is Lee with his fellow cadets.

FUCK ME ANOTHER ULTRA PROFESSIONAL PHOTOGRAPH!
Go on then, fill ya boots and have a zoom.
Course, before anyone begs to differ, I should tell you now that I back up every word I say about these 4 fine fellas – Gary, Lee, Dean and Tony.
And where do I back my words with hard evidence?
“IN LOOK BACK IN ANGER”
Exactly.
Imagine that though?
A national hero who was a private in the cadets and didn’t know how to wear his beret correctly… It is about time we had a plaque made for Woolwich in order to honour him for his act of heroism, if you ask me.
Not that I have found out what that act of heroism is yet, you understand.
But anyway, that is the copyright mystery solved… Any cunt can just use any other cunts photographs whenever they like regardless of whose name is on the copyright even when they are wedding photos.
However, I should just point out to all of you people about to get married: Make sure that you get along with your photographer or else he won’t let you use them… Probably.
And of course, the wedding photo anomaly that I brought up has also been explained away for me.
Oh yes, it turns out that the wedding photos are not photoshopped at all… How fucking silly do I feel.
You know the wedding photos that I am talking about?  The big military affair where you never see a guest in the photos.
That sentence will no doubt have the men in G-strings reaching for their top notch cameras.
Never the less, I best remind you of the photo that I’m on about.

Now, yesterday I stated somewhat incorrectly that the tall Grave to the left is in the wrong place.
And its not… Someone put the building across the road in the wrong place.
And you can see the wedding car in this photo.
Course, the thing is with these infrequent to never before commenters and clever cunts over on Ickes forum (and such other places where the government shills dwell), is that they will point out the mistakes whilst remaining schtum on the other anomalies… Such as the fucking building having been deliberately photographed to look like a church, that is never the less in the wrong fucking place.
How do you shift a whole fucking building a minimum of 6 ft to the left without photoshopping?
I mean, they will mention that the building isn’t the church, having taken the time and effort to go on google maps and investigate… Strangely enough you can’t do the same on Bing maps – unless that just applies to me of course.
Which wouldn’t surprise me because I’m banned from lots of places.
But these clever cunts won’t tell you what that strange grave like cross thing is next to Becci’s arm.
It certainly isn’t this thing mounted on concrete.

But then again, they wouldn’t point such things out would they?
I mean, these cunts are only interested in discrediting my work, not pointing out that the WEDDING PHOTOS, WITH TWO DIFFERENT BRIDEGROOMS AND A BRIDE THAT NEVER MARRIED THE CUNTS ANYWAY ARE STILL PHOTOSHOPPED.
And when you look at this photo (which was with the ones that these helpful sorts were kindly pointing out that I was wrong about), they made sure that they didn’t mention one or two things that still go to show that the photos were photoshopped.

Like the fact that the photographer took one hell of a panoramic photo  to say that he was stood way back inside the church to take it… After all, this is the same photo as the one above where the couple are cropped at the waist, and which shows even more background than this one cropped at the sides.
Never the less, that ramp is a bit fucking dangerous what with the way that it juts up a good inch or so.
Its a fucking good job that old people don’t go to church, else they would need a ramp to get on the ramp… Funny how it is a different ramp to the ramp on the actual church though.

But lets pretend that you didn’t notice that.
After all, the point is to discredit – not contribute.
Which will be why, despite this photo being the same photo as the one with the couple cropped at the waist, no one bothered to point out that the path is different at Lee Rigby’s (or at least this Lee Rigby) arm.

Or maybe it is just the way that the photos cropped… Then again, whichever one of those that it might be…

It is still fucking wrong.
Indeed it is in fact quite obvious that the path is nice and straight with an edging kerb either side.
So really, the archway set on brick piers should be seen evenly on either side of Lee and Bex in the photos.

But since it isn’t – in fact you can hardly see it – then the photographer must have taken the photo from a point off centre to the couple.
Which is a strange thing to do for a wedding photographer.

But its Michael Adebolajo… Although that isn’t his real name, in the same way that Robert Sarjeant isn’t called Lee Rigby.
Course it is a typical troll trick to seize on something that they can use to discredit the work whilst  ignore the rest that they haven’t got an answer for.
So fuck you ya fucking idiots… Because I have another 100,000 words and untold photos for you to try pick holes in yet.
Like how the fuck Adebowale grew his thumb back for instance.

Mind you, I bet ya can’t make a decent job of discrediting that either.
Just batin’.
See ya, wouldn’t like to be ya, byyyeeeeeeeeeeeeeeeeee.

Posted by Guerrilla Democracy News at 01:58