CATHY ASHDON: THEY FEAR US AT ABEL DANGER.


Abel Danger, a collection of investigative citizens working together to dig up the slime and grime on the rich and powerful, have accused EU Foreign Minister, Baroness Cathy Ashdon of being a political puppet and the ex prime ministers Gordon Brown and Tony Blair as paedophiles.

To back up their libelous statements they remind us what was printed about Cathy Ashdon at the time of her surprise appointment:


“THEY ARE NO MORE THAN GARDEN GNOMES.”

Abel Danger touches on more dangerous ground when they make the revelation that the world has been taken over by a bunch of blackmailed child murdering paedophiles, who will do ANTHING rather than have certain images of them with young children exposed.

AND WHERE ARE THOSE IMAGES?

While the mainstream media paints Cathy Ashdon as a modern day heroine, having been voted "Minister of the Year" by The House Magazine and "Peer of the Year" by Channel 4 in 2005. Then only a year later in 2006 winning the "Politician of the Year" award at the annual Stonewall Awards, made to those who had a positive impact on the lives of British LGBT people.

"SHOULD WE BE SURPRISED?" ASKS ABLE DANGER.

As they remind us: 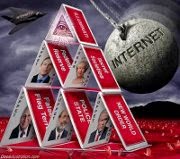 A REVOLUTION IS COMING.

“We have the photographs and we are going to publish them.”

“I happen to know Gareth broke into the database and those images are now in a safe place, and when they are finally published (and trust me they will be) you will see a revolution in this once fine Country, that you cannot imagine and we the people will take back what has been stolen from us by these despicable creatures.”

Darren Deojee reminded us during a DoomWatch conversation with Alex:G that bad people know they are bad and make no apologies, but evil people pretend they are good, that’s what makes them dangerous.

They’ll pretend that a stray bomb that destroys a village and kills its entire people is a good thing in the long run.

No, it’s an evil result from an evil intention. Let’s make no bones about it, these people are evil and the good and bad people in the world must unite to beat them.

If you would like to learn more about what Abel Danger and what are not being told, all you have to do is go to their website www.abeldanger.net; and I strongly urge you see the corruption that has been exposed by Professor George Lees on Facebook.

"They" fear us at Abel Danger and the slime and grime we are digging up. Aye!”

Posted by Guerrilla Democracy News at 06:52