Rich Planet TV has been sensationally pulled from the Showcase TV channel due to a single complaint from an unnamed viewer to Ofcom.

To an audience of 20,000 a week, Richard D Hall broadcasts his news show from his spaceship in orbit above the Earth.

’Richard D Hall presents one of the most controversial shows on television. Looking into hidden truths behind subjects which mainstream media are either too lazy or too corrupt to cover’, says its SkyBox description...

Richard D Hall responds to the Showcase statement that the show is a controversial, saying 'Its an evidence based programme which seeks to get to the truth. I argue it merely seems controversial when compared to other mainstream programmes because their news programmes, on the whole are not evidence based and are being manipulated to propagate fake or contrived narratives for a range of political purposes.'

The show that broke the camel's back was about the Woolwich hacking incident, in which Lee Rigby was alleged to have been beheaded.

Nick Kollerstrom, a regular guest on the show, said the evidence didn't’ add up and the Woolwich incident was a contrived event comparable to other state fabricated terror events such as the 7/7 London Bombing, Sandy Hook shootings, and the Boston bombing.

A thorough investigation by Chris Spivey, blows away all pretence that the Woolwich wasn't a false flag event.

In his article 'The Drummer Boy', Chris Spivey breaks the incident down frame by frame and methodically debunks every claim made by the official narrative.

As Chris Spivey admits, ’Their biggest mistake was to release the Mirror newspaper footage.’ 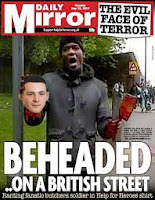 And by 'they', Chris Spivey specifically indicts David Cameron and the Conservative government, as the criminals behind this latest false flag event.

Nick Kollerstrom was simply confirming the findings of a number of independent researches who have proven, beyond a shadow of a doubt, that the Woolwich hacking incident is a false flag event.

Minutes after Richard D Hall made the announcement saying, ’This is the last Rich Planet TV show to be broadcasted on Showcase TV,’ social media was awash with stunned response.

Jim No Cash said 'This is an outrage it's the only thing true and right on the TV.'

Paul Jackson said 'Any one that recognises that the national and international media is biased and grossly abuses the system, systemically denies the public the truth and on a mass scale, belittles, humiliates and denies the truth, should fight against this travesty …'

While Edward Hinton echoes many people's feelings with simply 'Gutted.'

Ofcom also revoked the Iranian news network Press TV on the 20th January 2013, on the grounds that they had breached several broadcasting licence rules over editorial control of the channel.

Guerrilla Democracy asks how a programme watched by so many, can be pulled from National TV over one complaint, which turns out to be unfounded because other independent researches have demonstrated beyond a shadow of a doubt, that the Woolwich hacking incident was a staged event.

Many social media comments are calling this 'a clear example of censorship' and many are calling for all out rebellion against the Evil Empire.

Richard D Hall views this as ’a pot hole in the road’ and plans to continue broadcasting his shows on RichPlanet.net.

'Its a pity,' says Richard D Hall, 'because I had some interesting material lined up. An interview with a builder who discovered an ancient underground pyramid in Wales in the 1960's. Mountains of research by Wilson and Blacket and others.'

Viewers can only hope that Rich Planet TV is back on National TV by next Friday. But then again, there is David Icke’s 'The People's Voice' TV coming soon. The perfect platform for RichPlanet TV.

Here is a statement by Richard D Hall.

Posted by Guerrilla Democracy News at 03:48