Greg is drawn to his career in a fantasy world 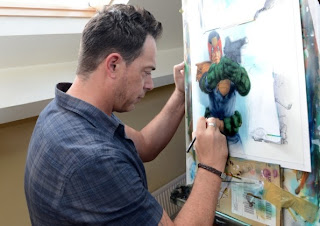 While Greg Staples was still a teenager at , he recalls a teacher telling him his cartoons were impressive but there was no money to be made from a career in illustrating.

His mum was similarly keen to discourage the hobby: she banned him from having his favourite comic, Judge Dredd, in the house, saying it was too violent. 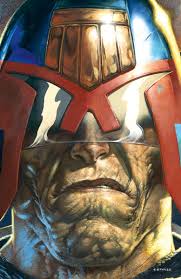 Almost 30 years on, the 43-year-old is one of the world’s most respected fantasy artists. He has drawn Batman and Spider-Man best sellers, created sci-fi music video sets for A-list bands like Muse and Scissor Sisters and was costume designer on this summer’s Brad Pitt blockbuster World War Z (“Brad was cool,” he nods). At just 19, he became the youngest ever illustrator to work on ’s biggest superhero series, 2000AD.

Now, today, in a home studio not more than a mile from his old school, he is starting perhaps his most eagerly anticipated work yet. It is, his mum might not be happy to hear, a Judge Dredd comic. He is hand-painting a special edition 60-page story written by the character’s original creator John Wagner.

“The fee for this,” he says, “has just bought me a new Mustang.”

Sometimes, it seems, teachers and parents can be wrong. 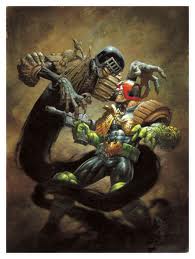 Greg, of , is a success story every bit as riveting as those comic books he illustrates.

His talents have won him awards and fans in equal measure. His body of work includes comics for American giants such as DC and Marvel, several films posters (notably for the 2012 Dredd film), illustrations for fantasy games such as World Of Warcraft and costume designs on a range of movies like 2009 thriller Solomon Kane.

His original paintings sell for thousands, while one of his works – an image of Judge Dredd fighting Judge Death – was considered so iconic by bosses at 2000AD they had it made into a statue. Fans, meanwhile, get in touch every day asking for both advice and autographs. 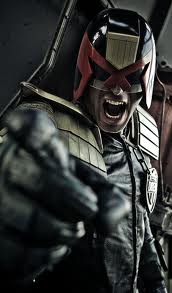 “Always boys,” he notes dryly. “You get a lot of fans as a comic book illustrator but, if you’re after girls, you’re very definitely in the wrong industry.”

It is, in short, some success for someone who admits: “Ultimately, I’ve just always like drawing muscles.”

Greg, a father-of-one, says he painted as soon as could hold a brush. His talent was prodigious even as a youngster – “I was the kid who turned up to my GCSE art exam with 10 minutes left and still got an A,” he remembers.

But after that advice from his teacher, he started training to be an architect with a Sheepbridge firm.

“It was okay,” he says. “But I remember the boss seeing my drawing board one day. It was covered round the side with all these comic book illustrations. He said: ‘You’re a talented kid but you’re in the wrong gig’. He was right.” 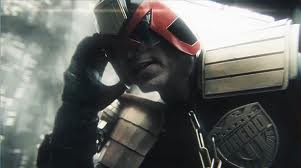 So, he worked up his portfolio and, in the summer of 1990, got a train to to attend a comic book convention where the editors of the ’s biggest titles were on hand.

“The queues to meet them were so big,” he explains. “There was no way I could get to the front. Then I saw Simon Bisley who is one of the best illustrators in the world. He was having a beer but I begged him to look at my work.

“He took one glance and said: ‘Come with me’. Then he took me to the head of the queue to meet the editor of 2000AD. They more or less gave me a job on the spot.” 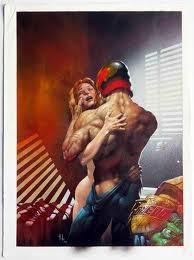 That Monday, back home in Dronfield, he was phoned with his first commission: draw a Judge Dredd story. “It was every dream I ever had come true,” he remembers.

He’s had a few more turn to reality since. 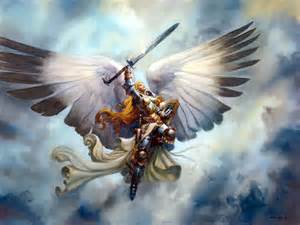 Among the work he’s most proud of is lesser- known pieces such as a character called Serra Angel (“an angel with a blue background and angel wings”) and illustrating a 1995 computer game called Loaded for Sheffield company Gremlin Interactive.

His work with the band Muse won Kerrang’s Video of the Year in 2004; while Greg himself was named world’s best artist by Fantasy Magazine.

Around the same time he set up his own visual arts business, Ark VFX, based in Broomhill, with three other Sheffielders (“I was sick of other people making money off my talent”), and then left the company to go freelance in 2006. “The other three wanted to go more into video games where I still preferred films and comic books,” he explains.

Since then he’s kept working and kept taking opportunities. When he was asked to work on World War Z he jumped at the chance. 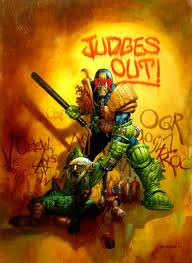 “My job was I would be given a brief for how a costume should look then I’d have to design something which looked cool,” he says. “I’d do the illustrations, walk down the corridor, pass them to the costume makers and in the morning they’d be there, made real. That was pretty cool.”

One thing he’d still like to do is a comic book of A Christmas Carol by Charles Dickens.

“I think that visually it’s amazing,” he said previously. “You’ve got this old town, you’ve got these smells, all this atmosphere, great characters and caricatures.”

But, for now, at home in Dronfield – he’s lived in London and Cambridge and worked extensively in the US but moved back to the town in 2007 – he’s determined to keep improving. 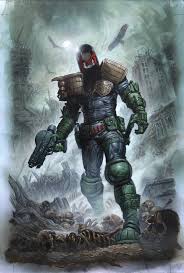 Greg Staples has lived and worked all over the and US – from to , to . But his home and his heart have always been in Dronfield, he says.

The 43-year-old – who has drawn such cityscapes as Superman’s Metropolis and Batman’s Gotham City – left the Derbyshire town in his 20s but came home six years ago. He lives in .

“Why?” he muses. “I love the place. I love the people. I love the community feeling. I love the pubs. I’m settled. I like being on the doorstep of and the Peak District. The colours you get there are something else. As an artist, it’s inspiring.” 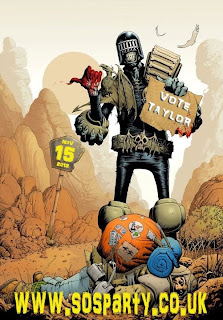 Greg Staples has met plenty of A-list celebrities – but he says he always has to play it cool.

“A lot of the time I’m working with these guys so it’s not professional to get star struck,” he says.

“You can’t take instructions from Brad Pitt and then ask him for a picture. That’s one way of guaranteeing you don’t get work again.”

Yet he says it’s still a big thrill when big stars appreciate his work.

“Brad was cool,” he says. “We didn’t hang out but he was the producer on World War Z so we had to talk quite a bit. I think he appreciated what we’d done with the costumes.”


To read the original article by Colin Drury and published in the Daily Star, click on the link below:
http://www.thestar.co.uk/what-s-on/greg-is-drawn-to-his-career-in-a-fantasy-world-1-5987487

Posted by Guerrilla Democracy News at 11:03