Have you heard about the 3 soldiers who died after running too much?
Yeah, they were SAS, best of the best. Three elite candidates to the most elite unit in the British military arsenal.
They died, overcome by heat, on the hottest day of the year....
Bullshit.
Read the story from the Daily Mail and which I’ve included at the bottom of the page if you haven’t done so already.
Its complete bullshit, but worth it to understand the ways of the Evil Empire.
The secret to what really happened on the Brecon Beacon SAS training exercise was more a case of an outbreak of an infectious disease, killing three soldiers, two on contact and one, two weeks later.
The fact that witnesses testify that they saw two soldiers ‘clearly in distress’ who pleaded with them for ‘some drinking water’, blows the official narrative apart.
Soldiers carry their own water and would NEVER ask a civilian for water.
Pawns in the game of War
In memory of three heroes who lost their lives as pawns in the game of war, here are their rank and names.
Three SAS candidates, who had served in Iraqi and
This calibre of men do not die from heat exhaustion on a military training exercise.
I've been on many military exercises of this kind and you do not run up to random strangers and plead with them for a drink of water, as the newspaper reports.
The clues to what really happened are littered through-out the story.
The opening sentence reveals the secret is one swift swoop.
‘Third army reservist to die after being overcome by heat during Brecon Beacons SAS training exercise named as a corporal with the 'most infectious enthusiasm for life'’
There you go, the first quote used is ’most infectious enthusiasm for life’.
The secret is out...
‘Infectious’, they died by an infectious disease which killed two on the day and a third two weeks later.
Yes, I expect you will dig up a few cases of ‘beasted to death’. I’ve been beasted and have seen it happen to others. It's horrible and people have died, but please:
I challenge anyone to give me the statistics of soldiers dying over heat exhaustion in the last 100 years, let alone three in one day.
In itself it raises questions like, ’Why would you be in critical condition for 2 weeks for heat exhaustion? In the real world you would drink 2 litres of water and lay down for 15 minutes.
Condolences to the family.
This is what the family of Corporal James Dunsby said ‘He was the most loving and dependable husband, not to mention the most handsome of men of whom could not be more cherished.'
'James was and will remain a dearly loved, son, brother and husband. He had the uniquely wonderful ability to endear, enchant and captivate all who he met with his naughty sense of humour and highly intelligent wit.
Don’t you think that's weird language to us?
OK, admittedly he had been in critical condition for the last 2 weeks, so they may have been prepared to give such a glowing testimonial to a heroes life, calling him ’most handsome of men’ and ’whom could not be more cherished’.
It all sounds so wooden and stiff.
You wouldn’t talk about a SAS candidate as having ‘the uniquely wonderful ability to endear, enchant and captivate all who he met with his naughty sense of humour and highly intelligent wit.’
Craig Robert’s father had this to say about his son, ‘We wholeheartedly supported Craig in his military endeavours and it gives us some comfort, though great sadness, that he died in the pursuit of his dream.’
And James father said this ‘James adored the army and believed so passionately in his duty as a protector of Queen and country and of the realm.’
As if they are trying too hard to convince us the three men died happy and there is nothing to see here, and move on, move on.
My heartfelt condolences go out to all the family members of the three dead soldiers, but come one.... Don’t you realise you are helping an Evil Empire cover up their crimes.
You make me sick and you dishonour your son’s deaths.
Three extremely fit men do not die on a military training exercise, no matter how hot the weather. I simply cannot believe this is story and am amazed no one else has picked up on this.
Their inquests.
Even though every investigation and enquiry has yet to ‘ascertain why they died’, the Daily Mail propaganda machine is telling us the deaths were linked to the heat wave.
Headline and example
This is blatant criminal activity. Interfering with an official investigation, carries a 7 year jail sentence.
The editors and owners of the Daily Mail should be thrown in jail with their Evil Empire masters.
In the same article it reports three times:
But yet the Daily Mail propaganda machine go on for the fourth, fifth and sixth time to imply:
‘Heatwave death toll increases’.
Read what the Ministry of Defence said at the hearing.
‘Military’s casualty visiting unit had been working closely with all the families affected.’
WHAT? Say that again. The paper reports three extremely fit young men, die from heat exhaustion, during a heat wave on the hottest day of the heat wave, and the families are being visited by a military casualty unit?
As the artist taxi driver would say, U WOT...
‘Families effected’, oh right, you mean the families might be infected with the same deadly disease which killed their three sons, on the Breacon Beacon, which is why they are been regularly monitored by the military causality unit.
Yes, it makes sense now...

An army reservist who died after falling ill during SAS selection training in the Brecon Beacons earlier this month 'adored the army' and believed passionately in his duty, his family have said.
Corporal James Dunsby, 31, died yesterday in hospital where he had been in a serious condition after falling ill during the exercise on July 13, one of the hottest days of the year.
His death follows that of colleagues Edward John Maher and Lance Corporal Craig John Roberts, who also lost their lives after collapsing during the military exercise on south Wales' highest mountain. 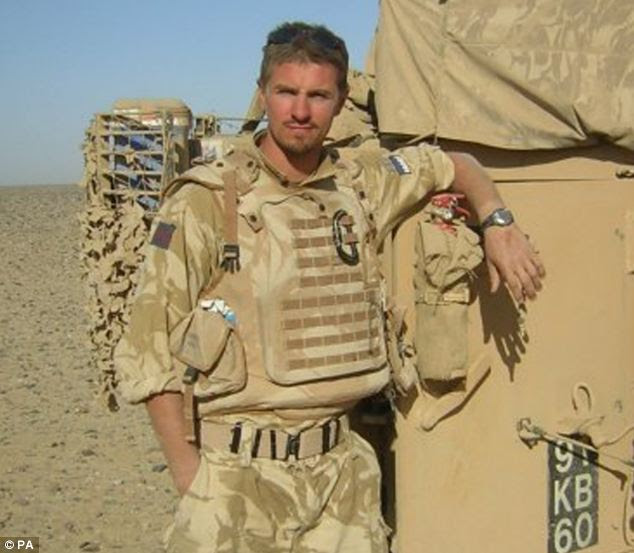 James Dunsby was today named as the third army reservist to have died during a training exercise in the Brecon Beacons
In a statement issued through the Ministry of Defence today the family of Cpl Dunsby, who was a member of the Army Reserves (The Royal Yeomanry), said the 31-year-old had the 'most infectious enthusiasm for life'.
'He was the most loving and dependable husband, not to mention the most handsome of men of whom could not be more cherished,' they said.
'James was and will remain a dearly loved, son, brother and husband. He had the uniquely wonderful ability to endear, enchant and captivate all who he met with his naughty sense of humour and highly intelligent wit.

'With James as your friend you were ensured loyalty, strength, allegiance, protection and most of all a damn good laugh.
'James adored the army and believed so passionately in his duty as a protector of Queen and country and of the realm.
'James was so dearly loved by so many and will be sorely missed. Hurrah and Huzzah for James Dunsby; a greater man you could not meet.
'We ask to be allowed to come to terms with our grief and loss of our beloved son and brother James.' 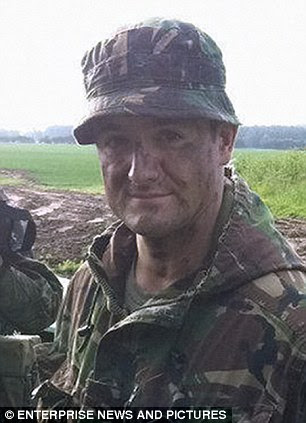 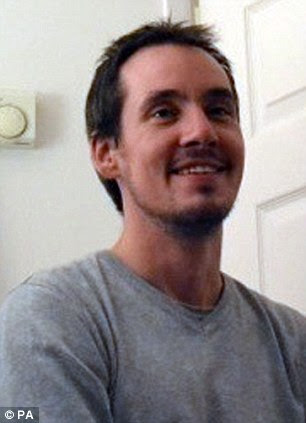 Craig Roberts and Edward Maher, who both died during a gruelling SAS endurance test in the Brecon Beacons during the heatwave. A third man who was airlifted to safety has now also died
Brave Mr Maher had served in Iraq and Afghanistan. Edward, known as Eddie to friends, served his country in Iraq and Afghanistan in an elite special reserve unit often behind enemy lines.
His comrade Will Walker took to Facebook to say Edward was a respected a liked member of his unit.
He said: 'Eddie you will be missed by all, rest easy now and we will all see you at the re-org. Edward served in 4/73 Special OP battery - an elite unit within 5 Regiment, Royal Artillery, tasked with directing artillery fire and air strikes deep into enemy territory.'
Naming Mr Maher, a Ministry of Defence spokesman said: 'Our thoughts are with his family and friends at this difficult time.
'Investigations are being carried out by Powys police and the army. We cannot comment any further until these investigations are complete.'
In a brief statement released through the MoD, Mr Maher's family said: 'At this time of great sadness, Edward’s family has asked that they be left alone to grieve in private.'
Further tests will be carried out on the two soldiers after examinations have failed to discover the cause of their deaths.
Witnesses on the day said they saw two soldiers 'clearly in distress' who pleaded with them for some drinking water. 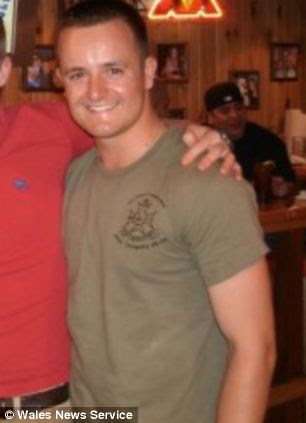 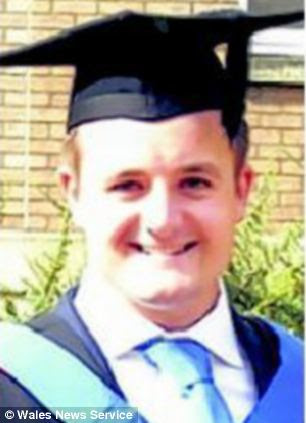 The Brecon Beacons is one of several locations used by the British military for training, and Lance Corporal Craig Roberts (pictured) was one of two reservists who died while on the training exercise
An inquest at Brecon Law Courts in Powys, mid Wales, gave the medical deaths of the pair as 'unascertained'.
Speaking at the brief hearing was Dyfed Powys Police Detective Inspector Ieuan Wyn Jones.
He said that L/Cpl Roberts had been pronounced dead on the mountain at 5.15pm, while Mr Maher died at Prince Charles Hospital in Merthyr Tydfil almost three hours later.
'Post mortems have been carried out and the causes of death are unascertained,' he added.
'Further investigations are being carried out.'
Sources have said that L/Cpl Roberts and his colleague died from heat exhaustion on July 13 as temperatures hit 29.5C (85.1F).
It is believed the group had been taking part in the aptitude training element of the course to become SAS reservists.
They had been tutored in how to survive in hostile territory and were embarking on the testing stage of the process.
The Brecon Beacons is one of several locations used by the British military for training.
Its rugged and sprawling terrain helps prepare soldiers physically and mentally for warfare, as well as putting their logistic skills to the test - making it an ideal area for elite forces personnel such as the SAS. 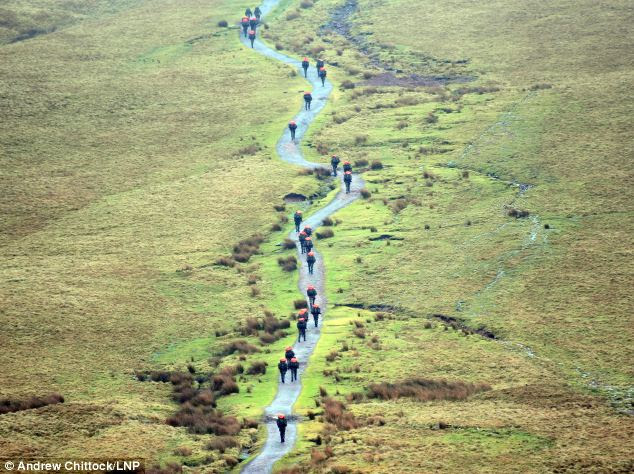 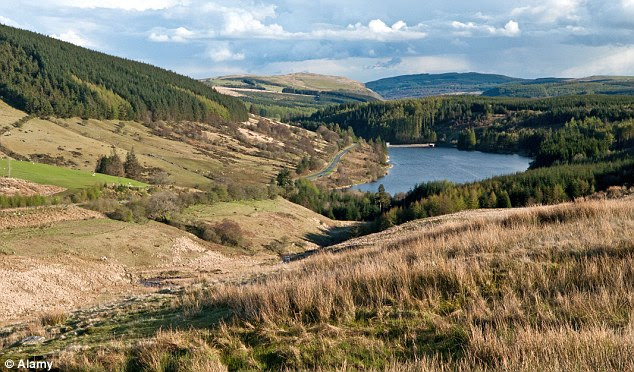 The men became ill close to Pen y Fan, which at 2,900 feet is the highest mountain in South Wales. Army chiefs say the rugged and sprawling terrain helps prepare soldiers physically and mentally for war
Last week Powys Coroner Louise Hunt said she will also launch her own probe - which she said was covered by Article 2 of the Human Rights Act.
She told the court that, under this piece of legislation, the state had 'a duty to protect an individual’s life'.
Before adjourning proceedings, she said a full inquest would examine all the circumstances leading up to the deaths and examine any 'failings... if they are identified'.
Ms Hunt also said her investigation was not a 'normal' inquest; any future verdict given must be independent and have the full involvement of both victims' families.
'I would also like to place on record my deepest condolences to both families,' she added.
Lieutenant Colonel Freddie Kemp represented the Ministry of Defence’s Defence Inquest Unit at the hearing.
He said the military’s casualty visiting unit had been working closely with all the families affected.
Proceedings were adjourned until September 3, when they will resume for a pre-inquest hearing at Aberdare Coroner’s Court.
Ms Hunt said: 'Hopefully the police and HSE will give me an update on their investigations.'