Sam the Blogger, an up-and-coming personality in the alternative media has posted a youtube video about the Chief Constable of Sussex Police, Martin Richards.

In it he brings to our attention his connection with Common Purpose.

What is Common Purpose?
According to their website www.commonpurpose.org.uk, they run courses which give people the skills, connections and inspiration to become better leaders both at work and in society.

With 80,000 trainees in 36 cities, 18,000 graduate members and enormous power, Common Purpose recruits and trains “leaders” to be loyal to the directives of Common Purpose and a largely hidden agenda which the general public are unaware of, but which opponents say lead to the European Union.

Martin Richard’s involvement is as the chairman of the National Training Managers Group, which is responsible for overseeing the national implementation of the ‘Initial Police Learning & Development Programme'.

It essentially means that all new recruits into the British Police force, must pass a Common Purpose course, which opponents say, brainwash candidates into the new world thinking of Common Purpose, using Neuro-linguistic programming (NLP).

Critics point out ‘They are learning to rule without regard to democracy, and will bring the EU police state home to every one of us. Common Purpose is the glue that enables fraud to be committed across these government departments to reward pro European local politicians.’

Brian Gerrish from the UK Column has a lot to say about Common Purpose and a video of him doing just that can be watched here.

Who is Martin Richards? 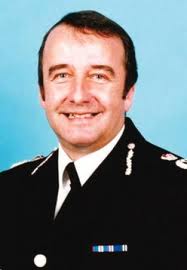 The Sussex Police page has this to say about him:

After graduating from Martin joined Warwickshire Police in 1982, and served across all geographical areas in the force. His command positions included District Commander at , Head of Communications, Performance Review Manager and a short period as Head of CID. He served for two years in National Police Training as Head of Recruit Training Centre at Ryton-on-Dunsmore.
He achieved a Masters in Criminology at before being promoted to Assistant Chief Constable at Avon and Constabulary in 1998 where his key responsibilities were Personnel and Training, Criminal Justice and Communications. He was promoted to Deputy Chief Constable in 2002, taking on responsibility for Professional Standards, Corporate Development, Communications and Information Services.
Martin was appointed Chief Constable of Wiltshire Police in September 2004. During his time in this post he oversaw 'Optimus' a 12 month programme of modernisation and reform within the force. He was also the Chief Officer lead on collaboration for all five forces within the South West region.
Martin was appointed Chief Constable of Police in October 2007 and was awarded the Queen's Police Medal in HM The Queen's Birthday Honours in 2008.
He is the Chair of the Association of Chief Police Officers (ACPO) South East Region. Martin is married to Judith and has two sons and two stepsons.

Though according to The Captain Swing Journal, ‘He’s overpaid and overdue for the chop.’

He continues, ‘He’s a man that has not done a day’s proper policing work in his whole career. He started as a graduate recruit and went straight into senior positions with Warwickshire Police , within twelve years he became CC of Wiltshire and lucky old Sussex was next in line for his common purpose improvement by destruction method of running a Police service.’

Martin Richards is investigated for Misconduct. 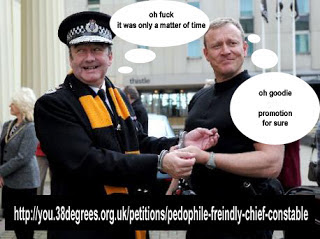 One piece of pertinent news which Sam the Blogger didn’t share is that in 2012, Martin Richards was investigated by the Independent Police Complaints Commission (IPCC) for using undue influence regarding an operational policing issue.

Unsurprisingly, he was later found to have no case to answer, after an anonymous allegation was made against him following a referral from the now defunct, Sussex Police Authority.

The 38 Degree Petition.
A petition posted on the 38 Degrees website reveals the misconduct charge to be in relation to a complaint made against the ex-Chief Executive of Arun District Council in 2002; that a pedophile ring was operating within the council offices.

The charge is that Martin Richards interfered with the investigation because he is a friend with the ex-Chief Executive of the Council.

On a personal note.
Having met Martin Richards on more than one occasion, I found him to be a polite and friendly person who made time to talk to me and entertain my thoughts and listen to my comments.

Though having said that, while I was a candidate in the Police and Crime Commissioner elections for , I publicly vowed to sack him at the first whiff of corruption. This proved prophetic because two days later on the 15 June 2012, the IPCC announced their investigation into him.

Hence I was left with no alternative but to campaign on the promise, that if I was elected, the first thing I’d do was sack him.

I’m sure he breathed a sigh of relief when it was announced Katy Bourne had won! 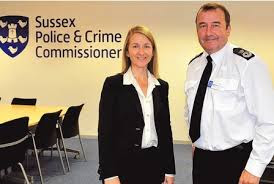 GUERRILLA DEMOCRACY CALL TO ACTION
JOIN THE REBELLION AND FIGHT THE EVIL EMPIRE
Posted by Guerrilla Democracy News at 12:04