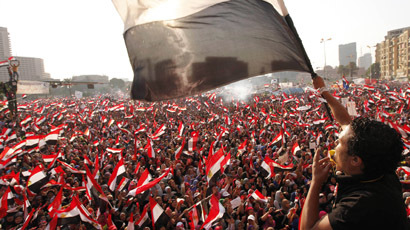 A military coup is underway in Egypt, according to Mohamed Morsi's national security adviser and a Muslim Brotherhood spokesperson. Security forces have placed a travel ban on Morsi and a number of top Brotherhood officials, according to AFP sources.

National security adviser Essam El-Haddad said that "no military coup can succeed in the face of sizeable popular force without considerable bloodshed." He added that he expects army and police violence to remove pro-Mursi demonstrators from the streets of Cairo.
A presidential aide said in a statement that Morsi is still working at the Republican Guard barracks in Cairo and it is unclear if he is free to leave. He added that Morsi's message to all Egyptians is to resist the military coup peacefully without using violence.

Morsi has offered a consensus government as a way out of the country's crisis, but offered no new compromises. The leader has refused to step down, and instructed the military not to "take sides."

The proposed coalition government would include a Prime Minister elected by political powers, according to a presidential statement. The statement added that "the scenario that some parties are trying to impose is rejected by the people."
The military ultimatum given to President Mohamed Morsi has come and gone, as hundreds of thousands of people take to the streets. Morsi previously rejected the deadline, which gave him 48 hours to meet the demands of the people before facing army intervention.
Just before the afternoon deadline imposed by the military expired, Morsi again rejected army intervention. The leader said that abiding by his electoral legitimacy was the only way to prevent violence. He criticized the military for "taking only one side."
"One mistake that cannot be accepted, and I say this as president of all Egyptians, is to take sides,"Morsi said in a  statement issued by his office. "Justice dictates that the voice of the masses from all squares should be heard."
The meeting between Commander-In-Chief of the Egyptian Armed Forces, Abdul Fatah Khalil Al-Sisi, and political forces is still ongoing, Al Arabiya reports. The most important issue being discussed is reportedly that of sending reassuring messages to the Brotherhood's leaders.
The two sides seem unwilling to budge, with protesters stating that Morsi and his Brotherhood party are pushing an Islamist agenda on Egypt.
The Tamarod movement has called on Egyptians to take to the streets and squares immediately, and to listen to the army's speech.

The Brotherhood says the army’s actions amount to a coup and says that its members are ready to become martyrs to defend the president.

"We will not allow the will of the Egyptian people to be bullied again by the military machine."

Morsi believes it would be better to die “standing like a tree,” defending the electoral legitimacy of his office, than to go down in history as having destroyed Egyptians’ hopes for democracy, presidential spokesperson Ayman Ali said, as quoted by Reuters.


Army sources had previously said the army would issue a statement after the deadline expires at about 5 p.m. (1500 GMT) but no time has yet been set for official statements, according to the Facebook page of Egyptian military spokesman Col. Ahmad Muhammad Ali.
At least 39 people have died since anti-Morsi protests began on Sunday. A night of deadly clashes in Cairo on Tuesday night claimed the lives of 23 people, most of whom died in a single incident near Cairo University.

To read the original article from RT, please click on the link below:
http://rt.com/news/egypt-ultimatum-expires-protest-616/

GUERRILLA DEMOCRACY CALL TO ACTION
If you want to see a revolution in Great Britain, jump on board and tell a friend.
Posted by Guerrilla Democracy News at 10:22