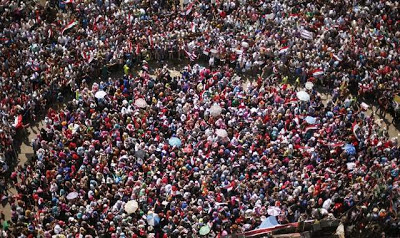 Seven people have been killed in clashes between opponents and supporters of the Islamist president Mohamed Morsi in Cairo.

Thousands of protesters gathered in Cairo as the military said it would dissolve parliament and take control if Mr Morsi failed to reach an agreement with the opposition.
However, Mr Morsi said he would not be dictated to by the army and called on the military to withdraw its ultimatum.
A message on the official Twitter feed of the Egyptian president said: "President Mohamed Morsi asserts his grasp on constitutional legitimacy and rejects any attempt to deviate from it, and calls on the armed forces to withdraw their warning and refuses to be dictated to internally or externally."
Chief-of-staff General Abdel Fattah El-Sisi has threatened that if Mr Morsi does not agree to power-sharing with his political opponents by tomorrow then the military will intervene .
Military sources gave details of the army's draft political constitution in the event it steps in which states the constitution would be suspended and parliament dissolved.
The armed forces, who took control of the country after the overthrow of Hosni Mubarak in 2011, have intensified their presence in Egypt's cities ahead of the deadline.
It comes as Mr Morsi's opponents announced they had chosen the leading dissident and Nobel Peace Laureate Mohamed ElBaradei to represent them in negotiations on the country's future.
The June 30 Front, which includes the Tamarod group which was behind Sunday's record protests, said it had entrusted Mr ElBaradei, who played a significant role in the 2011 revolution, to "ensure the execution of the Egyptian people’s demands and to draft a scenario that aims at the complete implementation of the roadmap for the political transition".
Thousands of people amassed in Tahrir Square, the birthplace of the revolution, and cities across the country as a deadline set by opposition groups for the Muslim Brotherhood's Mr Morsi to step down passed.
A giant crowd also gathered outside the Qasr el-Qobba presidential palace where Morsi has been working in recent days.
Seven people were said to have been killed amid violent clashes between Mr Morsi's supporters and opponents.
The deaths bring to 23 the number of people who have been killed since Sunday in clashes between Mr Morsi's opponents and his many backers. Some 780 people are said to have been injured.
A top Muslim Brotherhood leader urged Egyptians to stand ready to sacrifice their lives to prevent "a military coup".
Mohamed al-Beltagui said: "Seeking martyrdom to prevent this coup is what we can offer to the previous martyrs of the revolution."
He was referring to the more than 800 people killed during the 2011 revolution.
Another spokesman said: "Egyptians are very aware that there are some people that are trying to push the country back in history and back to dictatorship."
However, speaking from Cairo, Sky News' Foreign Affairs Editor Tim Marshall said that an all-out civil war was "a stretch away" and that the country had a "different dynamic" from Syria.
The US put pressure on Mr Morsi to listen to the concerns of anti government protestors. In a telephone call to Mr Morsi at the end of his African tour, President Barack Obama told him that the political crisis could only be resolved by talks with his opponents.
A White House statement said: "President Obama encouraged President Morsi to take steps to show that he is responsive to their concerns, and underscored that the current crisis can only be resolved through a political process."
Mr Morsi is also facing splits from within his government. Three government spokesmen were the latest to quit as high-level defections that underscored his increasing isolation.
The police, which are under control of the interior ministry, have stood on the sidelines of the protests, refusing even to protect the offices of the Muslim Brotherhood that have been attacked and ransacked. Their ministry has thrown its considerable weight behind the military.
Mr Morsi has met with Defence Minister and army chiefs in the second such meeting in as many days. No details were given about the meeting, however, it suggests that efforts were being made to resolve the crisis.
To read the article from the Sky News click below