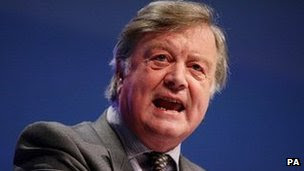 Justice Secretary Ken Clarke has told MPs that the UK is "plainly losing" the war on drugs.


He said those working to reduce addiction were "disappointed" by a lack of progress over the last 30 years.


However, government departments were working together better than ever before to fight the problem, he added.


Mr Clarke told the Commons Home Affairs Committee that he was not convinced by arguments for decriminalising drugs.


The committee is compiling a report on drugs use in the UK, focusing on the effectiveness or otherwise on the government's strategy, published in 2010.
'Going backwards'

Mr Clarke, who served as home secretary, education secretary, health secretary and chancellor in the Conservative governments of the 1980s and 1990s, said: "I've not reached a stage of that blinding insight about exactly how we're going to improve our record, is the honest truth.


"We've engaged in a war against drugs for 30 years. We're plainly losing it. We have not achieved very much progress.
"The same problems come round and round but I do not despair. We keep trying every method we can to get on top of one of the worst social problems in the country and the single biggest cause of crime."
Mr Clarke said: "What has improved is the co-ordination between departments. I was once given the thankless task of co-ordinating the government's whole approach to drugs, pulling together the work of the different departments in the late 1980s.
"It was a complete waste of time. I did not have sufficient seniority in the government to get anybody to take the faintest notice of me."
In January, the entrepreneur and campaigner Sir Richard Branson told the committee that abuse of illegal substances should be treated as a health issue, while only suppliers should be the people facing tough penalties.
But Mr Clarke said: "The government has no intention whatever of changing the criminal law on drugs."
'Learning from the past'
Asked about his personal opinions on tackling drug abuse, he added: "I have never been persuaded by the decriminalisation arguments. I've frankly conceded that policy has not been working. We are disappointed by the fact that, apart from making progress, it can be argued we are going backwards at times.
"My purely personal view is I'd be worried about losing the deterrent effect of criminalisation on youngsters who start experimenting. The really key thing is to work out what can get fewer young people to start experimenting with drugs...
"One thing that does put them off is they could get into trouble with the police if they do it. Once you tell them they won't get into trouble, I've always felt that more of them would experiment."
Following Mr Clarke's comments, a Home Office spokesman said: "Confronting the enormous harm caused by drugs is a difficult and global problem.
"As the Justice Secretary said, we need to learn from the mistakes of the past which is why all branches of government are now working together to tackle this threat at every level.
"This means challenging and supporting individuals to free themselves from drug dependency, tough punishments for dealers and better international cooperation against organised criminal gangs."

CALL FOR ACTION BY GUERRILLA DEMOCRACY
If you think Ken Clarke is a pervert and not fit for office, subscribe and tell a friend.

Posted by Guerrilla Democracy News at 02:46