THE SHIT ON THE DRESSING ROOM FLOOR

Brighton & Hove Albion football club has stunned the city, with the sacking of their football team manager, Gus Poyet.

Chairman of Brighton and Hove Albion, Tony Bloom has insisted he cannot say anything about as to why he has been sacked. Gus Poyet has three weeks to appeal against the decision.

Uruguayan born Gus Poyet joined Brighton in 2009 and was suspended by for a breach of contract, as was his assistant, Mauricio Taricco, and the first-team coach Oatway.

Speculation is rife throughout ’s football community as to why and what happened. Some are dismissing the sacking and moving on, while others believe in sinister events going on behind the scenes.

The start of Gus Poyet’s demise appears to have started over a shit in the dressing room of Crystal Palace whilst playing at the Amex Stadium for the Championships second leg pay-offs.

Gus Poyet was reported to be furious with his staff and blasted off an angry email, which has since been published on the internet.

He said ‘I am angry that someone within this club could endanger our good reputation and stoop so low.’

Behind the scenes, Gus Poyet’s reputation was further smeared with muck, following the release of Spanish mid-field star Vincte, who described him as ‘The worst person in football.’

Vincte said ‘For me he is a selfish person, very egocentric. I’ve seen things here that I have never seen in my career. If you miss a shot in training, he makes fun. For me, that is unacceptable in football.’

To make matters worse, it appears that Gus Poyet learnt about his dismissible live on TV, though and Hove Albion dismiss this as a set-up.

He said 'Its been really sad because they gave me so much and made me feel so proud.'

The intense rivalry between Brighton and football clubs can be linked back to Tottenham FC team-mates Terry Venables and Alan Mullery.

In June 1976, appointed Terry Venables as manager. The following month and Hove Albion followed suit by naming Alan Mullery as their new manager.

The pair were already fierce rivals on and off the pitch, following a hotly contested race to become team captain.

Alan Mullery remembers, ‘I think it was probably because I got the Tottenham captaincy before him.’

The 1977 season brought both clubs together five times. Even though both teams were to go on and win promotion out of the third and into the second division. Tensions came to a head over the retaking of a penalty given to Brighton, during the FA Cup second replay at on 6 December.

’s Barry Silkman fouled Chris Cattlin in the area and were awarded a penalty, which Brain Horton converted. The referee, however made him retake the kick because of encroachment.

This time the goalie, Paul Hammond, saved it and the gamed ended 1-0 to Crystal Palace.

As Alan Mullery marched of the pitch, a flask of boiling hot coffee was tipped over him by a supporter.

Mullery pulled a handful of small change out of his pocket and threw it to the floor shouting ‘That’s all you’re worth Crystal Palace’, after which he gestured to the Crystal Palace fans with one-finger.

He was subsequently led away by Police and fined £100 by the FA for bringing the game into disrepute.

It was this evening that Brighton and became bitter enemies. 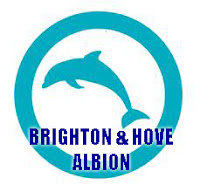 In fact, if Crystal Palace FC never existed, Brighton & Hove Albion would be nicknamed the 'Dolphins'.

This priceless historical fact has all but been forgotten. Brighton has to thank for being called the Seagulls

Not too far back during the 1974/75 season, supporters revved up their chanting with ‘Eagles, Eagles’, to which a group of Brighton & Hove Albion fans responded with a chant of ‘Seagulls, Seagulls’.

It stuck ever since.