The heart of the Roman Catholic Church has been rocked all the way to Saint Peter’s tomb, with shocking revelations made by a whistle-blowing former priest.

It involves a homosexual prostitution ring, with young teenage males and roughly ten to twenty Roman Clergy including four Bishops.

The whistle-blowing former priest; who, as a recruiter to the boy prostitution ring, also claims to have stolen consecrated hosts from inside the inner sanctum of the Roman Catholic Church and sold them to Satanists, in and around Rome to be used in their satanic rituals.

Imagine Saint Peter’s skull being used in a satanic ritual, or God forbid, the Turin Shroud covering a Satanic altar, while a splinter from the cross Jesus was crucified on, is used to kill sacrificial babies.

NO HIDING FROM THE TRUTH

Testimony provided to police and prosecutors include video and pictures, which add proof to his claims.

The whistle-blowing former priest; who was convicted of sexual abuse and jailed for 5 years in an Italian prison, came to the Vatican and tried to get reinstated, but was refused.

Infuriated he’s since blown the whistle on the whole sex ring; he's taken pictures, video and, together with collaborating evidence, handed it all over to Italian police and prosecutors.

An emergency meeting of all the Cardinals has been called by Pope Francis, to prepare themselves for impending arrests.

This disturbing news coming from , explains the sudden resignation of Pope Benedict, who is currently living in a monastery inside limits.

Sources close to Guerrilla Democracy say ‘The breaking scandal has been in the pipe-line for months and Pope Benedict has known about it since the very start.

‘This is why he resigned. He's at the centre of the scandal and, like the rat he is, jumped ship, knowing full well the scandal is big enough to bring down the whole Christian faith.’

Breaking 600 years of taboo, Pope Benedict retired to guarantee protection from these impending indictments which Italian police are planning.

The most recent news from the is that Pope Benedict is in very poor physical condition and may not have long to live. Friends close to Pope Benedict say he’s ‘fading fast’.

The stress must be immense. Privy to such dark secrets, and lying to the faithful, must take its toil on anyone, let alone an old man.

Let God be his judge… 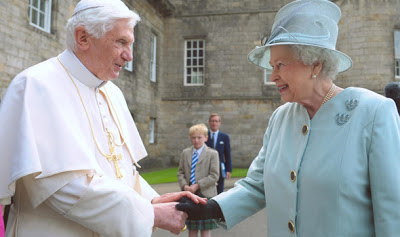 Posted by Guerrilla Democracy News at 09:25