The UK’s Truth Movement is reeling from the news that top Satanic Ritual Abuse (SRA) expert Wilfred Wong (55), has been arrested and remanded in custody, for kidnapping an 8-year-old child at knife-point.

The unnamed 8-year-old was returned “safe and unharmed,” hours after the alleged kidnapping.

All six appeared at Llandudno Magistrates Court (10 Nov 2020) and were remanded in custody ahead of a hearing on December 7.

Believed to be part of an SRA rescue team, the other defendants are reported to be Jane Claire Going-Hill, 59, Robert Frith, 65, a former psychiatric nurse, Anke Hill, 50, Edward Stevenson, 68 and Janet Stevenson, 66, a charity counsellor.

Leading the investigation, Detective Chief Superintendent Gareth Evans said: "This has been a frightening incident for those involved.”

"Our focus throughout has been to recover the child safe and well.”

"I am happy to report that this was achieved and I would like to thank our colleagues in Northamptonshire for their swift assistance.”

With speculation going into over-drive, commentators are divided as to the real story behind the headlines. The current scenarios include:

While it would be foolish and irresponsible to commit contempt of court by speculating on the reasons why Wong and his team allegedly kidnapped the 8-year-old child, an ‘# I Stand with Wilfred Wong’ campaign has already been started on Facebook, by SRA survivor Jeanette Archer, who posted:

We need to fight for Wilfred. His commitment to fighting against SRA is like no other I’ve ever seen.” 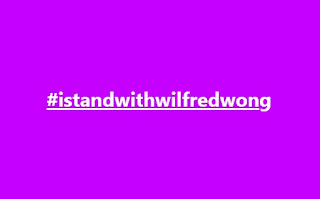 Another supporter of Wong, Paul Rouke, sums up in a pray the general sentiment of feeling, which Wong holds within the UK’s Truth Movement.

A prayer for Wilfred Wong

I STAND WITH WILFRED WONG.

A good man, a Christian activist who stands against paedophiles and SRA rings… A true man interested in real "child protection" instead police have returned an 8-year-old child to a satanist nonce, and put Wilfred in prison! The UK is sunk and resides in a swamp of vile depravity at the cost of childhood innocence.

Criticism against Wong includes comments that he is a “creep,” “dangerous,” and that he “deserves to be behind bars.”

The Trial is eagerly awaited.

Posted by Guerrilla Democracy News at 07:03