Controversial far-right politician, Tommy Robinson, has been arrested at Speaker's Corner in Hyde Park, London today, for allegedly carrying an offensive weapon.
Watch from 2 hrs 36 minutes to see Tommy Robinson arrested
A constant victim of Metropolitan harassment and intimidation, this is the umpteenth time Robinson has been arrested, the last time being for assault against an Asian man who is alleged to have touched his 10 year old daughter's bottom, at a Centre Park in the South of England.
In the videos below, exclusively published by Zero News, Robinson is seen being stopped by Metropolitan police and tested for drugs. 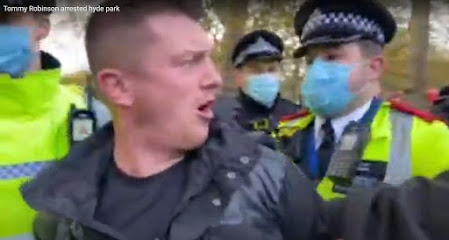 More news as soon as we hear more....
Posted by Guerrilla Democracy News at 07:56