Following the debacle at TPV TV, over Sonia Poulton's resignation and how they treated Chris Spivey, I want to get something of my chest.

Initially published by the admin at IckeExposed.co.uk – Exposing the fantasy world David Icke creates, on October 25, 2012, this sums up how I feel. 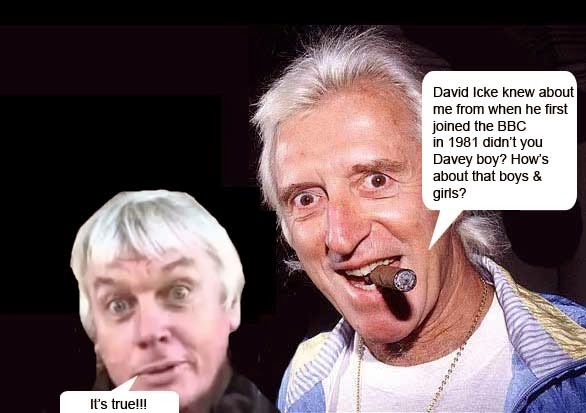 David Icke heard about Jimmy Savile being a paedophile, from the early days of his BBC career and said nothing!!!

David Icke’s been boasting recently, how clever he was for revealing that Jimmy Savile was a paedophile back in 2011, and how nobody else believed him at the time. What I want to know is this—how many years ago did David Icke, really know about Jimmy Savile sexually abusing hundreds of children while working at the BBC, before finally coming forward with his story?

David Icke joined the team of Newsnight, in 1981. Esther Rantzen had known about Jimmy Savile’s sexual exploitation and abuse of children, since the 1970′s. How likely is it that in an organisation like the BBC (which is very close knit), David Icke wouldn’t have heard the rumours about Jimmy Savile as well? Not very likely. David Icke has been aware of Jimmy Savile’s child abuse activities, just like all the other prominent BBC presenters. David Icke like the rest of them, chose to say absolutely nothing.

Now this vile, cowardly man who put his own career before the safety of hundreds of children and teenagers, has the audacity to come forward and take ‘credit’ for exposing Savile as a paedophile after his death!!!

Congratulations Mr Icke—You like all the others, have shielded a monstrous serial paedophile from prosecution to save your BBC career and in doing so, you’ve made sure this appalling man was able to carry out the satanic, ritual sexual abuse of as many children as he wanted, for years and years—you should be very proud of yourself!!!
Posted by Guerrilla Democracy News at 23:33