IS SIMON KIRBY MP FOR BRIGHTON KEMPTOWN A FREEMASON? 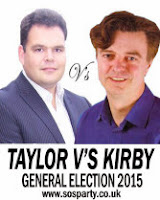 Matthew Taylor, the Prospective Member of Parliament (PMP) for Brighton Kemptown is asking the obvious question of whether Simon Kirby MP is a freemason.
Making his claim based on what Simon Kirby’s partner in crime, Shipley’s MP Philip Davies, said in the House of Commons and recorded on Hansard, on Friday 9 November 2012, while debating their Disabled Person’s Parking Badges Bill; a mention is make of how Simon Kirby managed to pass his Bill through to its third stage and eventual Royal Assent without the required Second Reading and by a ‘nod of the head.’ 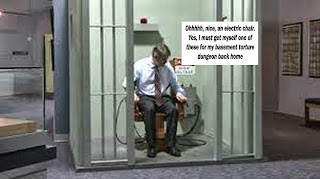 As quoted on Hansard, Philip Davies MP, pictured here exhibiting psychopathic tendencies as he checks out an electric chair in America says, “My Right Honourable member for Kemptown Brighton, is steering the Bill through with great skill, like an old hand. Indeed, if he can introduce a private Member’s Bill that finds favour with my honourable Friend the Member for Christchurch, he is doing particularly well—certainly a lot better than what many others can hope to achieve—and I congratulate him on that.”
Philip Davies makes reference to Simon Kirby’s ability to ‘steer through a Bill with great skill, like an old hand.’

Does the mention of an ‘old hand,’ point to the use of the fabled ‘old hand shake’ of Freemasonry, or is it an indication of his veteran experience as a politician? Of course its open to interpretation, which has enabled Simon Kirby to by-pass a Second Reading, with ‘a nod of the head’, and which Philip Davies points out, as “certainly a lot better than what many others can hope to achieve,” is a clear inference that Simon Kirby MP is a freemason who has enjoyed extra help from friends in high places.
With a nod of the head.
Hansard quotes on 9 Nov 2012 : Column 1129, Mr Choper MP for Christchurch saying, “The point that I was trying to make is that, although the Bill was discussed briefly in Committee, it was never debated on Second Reading because it went through on the nod.”

The Speaker of the House, John Bercow quickly smoothed over this blatant case of Parliamentary fraud by saying, “Order. The honourable Gentleman cannot take the opportunity now to initiate a Second Reading debate, the absence of which he spent some moments lamenting. He must now focus his remarks on the new clause, accompanying new clauses and amendments. I feel sure that after that brief diversion that is precisely what he is now minded to do.”
With reference of ‘an old hand’, and the ability to steer a Bill through the second reading and on the strength of a nod, demonstrates without doubt that a certain degree of skullduggery has been performed behind the scenes.
Simon Kirby MP responds.
With this irregularity pointed out by an email to Simon Kirby from Matthew Taylor on the 5 March 2013, Simon Kirby responds:
My Bill had its Second Reading on the 6 July 2012. You can see the progress of the Bill by following this link:
http://services.parliament.uk/bills/2012-13/disabledpersonsparkingbadges/stages.html
The provisions of the Bill were debated in detail at various stages of its passage through Parliament.
Upon further inspection the link reveals:
DISABLED PERSONS’ PARKING BADGES BILL
Bill read a Second time; to stand committed to a Public Bill Committee (Standing Order No. 63).
6 July 2012 : Column 1264
Which clearly shows that no ‘detailed’ debate took place, confirming the Mr Choper’s contention that the Bill has not been debated during a Second Reading.
Freemasons in Parliament. 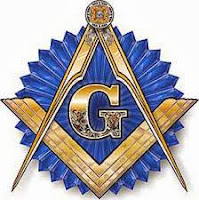 Freemasons are common in Parliament, as the Falling Masonary website reveals. Notable Freemasons, past and present are exposed to include Ed Balls, Tony Blair, Kenneth Clarke, Winston Churchill, William Hague and George Osbourne, amongst a list of many more.
Perhaps its time to add Simon Kirby and Norman Baker, the Transport Minister and friend of Simon Kirby who gave his backing for the Disabled Person’s Parking Badges Bill, to the list.
MPs told to declare links to Masons.
As revealed by the Guardian newspaper in their Sunday edition on 12 June 2005, a parliamentary motion was tabled by Liberal Democrat MP Roger Williams, that MP’s and peers should be forced to declare membership of secret societies such as the freemasons in line with police officers and judges.
The motion called on the Standards and Privileges Committee to include societies with a closed membership in its list of members interests, including freemason’s lodges.
Roger Williams claimed it wasn’t an attack on freemasonry but a call for increased openness in parliament saying, “Re-establishing the public’s trust in politicians depends upon being open about interests and affiliations”.
With five million freemasons worldwide, who pledge to give each other mutual support, it is obvious that such as secret organization would be open to corruption and misuse.
This is explored further with allegations of perversion and links to paedaphilia inside Freemasonry regularly made by the investigative journalist Chris Spivey, as illustrated in his now famous article Monster’s Inc, which can be read here.
As of today there is no requirement for any serving MP or peer to declare membership of Freemasonry.
Lets just hope Simon Kirby does the ‘right thing’ and tell his constituents the truth.
Are you a Freemason?
Posted by Guerrilla Democracy News at 23:53