COVER-UP OF A MURDER COVER-UP

The Murder House along South Coast Road in Peacehaven has been covered up to cover-up the cover-up of murder.

Self penned the Murder House by David Joe Neilson, its an eye-sore to the people of Peacehaven and an embarrassment to Sussex police and Sussex officials, since being regularly adorned with slogans and websites, encouraging passers-by to check out websites which chronicle crimes committed by Sussex Police, local officials and known criminals.

Slogans and website addresses include - SUSSEX POLICE MURDER COVER UP and, WWW.117.20M.COM.

David Joe Neilson, a thorn in the side of Sussex Police since exposing criminality by Sussex Police during the Katrina Taylor murder of 1996.

David explains that the people who killed Katrina Taylor that night, returned to the top flat of the Murder House, and it was from here that David heard pertinent information, and witnessed pertinent actions, such as the murder weapon being dropped down a gutter, which lead the police to her killers.

For 24 hours David Joe Neilson was hailed a hero. Then his world fell apart as Sussex Police commenced a sustained attack against his life and reputation. David has since suffered ill health as a direct result of the victim intimidation and dismissal of all his human rights by Sussex Police.

Having had all his rights as a victim abused by the very powers which were meant to protect him, he has since spent the next 20 years building a rock solid case against Sussex Police and dozens of local officials instrumental in the continuing criminal racket at the heart of Sussex public life.

David Joe Neilson says “If police officers are found to be up to no good, stitching up people, they don’t get away with it. If a police officer covered up evidence or whatever, he should be found guilty and he should go to prison and should serve twice the sentence of Joe Public in the street because he is there to be trusted to do the job to protect society and society being the individual not the system, not the Masons but the individual, the citizen.


Things have got to change; the Police cannot investigate themselves, otherwise the lunatics will run the asylum.”

A Fence from Nowhere.

While David Joe Neilson was away on business, a seven foot high wooden fence has been erected outside his house obscuring the message 'SUSSEX POLICE MURDER COVER UP' by being viewed by passers-by.

Against all planning permission, a 1.8m high fence has been erected directly outside the Murder House by the authorities to cover-up the allegation by David Joe Neilson that Sussex Police are covering up the murder of Katrina Taylor in 1996 in Brighton.

A murder that never was.

The Katrina Taylor murder has been solved even though nobody has been convicted of her murder. (Well according to Wikipedia it has!)

Reported by the Shadow Sussex Police and Crime Commissioner here, Katrina Taylor's murder cover-up has reached new levels of corruption with her murder being removed from the list of unsolved murders in the UK on Wikipedia.

A petition has been started by Jim Murphy from New Funk Radio into the Sussex Police handling of Katrina Taylor's murder and can be signed here.

Katy Bourne, the Sussex Police and Crime Commissioner continues to evade any questions concerning Katrina Taylor and in doing so breaks her oath. Read more here.

Labelling Katy Bourne a 'Crook', David is ready to confront her face-to-face to deliver his damning testimony against the corruption epidemic through Sussex Police.

He says “An independent Police force must be brought in to investigate police corruption inside Sussex Police. All the while Katy Bourne refuses to acknowledge me and my evidence, she is aiding and abetting the corruption which put her where she is today.”


David says, “Katy Bourne must be targeted. As the newly elected Police and Crime Commissioner for Sussex, tasked with holding the Chief Constable to account, she has done absolutely nothing to address police corruption in Sussex police and nothing to address the continuing cover-up of the Katrina Taylor murder.”

Neither Katy Bourne or Sussex Police have responded to the continuing allegations made by David Joe Neilson and the Shadow Sussex Police and Crime Commissioner, Matthew Taylor.

The Murder House isn't the only property along South Coast Road in Peacehaven to plaster their property with unsightly political slogans. Take the Conservative HQ for example. 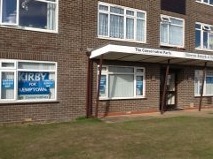