An amazing video has been released by YOU AND I FILMS, featuring the heroic actions of an anti-fracking protester at the Cuadrilla drilling site at Balcombe in West Sussex.

Nikki Sanger, who lives only eight miles away from Balcombe is afraid that the chemicals used in fracking will directly affect her water supply.

Filmed at 5.30 on the morning on Tuesday 3rd September 2013, Nikki is seen sitting on the floor wrapped in a quilt and hand-cuffed to a metal gate.

She explains to the camera, “I am a bit sick of talking about it, because people have explained for the last six weeks, why we are here and what we are doing and I study environmental science and know this is wrong, I know this is mad and I know its just about money.”

Nikki Sanger, an out-door type of person who loves adventure sports and activities says she choose to protest by handcuffing herself to the drilling site gate because “nobody is listening.”

She says, “I've signed petitions, I've written to the EIA (Environmental Investigation Agency), I've been here peacefully protesting for the last six weeks or longer. The government is just not listening to its people and science has just gone too far now. Once they start drilling and fracking, once they start putting those chemicals down into the water table, they cannot get them out.”

Nikki has been at the Balcombe protest from the very start. As an active member of the anti-fracking movement she is highly regarded as a die-hard activist willing to put her life on the line to save the environment and the world around her.

She demonstrates this passion by saying “I don't want to leave this mess for the next generation and I certainly don't want to say I didn't do anything to stop it.”

Nikki defiantly sat her ground as a hired thug moved in with heavy bolt cutters. At the moment the bolt was about to cut, Nikki defiantly thrusts her other hand out, willing to lose a finger if need be, to save our nation's water table from contamination.

Even though her protest ended after a violent and torturous struggle, in which the hired thug eventually managed to get her cuffs off, she had this to say in the safety of a car, 'Well they very roughly took the handcuffs of me which was very disappointing because I was hoping to stop the workers coming in and the trucks, to make it a bit more disruptive I suppose. A peaceful non violent protesting is what I was aiming for. It was my form of non violent direct action. I'd never do anything violent or anything to hurt somebody.'

Nikki Sanger is just one in an ever increasing line of heroes and heroines putting their lives on the line to protest against the biggest threat to our nation's environment in a life-time.

Echoing the feelings of every protester in Balcombe she finishes the video by saying 'I don't feel as if I've done anything wrong, I'm just trying to put my point across as a citizen of the world. And I really strongly believe this is wrong.'

Watch the video here, and please pass it on. 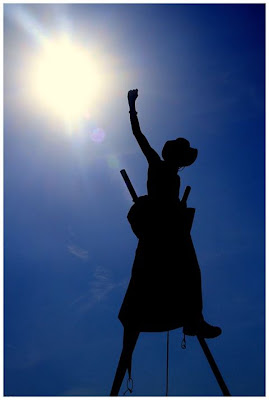 Posted by Guerrilla Democracy News at 14:08