COME ON – THE UK ELECTION WAS RIGGED! 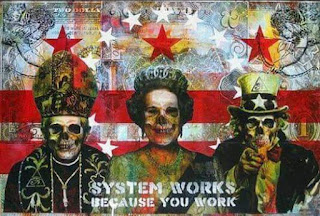 Weeks on, and with the total and utter submission of the Labour Party, with the total obedience of a compliant press and the apathy of a beleaguered public; The Nasty Conservative Party have pulled off the biggest rigged election in British political history.

As reported by Spectator Magazine-


As the Independent Parliamentary candidate for Brighton Kemptown, I was privy to the state of Tory Simon Kirby MP and prospective Labour MP Nancy Platts, while they waited for their votes to be counted.


Come on, lets get real; no-one voted for the nasty Tories and no one expected them to win.

And then by magic, they win with a majority and the Labour Party, the Press and the Public kowtow and accept their victory.

Mind you the immediate reaction by the public outside 10 Downing, proved to me that Great Britain had been robbed and that we were going to do something about it.

THERE IS STILL TIME.

While one half of Right Said Fred Fairbrass says-

“The election wasn't rigged. Labour alienated Scotland, Miliband convinced the few and sad to say Cameron seemed like the best option. I got a lot of abuse for saying it at the time but if people had abstained, undermined the process we would now be having very different conversations.”

“How can 24% of the vote mean that you're the one out of a multitude of candidates that is the winner? The election was rigged alright, maybe not in a 'fake voting' kinda way (I'm not addressing the missing hundred-odd thousand postal votes that were stolen, because I don't know much about it). But the Queen of England had promised to not turn up to give her opening of Parliament speech, did the Tories not win. That babe is how 24% = a resounding victory and that is rigging!”

Whether you want to split hairs about it or not, we know how the election was rigged.

Its easy once you know you can get away with it and that the police and press won't investigate it.

As the International Business Times reported-

OVER TO ANNIE LOGICAL...

And don't think that stealing blank ballot papers is the only way to rig an election.

Take for example the more simple method of mis-counting.

As the article tells us, in the Lewes District election count, “Councillor Sarah Osborne demanded a re-count on her poll and a good thing she did,” writes Neil Vowles from The Argus, “because a whole bundle of votes had been put on the wrong pile. After a swift redistribution, which revealed she was in fact the winner.”

"A WHOLE BUNDLE OF VOTES HAD BEEN PUT ON THE WRONG PILE."

How many times across the country were ballot papers put on the wrong pile?

'It doesn't matter who votes, it matters who counts the votes.'

Journalist Neil Vowles seems to laugh off that attempted electoral fraud right under his nose.

NANCY PLATTS WAS ROBBED – AS WAS THE WHOLE COUNTRY.

I wasn't there to know whether she called for a recount, but I expect that if she had, a whole bundle of votes would have been put on Simon Kirby's pile and after a swift redistribution, would have revealed she was in fact the winner.

(I wasn't there for the declaration because for some inexplicable reason, I became violently sick on the night/morning of 7/8 May 2015.)

I hate to call people nasty names, but if you (Fred Fairbrass included) really think the Tories won the 2015 General Election fair and square, then not only are you gravely mistaken, but you are also bloody deluded!

Posted by Guerrilla Democracy News at 03:51