DAVID BECKHAM IS A USEFUL IDIOT. 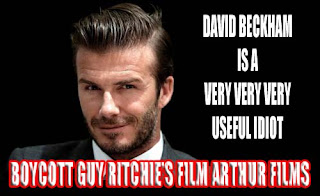 Traitor to Ancient British history and a tool of the New World Order, Guy Ritchie has enlisted the help of his good friend and football hero David Beckham to reinforce and consolidate the romantic myth of King Arthur into the minds of the British people.

With Warner Brother's stock price set to plummet in the coming months, Guy Ritchie has chosen a national hero to star in the most important scene of the King Arthur story; pulling the sword out of the stone.

Based on the 12th-century French writer Chrétien de Troyes's romantic fiction, Guy Ritchie has decided to immortalise the ridiculous notion that ancient British nobel-men choose their King on the basis of who could pull a sword out of a stone.

And to think David Beckham has allowed himself to be apart of such a ridiculous notion confirms that far from being an intelligent person with an independent mind, he in fact a very very very useful idiot. 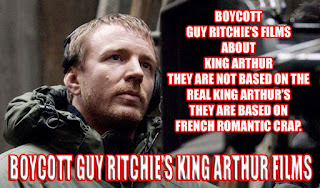 With six films planned in total, Knights of the Roundtable: King Arthur will be the first set for release in the Summer of 2016.

“There's going to be a version of the scene where Excalibur gets drawn from the stone. This is where Beckham factors in,” a source close to the production said.

The 40-year-old will be star alongside Jude Law, Charlie Hunnam and Anabelle Wallis, in what promises to be Guy Ritchie's big flop of his career.

While Guy Ritchie and Warner Brothers spend millions on consolidating ridiculous myths and untruths, the historical truth points to the likelihood that in Ancient British times, only Kings would be able to pull swords from stone, but not in the manner in which David Beckham and Guy Ritchie would have us believe.

Just like the fact that most cowboys in America's wild-west couldn't afford to carry a pistol, the same can be said about swords in ancient British times. The notion that swords were pulled from stone, originates from the fact that only Kings could afford to pay blacksmith's to make swords, often made by pouring molten metal into stone casts, hence cracking open stone to get a sword. A million miles away from literally pulling a sword from a stone, but at least you can understand where the 12th century french poet got the idea from.

As Alan Wilson states:
“It is time to tell the truth. The whole truth, and nothing but the truth. We are dealing with the biggest pack of political and religious lies in the history of the world.”

Heroes to the British people, Alan Wilson and Baram Blackett have rediscovered ancient British history which paints a very different story to the myth Guy Ritchie is peddling.

Read more: THE BIRTH OF A KING. CHRISTMAS SPECIAL EDITION.

Billionaire owner of Virgin and hero to the British people, Richard Branson is set to rival Warner Brothers with a movie based on the historical research of Alan Wilson and Baram Blackett, telling the true story of King Arthur II, untold in over 1500 years.

The foreign German royal dynasty aka The Windsor Royal family have been forced to reinforce the cover-up of ancient British history because word of Alan Wilson's and Baram Blackett's work have been reaching the ears of so many people.

Millions are set to boycott Guy Ritchie's King Arthur films because they are nothing more than propaganda pieces set to continue the longest running conspiracy in British history.

JOIN IN WITH THE BOYCOTT

Posted by Guerrilla Democracy News at 06:13