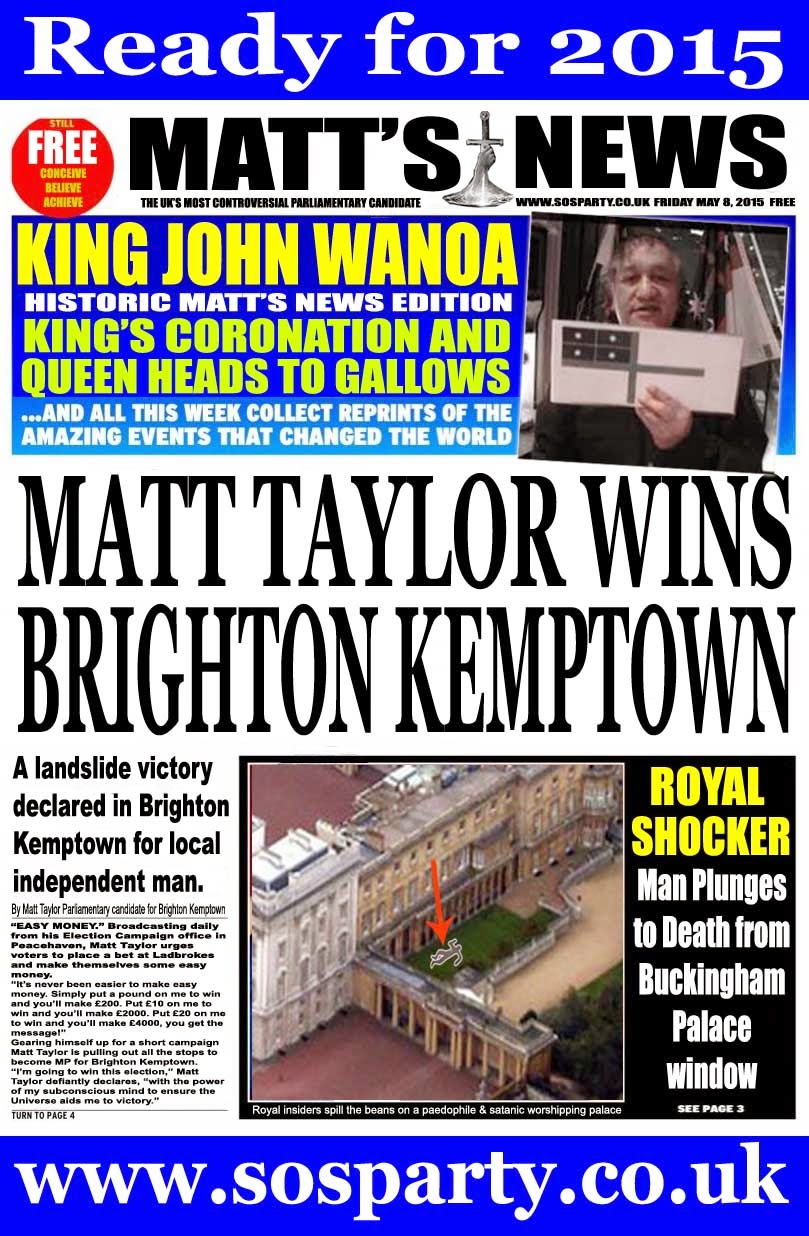 Matt Taylor the leader of the Moai King William Party has grabbed a remarkable victory in the Brighton Kemptown election, claiming “With the power of the subconscious mind, I have won the most sensational victory in political history.”

While many Labour and Conservative members are left scratching their heads this morning, it would appear the county’s voters deserted the traditional political party’s on-masse to herald ’s call to “Vote Independent on Independence Day 7th of May.”

With the biggest voter turnout in the history of elections, 100% across all three constituencies, Hove & Portslade, Brighton Pavilion and Brighton Kemptown, voters turned their backs on the establishment political parties and voted for independents instead.

Eye witnesses claim Nancy Pratts, the Labour candidate and bookies favourite to be elected Brighton Kemptown MP, ran out of the counting room at the Brighton Centre in tears having heard the news of Matt Taylor’s landslide victory, while ex- MP Simon Kirby was heard to shout various expletives when the result was read out, “You must be fucking God-damning joking,” was one of many more heard echoing around the stunned conference floor.

The result raises wider questions over whether the result is a simple one-off reflecting 's personal charisma, or instead a sign of a wider detachment from mainstream party politics to independent political thinking.

Hailing his triumph immediately after the official result was announced, Matt Taylor said: “By the power of the subconscious mind, I have won the most sensational victory in Sussex political history … Let us not forget that during these times of austerity, rebellion and uncertainly, disillusionment with politicians will inevitably increase. It’s in the spirit of that the people of Brighton Kemptown, Moulsecoomb, Rottingdean, Bevendean, Telscom, Peacehaven and Ovingdean have entrusted me with this most important of duties to ensure their MP lives up to their responsibilities and never crosses the line into complacency and corruption. Your vote was worth it. I am the best man for the job and I intent to start straight away to be the best MP Brighton Kemptown have ever had. Thank you, thank you, thank you.”

Politicians, agents and officials were privately conceding defeat long before the official result which came at 2.30am on Saturday morning.

Matt Taylor claimed the path to his victory went back to ‘Fraudulent austerity measures inflicted by a nasty Nazis regime.’

He added that both the Labour and Conservative parties hadn’t won the argument on austerity, “The truth steadily became clear to everyone. Austerity is nothing more than a nasty ideology dreamt up by the ruling elite to rob billions from the nation to line their own pockets, which would otherwise have been spent on Welfare, the NHS, the Police and Education.”

said: “A new wave of independent thinking is sweeping across the nation. A new breed of political leader have been waiting patiently in the wings, bidding our time and watching established political leaders hang themselves with their own ropes. Our time is now. We are stepping out and being counted.”

The result represents an extraordinary new chapter for personally. He was a Royal Military Policeman and later a contract weed killer, before becoming a businessman in November 2008 and building his political presence across the web, before standing in the Police and Crime Commissioner elections in 2012.

Matt Taylor has since worked diligently for as the Shadow Sussex Police and Crime Commissioner, holding the Chief Constable of Sussex Police to account; unlike the elected SPCC Katy Bourne, who has failed miserably to hold anything to account, let alone two Chief Constables (of which she is being £85,000 a year to do so.)

Posted by Guerrilla Democracy News at 05:35