THE MADNESS OF KING DAVID. 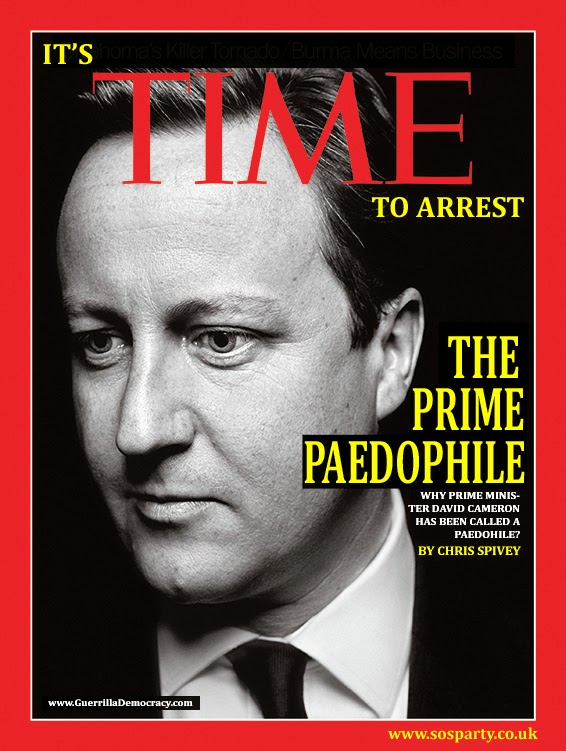 David Cameron, the ‘Prime Paedophile Protector’ of is reaching new levels of hypocrisy as his madness roars into over-drive and out of control.

Only today he’s setting out proposals that teachers, social workers and councillors who work with children could face up to five years in prison if they turn a blind eye to child abuse.

It’s great to see our illustrious PM lead by example, but if this was really the case, David Cameron himself would be the first to be arrested and jailed under his own latest proposal.

Cameron has the tenacity to say, “It is about making sure that the professionals we charge with protecting our children – the council staff, police officers and social workers – do the jobs they are paid to do.”

Without even looking at it he dismissed it with the words, “Look Phillip, I think this is really important. There is a danger if we are not careful, that this can turn into a sort of witch-hunt, particularly against people who are gay.” 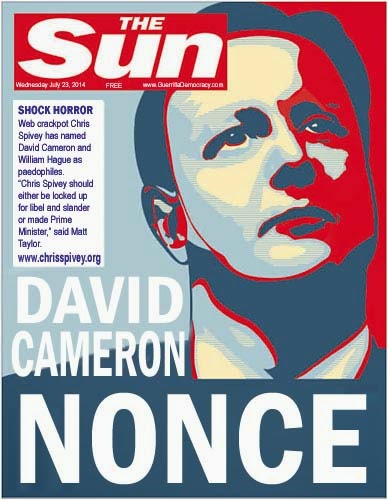 David talks the talk but doesn’t walk the walk.

“I want the Government to be absolutely on top of this, I don't want anything to be covered up. If there are more things we have to do, we will do them.”

Widely regarded as the “Prime Paedophile Protector,” David Cameron must be the first to be arrested and jailed following his latest proposals that teachers, policemen and councillors could face up to five years in prison if they turn a blind eye to child abuse.

Schofield declared there could have been 'a cover-up, a paedophile ring amongst the elite of great Britain that led all the way to Downing Street' and handed a card with names on it to the Prime Minister.

“You know the names on that piece of paper. Will you be speaking to those people?” Schofield asked.

The Prime Minister was visibly taken aback by the question and dismissed the card by placing it on the table in front of him. 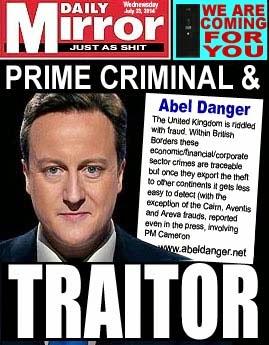 Rather than address the issue, David Cameron prefers to ‘shuffle’ the issue out of sight and mind.

While publicly the Summer Reshuffle of 2014 was billed as “a cull of the middle-aged white men,” the truth is more insidious than the Nation realises.

William Hague was sacked as Foreign Secretary with immediate effect and Kenneth Clarke was sacked as Justice Minister, spun to the public as ‘surplus to requirements.’

In his biggest reshuffle since becoming Prime Minister, David Cameron was forced to reshuffle alleged paedophiles out of his cabinet, to protect them and him-self from criminal attention from police, in light of the flawed historic child-abuse enquires in the pipe-line.

THE MADNESS OF KING DAVID RAGES OUT OF CONTROL. 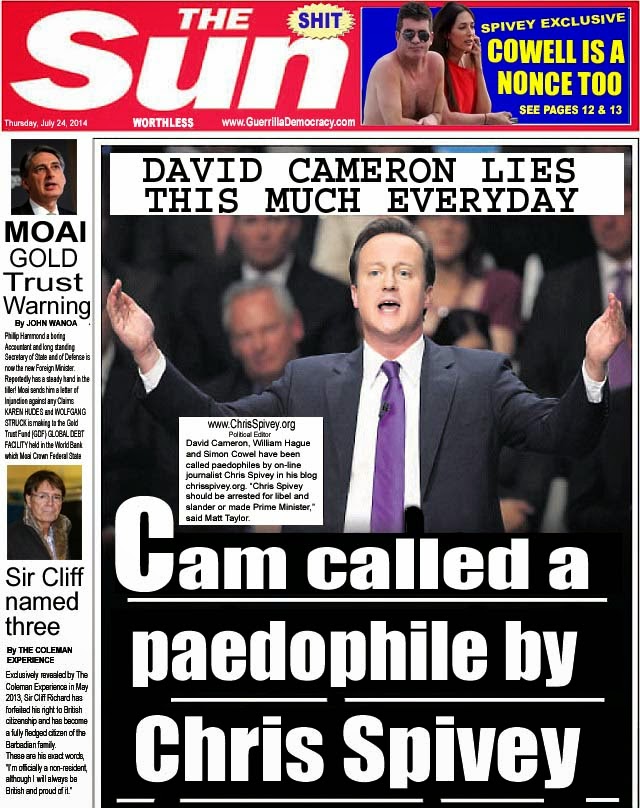 David Cameron digs his own grave deeper by promising to combat terrorists who commit appalling and heinous crimes against British citizens.

He said: “When there are people anywhere in the world who commit appalling and heinous crimes against British citizens, we will do everything we can, with the police, with security services, with all that we have at our disposal, to find these people and put them out of action. That is the number one priority for me.”

Not only the ‘Prime Paedophile Protector’ but also the ‘Prime Terrorist Protector,’ David Cameron said: “Our security services … are incredibly impressive, hard-working, dedicated, courageous and effective at protecting our country. All of the time, they are having to make incredibly difficult judgments and I think basically they make very good judgments on our behalf, and I think whilst we are in the middle of this vast effort to make sure British citizens are safe, the most important thing is to get behind them.”

Chris Spivey has conclusively proved through many articles on the subject that all the terrorist attacks on British soil over the last decade have been organised and perpetrated by elements inside MI5 and MI6.

Two out of three terror attacks on British soil under the direction David Cameron and his boss, The Queen.

Then there is the research and testimony of Gordon Bowden, George Lees and John Paterson, collectively known as Abel Danger.

Having collated evidence for the last 13 years; Abel Danger has demonstrated that The United Kingdom is riddled with fraud. 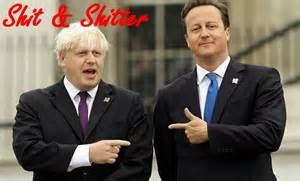 The Madness of King David escalates unbounded and unchecked. The horror of which is that the average voter and person on the street has no idea of the crimes being perpetrated by the very people they believe are working in their best interests.

Since the 1950’s big business realised that there is a ‘Dumb Streak’ in all of us. 100 customers were asked whether they would approach money leaders to borrow money. Everyone replied that they wouldn’t. The fact remained that everyone asked, were customers of Money Lenders.

Customers would turn their nose up at a bar of soap costing 7 pence but would gladly grab the special offer of two bars for 15 pence.

Big business soon found that they could sell that same 7 pence bar of soap for £2.00 if they marketed it as not just something that cleans you, but something that makes you look younger too.

This is the ‘Dumb Streak’ which was stumbled upon in the 1950’s and which has been exploited and nurtured ever since by ad men, corporations, politicians and religions.

Anything said with a straight face will be believed by the masses. Even if the statement doesn’t sit straight in their stomachs, the masses will continue to believe it because it’s being said by a person in authority.

Isn’t it any wonder that to advertise on TV costs millions? They know that whatever is advertised on TV, will fly off the shelves the next day.

We have criminals in charge of PLC and that’s a FACT. The evidence by such people as Chris Spivey and Nick Kollerstrom and organisations like Abel Danger prove it to be true.

THE TRUTH IS OUT THERE but it isn’t being believed because it’s so huge on scale and criminality.