MUTINY IN THE RANKS

BY THE BBC NEWS 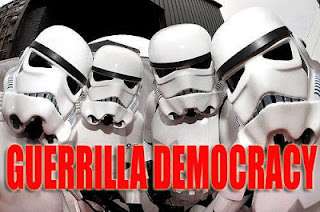 Fifteen soldiers have been jailed after a court martial for staging a "sit-in" in protest at being "led by muppets".

The men from the 1st Battalion the Yorkshire Regiment sat on the floor when ordered to stand to attention.

The protest by 16 soldiers was sparked by grievances with their captain and colour sergeant. It took place in February while on exercise in Kenya.

Fifteen were sentenced to detention, one of whom was dismissed from the Army. A 16th was also dismissed.

All the soldiers pleaded guilty to disobeying a lawful command - an offence that carries a maximum sentence of 10 years' imprisonment.

The soldiers complained of being "led by muppets, the court martial heard.

The prosecutor at the court martial said members of the platoon had been seething at the way they were being managed, and felt that they were "not appreciated".

The court heard a captain and sergeant apparently got drunk before a lengthy training march in the Brecon Beacons last winter.

The troops were said to have been furious at finding their two commanders asleep, rather than greeting the soldiers as they crossed the finish line.

Tensions came to a head at the end of a training exercise in Kenya in February, when 16 soldiers decided to protest.

Ahead of a parade, a ringleader shouted "sit down" and members of the platoon did so. The commanders ordered each man in turn to stand up, but were ignored.

Corporal Anthony Brown, said to be the ringleader, was stripped of his rank, dismissed from the Army and sentenced to 60 days' detention.

The soldiers were in the 1st Battalion at the time of the protest. However, the 1st has now become the 2nd, following Army restructuring.

John Wilson, a retired colonel and former editor of the British Army Review who lectures in military history, described the nature of the soldiers' protest as "unprecedented".

The sentences given to the troops at the court martial were "strong enough to make the point", added Col Wilson.

"I don't think a corporal, whatever his grievances, can expect to orchestrate such a public protest in front of the entire battle group parade and get away with it."

An Army spokesman said it was "not appropriate" to comment on the sentencing.
Posted by Guerrilla Democracy News at 04:47