“My job isn’t just to fight. A fight is a show. That’s entertainment. The world is a stage and we are all actors. Here I am.” - Chris Eubank

Boxer Chris Eubank talks to Gabriel Clarke about his life in sport - from growing up on the streets of Peckham to defending his world title eighteen times, taking in iconic and in one case tragic fights against Michael Watson and Nigel Benn.

With contributions from friends and family including promoter Barry Hearn, son Chris Eubank Jr and boxing correspondent Colin Hart, this programme provides a close insight into what drove Chris to be a world champion boxer, an outspoken character who was at one time said to be the most hated man in his sport. 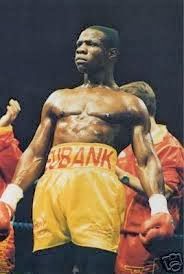 As a youngster, Chris says he idolised his mother, who left London to live in New York when he was eight, and says she provided him with the tough mindset he needed growing up. At 14, he found himself living on the streets of Peckham, sleeping rough in cars: “I was never a bad boy, I was a rude boy. My mum used to call it a ‘fly by night’ - a wannabe. A Bengal Lancer. A chancer. I was born to love, only the environment was mean-spirited and it was unkind. You have to toughen up, you have to get some teeth, and if you don’t you get moved to the side and behind.”

His father told him he needed to go and live with his mother in the tough South Bronx area of New York to get away from bad influences in the capital: “My father said, ‘You go and live with your mother, otherwise you’re going to end up in prison in this country.’ That’s the best thing that happened for me because I was able to get away from influence and started boxing and forging my way through the hazardous life of a fighter.”

He joined the Jerome Boxing Club in the Bronx, winning early prizes before turning professional. It was his relationship with his three older brothers which he says drove him to succeed: “It is what defined me, you know, I was fighting for respect. It wasn’t money I was fighting for. I wanted them to respect me.” 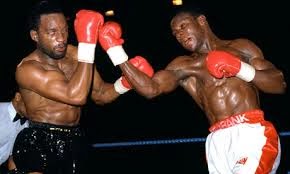 Boxing correspondent Colin Hart says the young Eubank came across as a driven individual: “I was at the Albert Hall covering a night’s boxing and this young man came up to me and said, ‘My name is Chris Eubank, when are you going to start writing about me?’ And I said, ‘Well Chris, when you’ve done something worth writing about, I will write about you.’ I didn’t realise I was going to spend 20 years not stopping writing about him.”

When he beat the world-ranked Anthony Logan, he came to the attention of boxing promoter Barry Hearn, who says: “His opening words to me were, ‘Mr Hearn I’m a fighter, I know my value.’ We clicked on day one. All I saw was ‘X’ factor, stardust, his swagger, his self-confidence. I didn’t even know if he could fight. It didn’t really seem to matter.”

Chris set his sights on fighting Nigel Benn, another rising star in boxing. When he described boxing as a ‘mug’s game’ due to the dominance of promoters and television executives he became very unpopular with fighters and fans. He says now: “I’m doing the work, taking and absorbing copious amounts of pressure and pain, so when you say, ‘Bite the hand that feeds you,’ I’m the person doing the work. Without the fighter, there is no game.”

When he got his dream fight against Benn in Birmingham in November 1990.  Chris portrayed himself as aloof and arrogant, in one television appearance refusing to face his opponent by turning away his chair. Benn admitted that he ‘hated’ Chris, which Eubank believes won him the psychological battle prior to the fight. “What won me that particular battle was that when he would have walked out of the studio, he would have felt a little bit uncomfortable with the fact that he has stated a personal feeling. Now if Nigel had won those psychological fights it would have given him the benefit of being able to persist that little bit longer, and it’s that little bit longer that makes you champion.”

Thanks to his public image - including vaulting into the ring to Tina Turner’s ‘Simply The Best’ - when it came to defending his title against Michael Watson at Earls Court in June 1991, Chris had alienated many in the sport and by his own admittance was seen as a villain: “People say I was arrogant. Nothing arrogant about standing strong and being proud. I’m a warrior. I’m not a chameleon.” 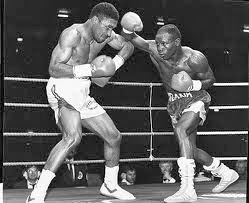 Chris won narrowly on points, though many thought Watson should have taken his title. In September that year, a rematch was organised at White Hart Lane. Eubank was behind in the fight, and was knocked to the floor by Watson in the 11th round. But when he got up, he threw a devastating uppercut, knocking Watson backwards into the ropes. Watson collapsed in his corner after the fight and spent 40 days in a coma with brain injuries, before undertaking a long road to recovery. Chris recalls: “Once my knee touched the canvas it was like I was okay. The concussion had gone. I got up, I got up and I spat and I remember the audience hovering. It was my peripheral vision and my perception. They were hovering for my demise. I went forward… And I threw a shot. You know the truth was in me. I defy any person to find five or six other fights like it in the history of boxing.”

Following the fight, Barry hearn says Chris lost his instinct to finish other boxers off and preferred to win on points. Yet the fighter wanted to carry on - as he said he needed the money. A second fight with Benn, nicknamed ‘Judgement Day’ was organised at Old Trafford for October 1993, with a massive worldwide audience. The pair fought out a draw, but Chris says Benn was much better than in their first fight: “Five hundred million people watched that fight. You could say that there was still a psychological game going on. I had him where I wanted him. That’s what I thought.”

In the meantime, Chris’s outrageous public persona was taking off, fuelled by the purchase of a massive American truck, and a magazine photoshoot in which he dressed as an English country gentleman: “Jodhpurs, it’s just fashion. The monocle, that affectation is just the icing on the cake and it’s confused, because I’m doing something which looks caucasian or old English and yes I am a person of this particular colour but that’s why it was so much fun. I am at this point trailblazing so I’m really in unknown territory. I’m really leading the way. I’m really the beacon.” 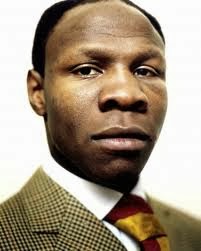 After losing to Steve Collins in 1995, Chris retired, only to return to the ring the next year before being defeated by Joe Calzaghe and Carl Thompson in his final fights. Suddenly he found the public had affection for him, and he speaks of his surprise: “This was in ‘98. In ‘91 didn’t I show this heart? But you only recognised it when I lost. Strange, but wonderful.”

Despite this, he says he is thankful for everything that boxing has given him and says he gets a great deal of happiness through recognition now: “I realise that every day, when people they hold you and shake you. That’s my honour. That’s why half a billion people watched the second fight I had with Nigel Benn. I was being a warrior. Even when they were against me, I was entertaining them.”
Posted by Guerrilla Democracy News at 01:12