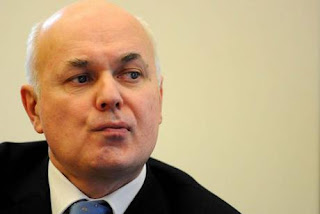 Sneaking out an admission of yet more delays to his grandiose universal credit system comes as no surprise given Iain Duncan Smith's past record.

Iain Duncan Smith conceded that he will miss his own deadline for moving all claimants to universal credit by 2017.

It has been another noisy week for the quiet man. Iain Duncan Smith decided that the chancellor's statement on the economy made Thursday a good day to bury bad news. With a shabbiness entirely in keeping with the work and pension secretary's low character, he sneaked out the admission that he would fail to hit the 2017 deadline for the introduction of his universal credit when no one was looking.

The truth that he had wasted more money than an army of benefit fraudsters on a grandiose IT system had been dragged out of him like a confession from a hardened criminal. The Department for Work and Pensions admitted to writing off £34m in September. The public accounts committee upped the losses to £140m in November. The spectacularly well-informed tech journalists on Computer Weekly were gloomier still: the taxpayer may have to lose most, if not all, of the £303m Duncan Smith had spent, they reported.

Thanks to Iain Duncan Smith- Hunger is up, Crime is up and Homelessness is up. 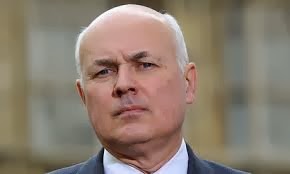 The day before the universal credit fiasco, Kent county council linked Duncan Smith's welfare "reforms" to the growing misery in the county. Thousands were dependent on food banks, its officers said. In a throwaway line that tells you all you need to know about Britain, the council added that 1,357 children had come to the banks, not so much to ask for "more" as for any food at all. Hunger was up, crime was up and homelessness was up. The only thing falling was household incomes. And this in Kent, "the garden of England" and one of the most prosperous counties in the land.

We need a new word to describe such underhand tactics – "Duncian" or "IDioSyncratic" perhaps; a neologism that acknowledges all the deceits that Duncan Smith has weaved from the moment when he claimed on his CV that he had studied at Perugia University, rather than an Italian language school, to his manipulation of statistics today. 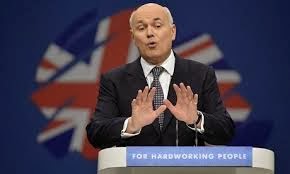 But in a week that has tested the stoicism of the most unshockable Duncan Smith watchers, it was Tuesday's news that shook me most. The authorities increased from nine to 13 the number of people facing charges over an alleged fraud on the taxpayer at A4E. The parasitic company grew at public expense, most notably with contracts to run Duncan Smith's Work Programme. The trial is pending, but we already know that A4E gave its former chairman, a Cameron crony called Emma Harrison, a £1.3m dividend after the fraud scandal broke in 2012, and that the prime minister's former families' adviser had pocketed an £8.6m dividend the year before.

I decided to check with my old friends, Duncan Smith's flak catchers at the DWP press office. I could guess the answer to my question. But we Observer journalists have a fanatical commitment to accuracy. I had to be sure.

"Are you still giving public money to A4E?" 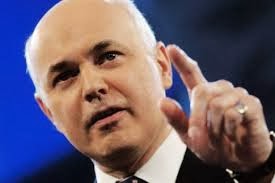 The Work Programme is a Cruel Joke.

If you think of believing the right's claims that it is cutting welfare to help the taxpayer, then think of A4E and of the hundreds of millions thrown away on the universal credit and think again. Inevitably, the Work Programme to find jobs for the unemployed is another joke, and a cruel one at that.

One of the standard tunes of the Tory party and press is that sick and disabled people, who receive the employment support allowance because they say they can't work, are liars. Duncan Smith therefore sends them to dubious medicals. The doctors declare them healthy. Duncan Smith cuts their benefits from £106 per week to between £56 and £71. He then puts them on the Work Programme. His own department's figures show that just 4% find jobs afterwards. Nothing has changed for the remaining 96%, except that Duncan Smith has pushed them deeper into poverty.

Why is this man still in a job? 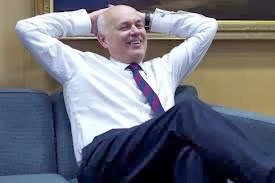 I ask not only because his incompetence and mendacity would disqualify him from any reputable firm, but because the removal of Duncan Smith from the leadership of the Conservative party is the opening chapter of the myth of David Cameron's moderation.

Duncan Smith's time in charge of the Conservative party was the catastrophe.

The modernisers say that Duncan Smith's time in charge, from 2001 to 2003, was the catastrophe that at last made the party realise that it had to return to the centre ground. The Tories' poll ratings collapsed. Duncan Smith's friends turned against him. "I can't think of a good thing to say about Iain," one prominent Tory of the time told Tim Bale, an excellent historian of the modern Conservative party. "He's not very bright. He's not very loyal either."

After his disastrous "the quiet man is here to stay and he's turning up the volume" speech to the 2003 Tory conference, Michael Gove wrote in the Times that everyone knew the Tories had to be more than a rightwing rump. Yet Duncan Smith could not control himself. He had given a "bitterly vicious" performance that would appeal to no one outside the Tory tribe.

"Listening to Mr Duncan Smith's speech," Gove continued with words he should not be allowed to forget, "some lines of Kipling came to mind: The Dog returns to his Vomit and the Sow returns to her Mire, And the burnt Fool's bandaged finger goes wabbling back to the Fire." 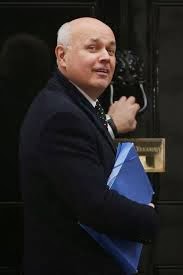 The Conservative party revolted. It threw out Duncan Smith and put Michael Howard in his place as caretaker. He promoted the young stars Cameron and George Osborne, who led the Tories back to the centre ground and back to government for the first time since 1997.

The trouble is, the Tory right never wanted to move to the centre and it has grown in power since 2010, as has the UK Independence party. Both admire Duncan Smith's "bitterly vicious" policies and would go wild if Cameron succeeded in firing him, as Osborne tried to do last year. In other words, Cameron's failure to take his party with him means that the wabbling fool is unassailable.

The Wabbling Fool is unassailable.

The children begging at food banks and the sick men and women that the coalition tells to work in jobs that do not exist deserve an answer to a hard question. The Conservative party did not consider Duncan Smith fit to be its leader in 2003, when it was in opposition and had no power. Why, then, does it give him the power to ruin their lives when it is in office in 2013?
Posted by Guerrilla Democracy News at 05:02