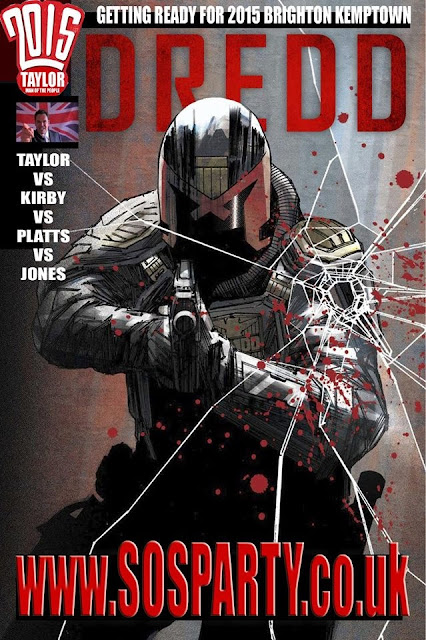 The American release of the comic book sequel to 2012's "Dredd" marks the first US-format comic release for British anthology series "2000AD," and almost certainly guareentees a sequel to the critically acclaimed response to the 2012 release of Dredd.

Rebellion is in the air.

According to 2000AD editor Matt Smith, the American release aims to capitalize on the increased awareness of the character in the U.S. following the Karl Urban movie.

Real swell of U.S. interest in Dredd off the back of the film.

"This first foray for 2000AD in producing a U.S.-format book, geared specifically to the [comic book] direct market, and aimed at satisfying those demanding a sequel, is a stumm gas grenade-style lob across the Atlantic to show that you don't have to camp outside your local multiplex to get your next fix of Mega-City One -- the Judge will carry on enforcing the Law through the pages of the comic. Arthur and Henry have created a terrific story, and a powerful follow-up to the film. Dredd fans won't be disappointed," said 2000AD editor Matt Smith.

Launched in 1977 in the U.K., 2000AD's American presence has been uneven throughout its existence. There have been multiple licensing deals to repackage and republish material for the U.S. audience, including deals with Quality Comics, DC Comics and current rights-holders, IDW Publishing. 2000AD publisher Rebellion has been releasing collected editions of material aimed at American readers since 2010, when it signed a distribution deal with Simon and Schuster, but with the exception of Free Comic Book Day magazine-format releases, has stayed away from releasing material into the comic book store direct market.

Dredd: Underbelly will be released in comic stores, as well as through the Kindle Fire, Nook and 2000AD iPad app, in January 2014.
Posted by Guerrilla Democracy News at 08:00