MATT TAYLOR PULLS OUT OF BRIGHTON KEMPTOWN 2019 GENERAL ELECTION - EVEN BEFORE IT'S BEGUN!

Found guilty of breaking Facebook's Community Standards, for sharing a video of maverick political Tommy Robinson walking and talking past the Houses of Parliament, Taylor despondently says, "all chances of waging a successful social media election campaign has been lost."

"All chances of waging a successful social media election campaign has been lost." 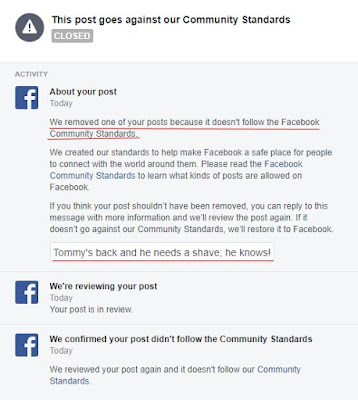 "I am the parliamentary candidate for the UK Moai King William IV Party in Brighton Kemptown and this ban prevents being from waging a political social media campaign in the General Election.
When I shared the footage of Tommy Robinson walking past the Houses of Parliament, I didn't know that it went against Community Standards.
I've read and understand the Community Standards and don't understand how posting footage of Tommy Robinson walking and talking is a violation of anything.
It was already posted on Facebook and was being freely shared. Facebook allowed it to be shared on their platform, but yet you've banned me for sharing it?
It doesn't make sense, unless you received a malicious report from the Hoaxtead Research community, who made this report, specifically to sabotage my social media election campaign.
This really isn't fair and I am the victim in this instance."

Told by The Argus chief crime reporter Emily Walker that he has "no credibility", Taylor's public exposure, in equal measure with the other Brighton Kemptown candidates, took a nose-dive, after The Argus, (under the editorial-ship of Mike Gilson) omitted him from the list of candidates in the article, 'General Election 2019: Who can I vote for in Brighton and Hove?' 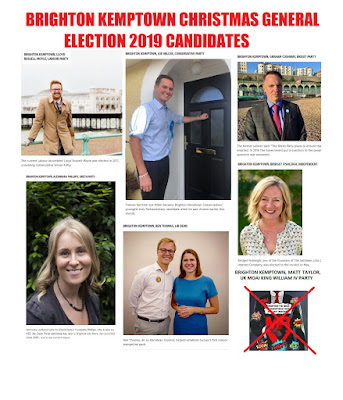 The same happened to him in 2015, again under the editorial-ship of Mike Gilson.


The Final Nail in the Coffin - The Straw that broke the camel's back - STOP THE METAPHORS PLEASE!

As this leaked email from Matt Taylor to his friend David Neilson reveals:

"I'm giving up on politics. I've had enough of banging my head against a brick wall.
I've got zero credibility mate and as such will never be taken seriously.
ha ha!"

If Matt Taylor had no credibility, why has so much been done to silence him.

⦁ I never knew politics could be so dangerous
⦁ https://guerrillademocracy.blogspot.com/2015/02/i-never-knew-politics-could-be-so.html

7 November 2019 - Omitted from the list of Brighton Kemptown parliamentary candidates in The Argus - Recalling the 2015 General Election when the editor of The Argus Mike Gilson did the same - Told by chief crime reporter Emily Walker that I've got "no credibility."

8 November 2019 - Given a 30 day Facebook ban for sharing a video of Tommy Robinson walking and talking past the Houses of Parliament, preventing me from waging a successful social media election campaign.

"I'm tired of banging my head against a brick wall..."

Basing his assumptions of past experience, heart-fallen Taylor predicts he'll be excluded from all hustings and other election related events, which the other candidates would be invited to.

Posted by Guerrilla Democracy News at 12:22