The Truth Movement is on Red Alert today after the disappearance of fraud investigator John Paterson from Sussex.


Last known to be on-route to the Ministry of Defence in London to deliver important evidence of a nation-wide organised crime network operating in the UK government, 69 year old John Paterson, was detained by Ministry of Defence police and taken to Holborn Police station, before being driven at high speed to Eastbourne Mental Health facility, where he remained over-night.

After numerous attempts to make contact with him, all requests to talk were rejected, with the excuse he had moved from Bodium Ward in Eastbourne to an undisclosed location.

With fears reaching fever pitch, and after dozens of phone calls by Paterson's supporters to the police and NHS Trust, news came in that Paterson had been located, via a Facebook post by fellow fraud investigator and friend, Neelu Berry.

"We have found John Paterson in Wandsworth Police Station."

"Midnight today John Paterson stated that he is in Wandsworth Police Station, he had been produced in Westminster magistrates' court on the 7th of November 2019, charged with harassment on Facebook, even though he has not had any Facebook account for 2 years.

On 5th of November he had attended MI6, 10 Downing Street and the Ministry of Defence using an Entry Pass and saying he had an appointment. As he waited in the reception area for his appointment to serve the documents private MOD armed police took him to Holborn police station.

At 5 a.m. On 6th Nov he was taken by siren police van to Sussex mental health secure unit on Bodiam Ward. . He phoned at 11 a.m. on the 8th of November to say he had been denied access to purchase fresh clothes for 3 days, his mobile phone had been confiscated at Holborn police station.
Hundreds of phone calls were made by his Million supporters.

Later on the 8th he was said to have been discharged.

He informed the judge in Westminster Magistrates Court that this kidnapping was to deny him his hearing on the 15th of November 2019. He believes that they will be putting him in Wandsworth prison on remand to make sure he cannot access his documents of State Corruption and Denial of Mass Remedies.

Clearly the Organised Crime Network is falling apart with the MOD not being supported by City of London Police, Metropolitan Police, Holborn Police station, Sussex police or the Mental Health Services and so now he's back 100 miles in London, being charged with harassment on Facebook which was not the original charge. The Original charge was harassment of the MOD.

He asked that Equity Lawyer Edward William Ellis be informed immediately of his situation of not being able to access his paperwork for his hearing on the 15th November."

On the other side of the coin, Paterson's detractors weren't so kind in their thoughts and best wishes.

John Green had this to say via an email to Paterson's friends:

"John Paterson has threatened to kill people, threatened to send hit men who is known only as Bill and Ben. The detention of John Paterson is the correct one, not only for treatment but for treatment for his own safety. He clearly is a disturbed individual with menacing thoughts, Andy Devine and co are feeding the same. Stop Interfering in patient treatment and look at getting treatment for yourself, Andy you are clearly disturbed and are in my opinion suffering mental health. GET CHECKED OUT DREAMER.
If you wish to receive no further emails from me please contact john.green1964@aol.co.uk with message STOP.
What is stated above is true."

A victim of a sustained attack by Hoaxtead Research trolls for many years, Paterson is a high ranked target and a regular victim of internet abuse.

Punched in the temple at the infamous court trial of Hampstead whistle-blower Sabine McNeill, Paterson has since disclosed information revealing his connection with London's underground criminal fraternity, and there determination to take the law into their own hands, and deal with the paedophile satanists, which the police allow to operate with impunity.

Having known Paterson for many years, I can state with certainly, that John Paterson is a force to be reckoned with and public enemy number one, to the paedophile satanists currently in positions of power today.

Speculation is running high that Paterson has been removed from the playing field in the run up to the Christmas General Election, because the information he holds on the people posed to take power.

Latest news is that Paterson is being transferred to Wandsworth Prison tomorrow.

John Paterson has been detained for a second time in another Mental Health fraud
https://guerrillademocracy.blogspot.com/2019/11/john-paterson-has-been-detained-for.html 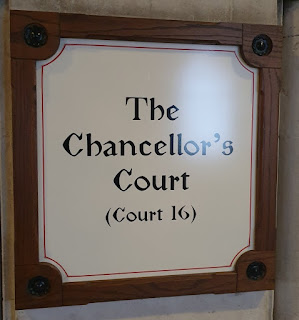 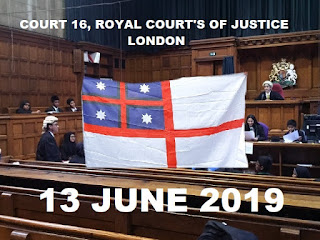 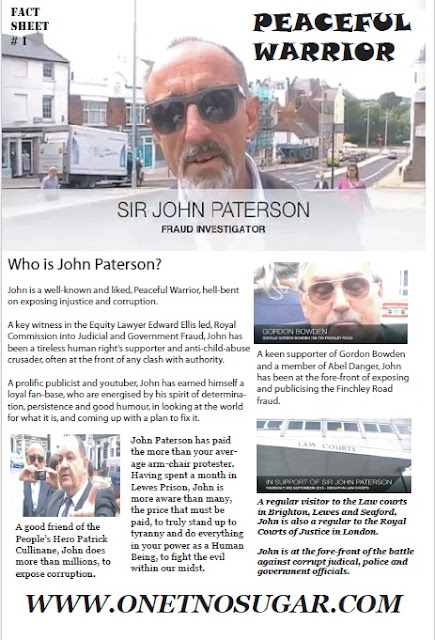 Posted by Guerrilla Democracy News at 10:53