With the imminent release of Guy Ritchie's new King Arthur movie, The Legend of the Sword, now is the perfect time for a quick ancient British history lesson.

While Guy is peddling the French romantic fiction of a would-be King pulling a sword from a stone, mentored by a grey haired wizard called Merlin; the truth of King Arthur makes for a much better blockbuster. (Does anyone know Mel Gibson's number?)

The first King Arthur was born during the 4th Century, son of Magnus Maximus, himself the son of Constantine the Great. Born 355AD and dead by 388AD, King Arthur I fought the Romans and went down within the annuals of the Welsh Khumry as a great and illustrious king.

Both King Arthur I and II were directly related to each other, both in a long line of Kings reaching back to the first King of Britain, King Brutus and further back to the Holy Family, descended from Anne, sister of Mary, mother of Jesus Christ himself. King Brutus, a great grandson of Aeneas of Troy, came to the Island of Britain around 500BC.

Since the beginning of the 18th Century AD there has been a major suppression of British History. To the academic community there is only the tunnel vision mentality of Roman Britain, or Saxon Britain, or Viking Britain, and if any major finds are made by archaeologists they inevitably end up in one of the three mentioned categories, heaven forbid they be Khumric-British - of which there are VAST amounts of evidence and written material to blown the fake history away. 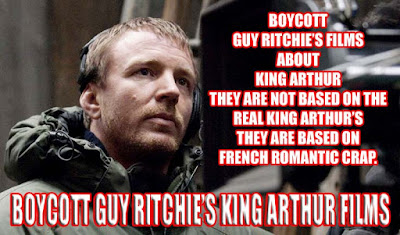 Posted by Guerrilla Democracy News at 11:22