Hack for Hire; Alun Palmer is a Coward of the First Degree.


On the 9th December 2016 I asked a question to 20 journalists on the social media platform Linkedin; (in my point of view, a perfectly reasonable question):

"Dear Journalists; Please excuse me but I don't understand why the mainstream press isn't reporting this breaking news, that a statement analyst from the US, has concluded the McCann's are lying about the disappearance of their daughter. Shouldn't this be splashed across the front page news? I'm really confused. I'm not a journalist but I seem to be having to write the stories which professional journalists are either told not to or aren't interested in. Will you please take a look at the link and I would greatly value your feedback."

To which 6 hours later hack for hire, Alun Palmer replied:
"Please fuck off and get cancer you click bait cunt."

Who then 3 hours later went onto explain:
"Apologies for the intemperate message that I sent that appears as if it was directed at you. It wasn't. It was directed at the man who spammed us all accusing us of ignoring an article he had written on Madeline McCann. Reading it, it was such a dreadful pack of lies I looked a little closer. It was posted on the Breaking News, a site where anything can be published as long as it promotes clicks. You get between £8 and £12 per 1000 people who click on your link so the more incendiary your article the more clicks you get. I find it morally disgusting that you can write such awful, dehumanising lies just to get a few clicks and earn a few quid. As journalists, we are the last bastion in this post truth world. And for that, I will get a bit sweary." http://www.forbes.com/sites/andrewcave/2015/04/24/blastingnews-250000-writers-and-11m-readers-what-could-possibly-go-wrong/2/#15e8c5e62096

It took me 3 days to quell my fury and formulate my response:

"Thank you for taking the time to reply."
http://guerrillademocracy.blogspot.co.uk/2016/12/alun-palmer-sickness-at-heart-of.html

I was incensed that Alun Palmer could wish me something so terrible for asking a simply question. I'm a father of two beautiful intelligent children and the very thought of a life without them fills me with sadness and dread.

So for a freelance journalist to say that to me, really hurt. It felt like a dagger had been plunged deep into my heart and twisted 360 degrees.

On the 15 December I asked the question:
"Do you think its acceptable that a Fleet Street journalist should wish someone gets Cancer, for asking a perfectly reasonable question about the McCann's involvement in the disappearance of their daughter?"
https://gettingreadyfor2015.wordpress.com/2016/12/14/alun-palmer-exposed-as-a-mccann-sponsored-troll/


And then again on the 9 January 2017:
"Where is Alun Palmer's journalistic integrity?"
https://gettingreadyfor2015.wordpress.com/2017/01/02/where-is-alun-palmers-journalistic-integrity/

I even emailed Alun Palmer directly on alun.palmer@gmail.com. 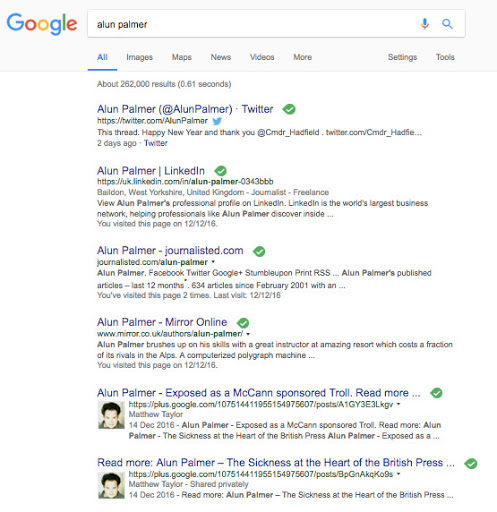 On the 5 January 2017.
"I'm happy to delete everything I've posted about you, on the condition I get a public apology for wishing me to get Cancer and for calling me a click bating cunt."

And then again on the 18 January 2017.
"You are a coward Sir. You have the gall to call me a click bait cunt and wish me to get cancer. You are a vile human being; and I'm not finished with you yet. Watch this space..."

But still; Alun Palmer remains silent and refuses to confront me.

Its official; Alun Palmer is a coward of the first degree...

Posted by Guerrilla Democracy News at 05:37