QUEEN ELIZABETH HEADS TO THE GALLOWS. 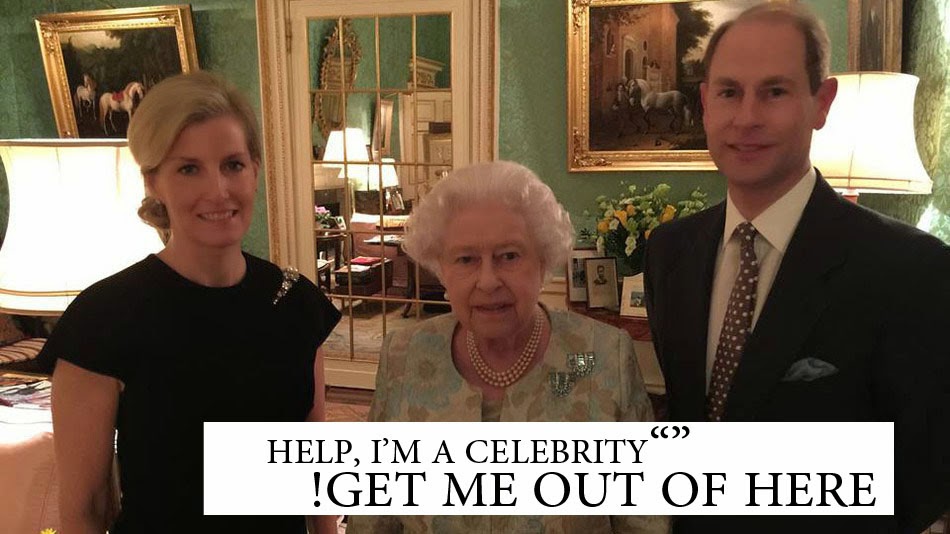 The cover of Life & Style magazine's 23 February issue boldly shouts “IT'S ALL OUT WAR: QUEEN SLAMS KATE'S FAMILY,” revealing the true state of a Royal dynasty on the precipitous of annilation.

Triggered by an interview with TYD (The Young Director) magazine, the 27-year-old brother of Princess Kate, businessman James publicly complained about being known as Kate's sibling, instead of a “serious businessman;” as “annoying.”

“Yes, it does get frustrating," he told the publication, "I work incredibly hard, just like every other person.”

Making the inference that the Middleton's don't want to be tarred with the same brush as the Windsor's, James distanced himself further from Britain's version of the Adam’s Family by saying, “And aside from the fact — yes, I am the brother of someone very important — I am, at the end of the day, just James.”

Clearly buckling under the constant strain of the relentless attacks against her Monarchy, the Queen is said to have 'blown the roof,' having learnt of his “disrespectful” comments.

An inside Buckingham Palace source allegedly told the Life & Style magazine that the ageing and frail monarch feels his comments were “disrespectful to the royal family.”

“She is furious. Queen Elizabeth is the one who is frustrated with how the Middleton's seem to moan about the royals all the time. She thinks its tacky,” an insider said, “The Queen feels angry and let down.”

Laying down the Law as she has done since a young child, the Queen is reported to have ordered Kate to tell her family “not to talk about the royals or Kate in any other interviews ever again.”

“It makes James look ungrateful and rude,” the insider added. “It really irks the Queen. She has gone out of the way to make the Middleton's feel welcome. ... It will be a long time before she welcomes Kate's family around to tea again.”

Revealed for the first time; the real reason why Kate and William were forced to split their Christmas Day down the middle by spending the morning with the Windsors and the evening with the Middleton's.

It would seem that after this slight of tongue; never the twain shall meet again.

THE ROYAL FAMILY “ARE LIKE ALIENS,” SAYS HELEN MIRREN.

With the Queen thinking it could get no worse, Helen Mirren, the Queen's official doppelgänger, adds to her misery by comparing her and her family to aliens who live in a world “so beyond our understanding.”

Reigniting the outlandish claims of David Icke of the Queen's reptilian heritage, Helen Mirren, the award-winning British actress is reprising her role as the Queen for a Broadway run of The Audience, a play that had a successful run in the West End in 2013.

Mirren won a best actress Oscar in 2007 for her portrayal of Elizabeth II in film The Queen.

“The world they live in is so beyond our understanding,” she told the New York Times in an interview to promote the play. “You’ve never queued for anything. Ever, for anything. Every time you go in the street, the traffic is stopped for you. It’s a world you can’t imagine. They are, in a way, aliens. But inside that, they are the same flawed, insecure, vulnerable, complicated human beings we are. It’s my job to get into the person who’s inside that world.”

According to the Truth Movement that isn't all which the Royal Family gets up to behind locked doors.

Most damaging of all are the claims by Kevin Annett and the International Tribunal into Crimes of Church and State (ITCCS) that members of the Royal Family regularly partake in satanic rituals in which babies are killed, decapitated and eaten by the participants.

Helen Mirren's words couldn't ring more true. They are “Aliens,” living a way of life “beyond the understanding” of the law abiding person on the street.

Its worse than we could ever imagine, and all the members of the Evil Windsor Royal family must surely be quaking in their boots, that very soon all their criminal secrets will be splashed across media outlets across the world.

Its worse that the Royal family are the same flawed, insecure, vulnerable, complicated human beings we are. Its much worse. They the most evil, selfish, immoral, psychopath, perverted and paedophile infested bunch of people you could ever have the misfortune to meet. 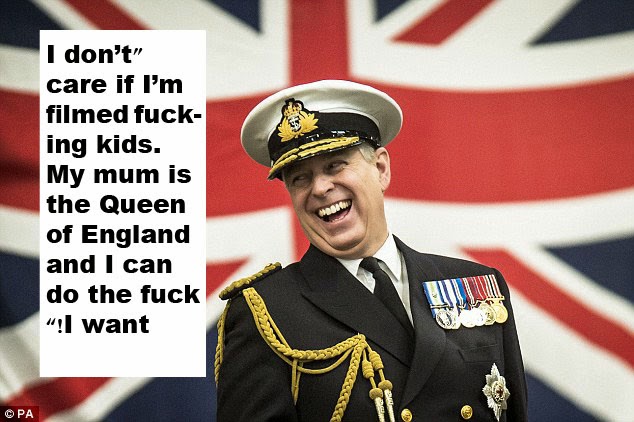 Looking haggard and drained, the Queen was forced to up-hold “long-standing convention” and promote the less deserving to the top; with the recent promotion of her embattled son to the naval rank of Vice Admiral just weeks after coming to his rescue after his teenage sex slave scandal.

Marking Prince Andrew's 55th birthday next week, the Queen looked out of her comfort zone as her son snapped a behind the scene picture of her with Edward and Sophie; which was later posted on Facebook.

The fact that It's one of the first behind-the-scenes photos taken by a member of the Royal family, and posted to a social media account, shows you how desperate they are to drum up public support before the inevitable truth hits the airwaves across the world.

Sacked as the CEO of Great Britain PLC and the Commonwealth; the Queen's problems don't stop there. From the other side of the world and breathing down her neck is Moai Native born King John Wanoa, who having served affidavits on the Queen and other prominent religious and political leaders 7 years ago, has lawfully deposed Queen Elizabeth II without anyway knowing.

Re-introducing the Laws of King William IV, (the last good King of Great Britain before Queen Victoria let the Rothschild banking family into her knickers,) Queen Elizabeth and The Pope could be heading for the gallows. Death by Hanging.

OVER TO KING JOHN WANOA.

With myself taking KING WILLIAM IV KING OF HANOVER TITLE and KING OF ENGLAND TITLE, that gives me SUPERIOR TITLE in WESTMINSTER over the LAND LAWS OF ENGLAND and its COMMONWEATH Countries by CONTRACT!

The GERMAN ELIZABETH WINDSOR GEORGE names is a CRIMINAL named by ME the KING OF ENGLAND COMMANDER CHIEF OF ADMIRALTY COURT MARTIAL LAW of Britain UK and the WORLD it is currently set up under the QUEEN!

PRIVATE COMPANY CEO and FRAUD QUEEN OF ENGLAND, ELIZABETH WINDSOR known as Elizabeth George Mountbatten. Shall be LEGALLY DEALT WITH in the MOAI KING WILLIAM IV COURT in Devonport and Plymouth in England and Devonport in Auckland and New Plymouth New Zealand on his Estate Land we seize on back into the KING OF ENGLAND TITLE!

With that LEGAL HIGHER AUTHORITY EMPIRE Reset back as it was as it still is in Devonport we transfer these SUPERIOR POWERS of KING WILLIAM IV MOAI CROWN Federal State Government Commonwealth Government and State Governments to WESTMINSTER PARLIAMENT as required of these EXTENSION OF SOVEREIGN POWERS.

MOAI Already sacked the QUEEN off ENGLAND SOIL LANDS with her ROTHSCHILD FAMILY.

After we recover the ALLEGED STOLEN PROPERTY from her Elite Royal Families back to the SHAREHOLDER VOTERS Recipients Claimants joining us in Devonport in April 2015. And May in Westminster Parliament with your 1835 KING WILLIAM FLAG that is in its PRISTINE Original Admiralty Trading Bank Military Legal Form and Economic Development of Nations Commonwealth LIKENESS and SHAPE!

In the meantime the BRITISH FLAG is Tearing to bits as UNCERTAINTY looms!

I invite you the People of Britain to join us and free yourselves from the TYRANNY and PAIN of Corporate LAW and UNACCEPTABLE Governments looking after Private Interests of their own.

KING WILLIAM IV and MOAI CROWN Earth on his HEAD SPIRIT LORE of the LAND is the missing LINK!

You have it here now with little time to join at this Office with Matt Taylor and his Staff.

Please Note that he is the Legitimate Contender for the Police Commissioner's Job and I assure you he is the right man to make them Honest or leave the Government Establishment!

On entering Parliament the KING will reduce the HOUSE OF LORDS or dismiss them all together doing a KINGS JOB badly.

And find who is not fit to be a MP in the HOUSE OF COMMONS and Dismiss them with the QUEEN and her Family.

The same can be said about the ACCESSORIES to her FRAUD which remains in the EU PARLIAMENT with her and her Administrators now MOAI LEVY DEBTORS to the £970 Million Trillion ‘Trillion Pound Note DEBT BILL you see online MOAI KING WILLIAM OPARTY Site!

That credit Pound Note Recovered funds goes back to the Mobile Phone Accounts of MOAI KING WILLIAM IV Membership in the 250 Countries in the World who registers from this date on in these Country online with us in Matts Office!

My Secretary Jaymie Anna Marie Stewart and I will be with Matt Taylor any time from now on.


Please show your Appreciation with a Donation.

Posted by Guerrilla Democracy News at 12:32