THIS MORNING TV REPORTED TO OFCOM

On the same day presenters past and present sipped champagne to celebrate 25 years of This Morning TV, Ofcom received a complaint (reference Number:1-244593057‏) from a viewer about the Conservative propaganda and scare-mongering of their editorial content.

The investigative news source Guerrilla Democracy has complained to Ofcom about three specific incidents shown during their News Review segments during September and October 2013.

The first complaint refers to a comment made by Phillip Schofield about a horrific plague which could thin out all of mankind.

Scare-mongering in the most extreme, Guerrilla Democracy asked the question, 'Is Phillip Schofield a New World Order (NWO) agent or a useful idiot', following an ascertain he made that the world is in danger of over population and that the only solution is a plague which would thin out the human race.

Shown in the video below, Phillip Schofield is quoted to have read a book on the subject, which he maintains is fact and the truth. The complaint to Ofcom points out that Phillip Schofield’s ascertain that the human population is approaching dangerous over population levels is purely conjecture and no scientific studies have conclusively determined this to be the case.

Guerrilla Democracy defends the question of whether Phillip Schofield is a NWO agent, following the inscription on the Georgian Stones, stating the NWO aims to cull the human race down to 500,000 people.

The next part of the complaint is the claim that the This Morning editorial comment is solely based and favoured towards Conservative Party propaganda.

With the guests Alice Beer and Nick Ferrari on the couch, the subject up for discussion was the news that thousands of children are going to school hungry, exhausted and poorly clothed because their parents are so strapped for cash.

Immediately after Nick Ferrari is allowed to steer the conservation away from any blame towards the government and onto the parent's themselves. Being allowed to make the bold claim that the government's Bedroom Tax is not the reason for thousands of children going to school hungry, exhausted and poorly clothed because their parents are so strapped for cash, but instead laying the blame on parent's, and in doing so clearly intending to influence the viewing public that Government policy is not to blame.

Alice Beer adds to the political spin by saying “Dickensian image, threadbare and hungry, and they will have a package of £7 fags in their back pocket!”.

Before implying that parent's would rather buy the new iphone than feed their kids.

The obvious fact that the only reason a packet of cigarettes cost £7.00 is because of the tax added by the Conservative government and that Apple Inc exploit millions of Chinese workers to build their products and spend millions of dollars on the latest advertising technology to brainwash consumers to buy into their unique brand cult, makes no influence to her opinion.

As Guerrilla Democracy states “Alice Beer and Nick Ferrari are right wing supporters of the Tory government who are given the air time to come on national television, before the water-shed, to sprout their vile and cruel opinions to the nation and in doing so promote the Nasty Party which we have come to know as the Tory Party.”

The complaint to Ofcom continues with the discussion that two thirds of British parents refuse to let their children watch the news, for fear of them watching violent material or inappropriate subject matter.

The contempt is clearly shown on Alice Beer's face as she smiles to Holly Willoughby while Phillip Schofield introduces the story.

Alice Beer starts her contribution to the debate by sneering at the wisdom of parents not letting their children see pictures of violence by saying parents aren't doing so in fear of their children asking difficult questions about the news.

She says “We all want to protect our children from the terrible terrible world we sometimes live in. My girls have just turned 10 and I actively let them watch the news. While on holiday I showed them terrible pictures of the Syrian kids killed. It effected me so much I wanted to show them the world we live in. All families should be doing this otherwise all our children won't be balanced and informed.”

Nick Ferrari nods in agreement and continues to make the case for children to watch images of dead children by stating that, “all news bulletins are put together with such responsibility.”

Too often claims are made as fact, when in truth they are ill informed opinions and at worst complete fabrication.

Nick Ferrari goes onto state with certainty “It is vital parents get their children to watch violent images!”

As a parent, I take offence to another parent telling me what is best for my children. I will decide whether I expose my children to extreme violent images of dead children following a nerve gas attack and not Nick Ferrari. 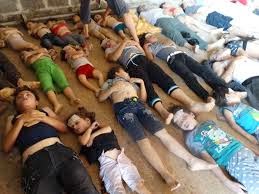 It is well established that television plays a huge influence on viewers opinions and decisions. This is evident in corporate companies spending hundred of thousands of pounds to advertise their products for up to 30 seconds a time.

To use the editorial influence of This Morning TV to promote a conservative political ideology is a clear abuse of Ofcom guide-lines and after 25 years broadcasting, This Morning TV should be taken off air immediately.

Posted by Guerrilla Democracy News at 08:49