Did you know that Bankers are now too corrupt to jail? As absurd as that may sound it is absolutely true.

Tucked away in the folds and crevasses of yesterday's news, a story broke that the British-based bank HSBC was issued with a $1.9 billion fine for the largest drug-and-terrorism money-laundering case ever.

For what equates to about five weeks’ [worth of HSBC] profit. The bank's executives have been granted immunity from jail. Immunity from any criminal indictments for aiding and abetting criminal activities, including murder.

What is more astonishing is that the British Chancellor George Osborne, is activity protecting his banker friends, by suing the European Union for putting a cap on bankers bonuses. George Osborne says to deprive the bankers of limitless bonuses will hurt 'financial stability'. 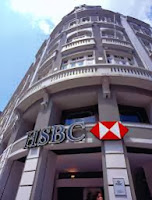 Its commonly acknowledged throughout the country that Great Britain is in a bad place, but a stable bad place. And it is this thinking that continues to keep The Nasty Party in power, the poor starving and the rich getting away with murder, satanic abuse and money laundering.

“They violated every ***damn law in the book,” says Jack Blum, an attorney and former Senate investigator who headed a major bribery investigation against Lockheed in the 1970s that led to the passage of the Foreign Corrupt Practices Act.

“They took every imaginable form of illegal and illicit business.”

That nobody from the bank went to jail or paid a dollar in individual fines is nothing new in this era of financial corruption. What is different about this settlement for the bankers, is that the Justice Department, for the first time admitted why it decided to go soft on this particular kind of criminal.

“Had the U.S. authorities decided to press criminal charges,” said Assistant Attorney General Lanny Breuer at a press conference, “HSBC would almost certainly have lost its banking license in the U.S., the future of the institution would have been under threat and the entire banking system would have been destabilized.”

People may have other things on their minds other than about Wall Street and billionaire bankers getting away with day-light robbery. But the HSBC case went miles beyond the usual paper-pushing, keypad-punching -sort-of crime, committed by your trusted banker in a suit. In this case, for at least half a decade, HSBC helped to wash hundreds of millions of dollars for drug mobs, including Mexico’s Sinaloa drug cartel, suspected in tens of thousands of murders just in the past 10 years – people so totally evil, jokes former New York Attorney General Eliot Spitzer, that “they make the guys on Wall Street look good.”

HSBC GOT AWAY WITH MURDER.

The bank also moved money for organizations linked to Al Qaeda and Hezbollah, and for Russian gangsters; helped countries like Iran, the Sudan and North Korea evade sanctions; and, in between helping murderers and terrorists and rogue states, aided countless common tax cheats in hiding their cash.

Also known as the Hong Kong and Shanghai Banking Corporation, HSBC has always been associated with drugs. Founded in 1865, HSBC became the major commercial bank in colonial China after the conclusion of the Second Opium War.

The Second Opium War was the one where Britain and other European powers basically slaughtered lots of Chinese people until they agreed to legalize the dope trade (much like they had done in the First Opium War, which ended in 1842).

“Our goal here, is not to destroy a major financial institution.”

Swiss bank UBS, which had just admitted to a key role in perhaps the biggest antitrust/price-fixing case in history, the so-called LIBOR scandal, a massive interest-rate ­rigging conspiracy involving hundreds of trillions (“trillions,” with a “t”) of dollars in financial products.

While two minor players did face charges, the assistant attorney general Lenny Breuer from the Justice Department worried aloud about global stability as they explained why no criminal charges were being filed against the parent company.

“Our goal here,” Breuer said, “is not to destroy a major financial institution.”

HOW DID THE HSBC SURVIVE THE FINANCIAL CRASH?

We now know that to survive the 2008 financial bubble, HSBC took a slightly different path, turning itself into the destination bank for domestic and international criminals of every possible persuasion.

The Federal Reserve knew what HSBC were doing. They sent them 30 formal warnings between 2005 and 2006 alone, to stop their activity or else. So in other words, HSBC broke the law 30 times in just more than a year and got off scot-free.

AT LEAST IN COMMUNIST CHINA THEY JAIL BANKERS.
IN GREAT BRITAIN WE SHOULD JAIL THE POLITICIANS TOO, AFTER-ALL GEORGE OSBORNE KEEPS TELLING US TO FOLLOW CHINA'S EXAMPLE.

“If you have clients who are interested in ‘specialty services’­ – that’s the euphemism for the bad stuff – you can charge ‘em whatever you want,” says former Senate investigator Blum. “The margin on laundered money for years has been roughly 20 percent.”

To read more visit Rothschild too big to Jail.

Posted by Guerrilla Democracy News at 03:08