SUSSEX POLICE IN THE DOCK.

Sussex Police force is corrupt and Guerrilla Democracy can prove it.

The news is coming in thick and fast that the Police can't be trusted and here are some reasons why: 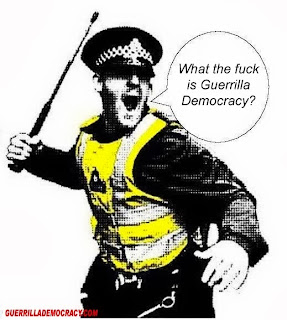 Ironically its the fifth example above which has erupted the most furious reaction from Parliament, and says a lot about the calibre of politicians that such offences like racism, murder cover up, aiding and abetting paedophiles should be seen as minor offences compared with lying about one of their own.

That Police officers lie; is no longer circumstantial evidence, it's fact.

The latest news coming from the fight against corruption is that Michael Doherty has succeeded in winning the right to launch an unprecedented private prosecution against a police employee for perverting the course of justice. See here for the full story.

Michael Doherty is yet another victim at the end of a long line of police corruption victims.

As reported in the Telegraph newspaper, Ms Murphy, who is the secretary to the Hounslow borough commander, Carl Bussey, made a police statement alleging that Mr Doherty called her ten times over two days and made her feel “upset” and “harassed”. The father-of-three then decided to bring a private prosecution against her, alleging that the witness statement was false.

There is a sea-change of acknowledgement, that the Police are corrupt.

With the attention currently on Leeds police and their active involvement in protecting the vile Jimmy Savile from criminal prosecution, its easy to forget that Sussex Police are just as guilty of police corruption as their colleagues in the North of the country.

Michael Coughtrey tells of a disturbing story in which his mentally ill brother was accused of attacking a police officer with 20cm kitchen knife.

As reported by the local Brighton Evening Argus newspaper, and seized upon by then Chief of Brighton Police Graham Bartlett, PC Cameron, the officer in question was praised for his bravery and the protective vest which saved his life, were turned into local heroes.

All very commendable until you learn that Alex Coughtrey aged 58, spent 15 months on remand, before the case was dropped unexpectedly at the last minute, because the crown prosecution were unable to produce the evidence.

As Michael says, “My brother would have been given a life sentence. Surely there must be someone with some clout who would be concerned enough to take an interest.”

The police made it up!

Michael Coughtrey proves it at BrightonScandal.org.uk.

The truth is out: Alex never stabbed PC Cameron and never even held a knife. It took nearly a years effort to obtain a forensic report which showed the officers stab vest to be completely unmarked, something his officers were well aware of. Graham Bartlett's attitude was that he supported his officers regardless of the truth.

Graham Bartlett continues to hide behind a wall of dignified silence rather than answering his accusers and defend his honour. Read this article here to learn more.

If you've got a problem with the Police take it to IPCC.

This is exactly what Graham Bartlett said to Michael Coughtrey.

Michael continues, “Graham was also well aware that the IPCC would come to his rescue and so it proved. We had no faith in the IPCC but with the strong encouragement of Simon Kirby MP felt we must give it a try. Another year of our life was about to be wasted as the IPCC handed the complaint straight back to Sussex Police Professional Standards Dept. who after an 8 week investigation assisted Graham with a request to the IPCC to discontinue the investigation.”

Isn't it any wonder the IPCC are seen as a critical friend rather than a proper Complaint's Commission?

Evident from the Youtube video below, the IPCC are as effective as a chocolate tea-pot.

Victims of Police corruption complain they have lost confidence in the system and claim the IPCC have failed to deal with cases with fairness and impartiality. In effect the IPCC are police investigating police.

Back to Sussex Police.

With the above in mind, namely that the IPCC isn't fit for purpose, isn't it any wonder that the Chief Constable of Sussex, Martin Richards was cleared of any wrong doing, after a complaint was made against Arun District Council in 2002 that a pedophile ring was operating within the council offices appears to have been interfered with by the Chief Constable who appears to be friends with the ex-Chief Executive of the Council.

To read more about this and sign a petition calling for the removal of Martin Richard's as chief Constable, click here.

Examples of Sussex Police corruption are too many to count.

Briefly touching upon the James Ashley assassination and the Katrina Taylor murder cover-up, examples of corruption in Sussex Police is epidemic.

In 1999, the then Home Secretary David Blunkett convinced the Sussex Police Authority to sack Paul Whitehouse, the Sussex Chief Constable at the time, for criticism of his decision to go ahead with promotions and pay rises for two of the officers involved in the raid in which suspected drugs dealer James Ashley, 39, who was shot dead in front of his girlfriend, as he lay in bed, naked and unarmed, after officers burst into his Western Road second-floor flat, firing a single shot into his chest.

The Katrina Taylor murder cover-up is still in full swing, evident by the attack against David Joe Neilson, who has campaigned tirelessly over the last 20 years to expose police and local government corruption.

Attacked, beaten and left for dead, David Joe Neilson was attacked by a person hiding behind a fence, which was illegally put up to cover up messages of Sussex Police corruption written on his property.

Read about the attack here. Shocking doesn't begin to describe it.

Too frightened to call the Police.

Even the Jimmy Savile scandal taints Sussex Police. In 2008 a victim of Jimmy Savile's perversion approached Sussex police to make a complaint against him, but was deterred from continuing due to his status as a celebrity and the likelihood she would be branded a liar. For all intent and purposes, Sussex Police convinced a victim of crime, not to bother. Read here for more information.

Examples of police corruption are coming in thick and fast. We hear of cases on TV and read about them in our newspapers. We have all heard the odd story here and there of a bent copper. One of those coppers who would turn a blind eye, or take a back hander. I personally know a friend of a friend of a drug dealer who was busted for a pound of marijuana, only to be prosecuted in court for possession and intend to supply half a pound of marijuana.

I even know about a friends younger daughter, going to rehab after becoming addicted to drugs while serving as a police officer in the Metropolitan police force.

“We sieged the drugs and used them” she confesses.

The police lied then and continue to lie.

The buzz on Facebook are Twitter is whether you can trust any thing the police say? One commentator points out that the Police are so used to lying in court now, they don't even bother to lie well.

Police corruption is becoming so evident its plain to see.

Police corruption isn't circumstantial evidence anymore, its fact. Anyone who doesn't see it for what it is, is either a bent copper or is in bed with a bent copper.

The reassurances from Damian Green MP, the Minister for Policing, Criminal Justice and Victims on the Andrew Marr Show, saying “vast majority of police are honest people doing a job very well,” are falling on deaf ears.

If what Damian Green MP (tipped to be Prime Minister) is true, then the vast majority of police officers should expose their corrupt colleagues. With the sea-change of public opinion in full swing, corrupt police officers are running out of places to hide. Justice is coming and justice will be swift.

As David Joe Neilson reminds us, “If police officers are found to be up to no good, stitching up people, they don’t get away with it. If a police officer covered up evidence or whatever, he should be found guilty and he should go to prison and should serve twice the sentence of Joe Public in the street because he is there to be trusted to do the job to protect society and society being the individual not the system, not the masons but the individual, the citizen.”
Posted by Guerrilla Democracy News at 07:34