Part of the 'Get it Sorted by Christmas,' mission to finally rid the world of the Satanic Scum that rule it.

Never before in the history of British Kings and Queens have the natives revolted in such a daring and fatal manner.


No one could have guessed that the end of the Windsor royal dynasty would end in such spectacular fashion. No one could have foreseen the danger waiting to pounce from the other side of the world.

Not since the asteroid debris which heralded the Dark Ages and destroyed King Arthur II's Kingdom, has a royal dynasty come to such a swift and tragic end.


Not since 569AD in Kentucky USA, when King Arthur II, (who had just taken off his armour after another strenuous day on the battle field), was killed by a savage red Indian, who slipped past the medieval defenses, to plunge his spear deep into his heart, has a monarch's reign been so swiftly concluded.

Not since the 30th of January 1649, when King Charles 1 was beheaded for treason, has the transition of power been so direct as the transfer of Monarchy between the Windsors and Moai Natives, represented by King John Wanoa.

John Wanoa had recently been arrested in a high profile occupation of 61 Cook Street in down town Auckland, New Zealand. 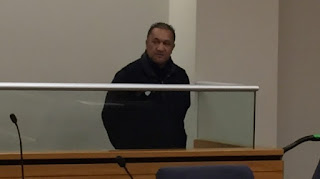 
Two self-proclaimed Maori land activists who stormed an Auckland office forcing workers out will remain in jail until Monday despite their heated pleas to be released.


Hoani Kahaki Wanoa, also known as John Wanoa, 66, and John Murray Monga, 50, appeared in the dock of Auckland District Court on Saturday, both facing a charge of forcing entry with the intention of taking possession of the property in a way that breached the peace.


The two men were arrested on Friday and charged with trespassing, assault and forcing entry.


While under arrest, John used King William IV Jurisdiction over the Queen's “Crown” Corporation and won against the New Zealand Government.

As the New Zealand Herald commented:


“Wanoa was more conservatively dressed and told Judge Grant Fraser that he was a UN marshall, "recognised".


There was some confusion over who was the senior member of the operation as the judge tried to unravel their submissions.


"The King of Hawaii", "New World Order law", "King William IV", "Obama" and "The Pope" were all referenced during the protracted initial hearing, through which both men represented themselves."

John Wanoa said, “I got arrested and used King William IV Jurisdiction over the Queens "Crown" Corporation and won against the New Zealand Government Police CIB equivalent to the US Federal State FBI and the Crooked Hillary Obama Scam will get Plummeted by the Kings Bench Court Sheriffs By the way the Queen Owns America so the King snaps it off her and snaps Britain UK at the same time back into the Kings CUSTODY TITLE he created NOT the QUEEN.”


“We're on track to succeed TITLE off the BRITISH MONARCHY.”


“The group responsible for the incursion was contracted by self-proclaimed "surrogate king" and conspiracy theorist John Wanoa.


Several staff members are forcibly removed in the video, with some stalling for time while they called police and one male worker refusing to go easily, prompting repeated physical attempts from the group to remove him.


In the full version of the video, which was filmed by a member of the group, men are seen planning their entry outside the address, where they are told to confiscate keys and cards from workers if possible before sending them outside - and barricading themselves inside.


However, police were quickly called by several staff members and after they arrived the group promptly left.


Police confirmed one man associated with the group was arrested in the carpark after he refused to give his details to police.


Trespass notices were served to some of those present and police are currently trying to locate the other people involved.


"Police would ask people who have concerns as to the ownership of property to use the correct legal channels including calling police where required and not take the law into their own hands," a police spokesperson said.


Mr Wanoa confirmed he was responsible for the action, saying he holds a customary title to the land and had hired people to support the eviction of the tenants there.


He said he informed Auckland police's CIB unit that he intended to occupy the premises and said he had acted legally.


A Tournament spokesperson said the company did not want to comment on the incident.”

The Queen is shutting us down.

Queen Elizabeth II has sold us down the river. She's sold our sovereignty to the European Union from behind closed doors and away from the reach and ears of the British people. Like a rat fleeing a burning ship, the Queen has turned her back on Great Britain, burning all her bridges and abandoning the people she promised to defend.

The British People are Blind.


Only John Wanoa can offer the opportunity of a seamless transition of power.

Disregarding the reigns of Queen Victoria, King George and Queen Elizabeth II, the Moai have gone back to their original contract with King William IV; and are using his Laws to bring justice to the world.

The Queen is trapped by Moai native HAPU Chiefs she duped out of a treaty with her Maori IWI Crown Corporate thugs in the same ship she abandoned in Westminster Parliament.


Moai and the native HAPU chiefs seize on all her Monarch Sovereign fake Coronation Titles with King William IV title back into his native Chiefs “Waitangi Marae Kings Bench Court.”


This time the Queen has been caught committing treason in New Zealand where she has run her corrupt business which no -ne knew about and used King William IV Admirality Court Martial Law for Pirates she named as us.

GET THE PICTURE NOW? SO MOAI AND KING WILLIAM IV MEMORIALS BELONGS TO THE NATIVE HAPU HE CREATED THE ADMIRALTY FLAG OF JURISDICTION FOR MOAI PEOPLE AND THE BUCK STOPS THERE https://www.facebook.com/John-Wanoa-BLOGS.../..."

Posted by Guerrilla Democracy News at 08:08