Following the news that Kristin Geraldine Ellis-Petley, has pleaded guilty in conspiring with others to kidnap Child X, the third person, alongside Anne Hill and Jane Going-Hill to do so, in the developing Wilfred Wong child rescue drama; citizen journalists :Andrew :Devine and Angela Power-Disney have both added fuel to the fire, by speculating that ex policeman, and child abuse cruscader, Jon Wedger also had a part to play in the Child X rescue/kidnap.

Highlighting the conflicting versions of the story coming from the mainstream media, that either Child X was kidnapped/rescued in a Citroën Picasso car or a lorry, Angela Power-Disney stated while in conversation, "I am haunted, one of your witnesses said, "Wilfred and W are on their way". This was connected to the alleged rescue of the child. I'm wondering is the 'W' Wedger, and if Wilfred Wong, plus three other men were arrested as reported by the mainstream media, four men right. I'm just asking the question, was it Wilfred Wong, Jon Wedger, Dilo the bodyguard and James the cameraman from Shaun Attwood, for a Netflix movie, now that's a hypothesis, that's a question that I just want to put out there."

With a history of animosity between Angela Power-Disney and Jon Wedger, she explained further that Netflix had put out an offer that anyone who wanted to tender a bid to make a documentary had until the end of February to do so, by submitting footage to be considered for a Netflix documentary series.

"I think Wilfred Wong was reeled in like a lamb to the laughter. "

Power-Disney continues, "I'm still working on the theory that he [Wilfred Wong] is a patsy like Saline McNeil, like Carl Beech, like to some extent Andrew Ash. They find a genuine, naive, (and you and I could be accused of this,) kind of like someone who either cares  and think the best of everybody and trusts and all the rest of it, they find somebody like that and draws them in, and that person is not aware of whats swirling all around them."

Holding nothing back, "I think there are certain people in the Truth Movement trying to get a Netflix deal, and I think that Satanic Ritual Abuse and high drama like child rescue are big money, big currency."

"I honestly think Wedger was there. You've got a recording saying Wilfred and W are on their way  and sorry, I think that was Jon Wedger."

Contacted by Guerrilla Democracy News to respond to this allegation, Jon Wedger clearly wasn't impressed, and neither confirming or denying the allegation said, in a the short but stern response, "Go away. Idiot." 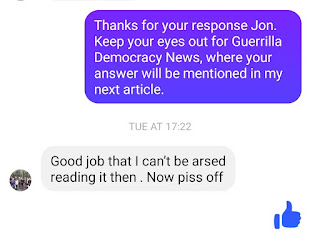