MY CLAIM TO FAME! My claim to fame is the 'Matt Taylor Orders the Immediate Arrest of David Cameron and The Queen' published on Guerrilla Democracy New's sister blog 'Getting Ready for 2015,' which at it's height was read by a million readers across the internet in one month alone.

Admittedly, I only wrote the foreword while the bulk of the article was written by Judy Byington, but still, I appear to have gotten all the credit.

Read it now: Matt Taylor Orders the Immediate Arrest of David Cameron and The Queen.

It certainly caused an uproar because Buckingham Palace and 10 Downing Street had to deny it following a number of calls asking whether it was true.

While nothing specifically came of it, my name was flashed across the world and my place in the Alternative Media was secured (or I like to think so!)

Even now Royal Loyalist still can't believe I had the audacity to write such treasonous claims.

“Her Majesty The Queen has dedicated over 60 years to Her People, for which we are grateful and hold her in the highest esteem. This video is an act of Treason and as a Loyal British Subject, if you ever try to mess with my Monarch, then you will get the beating of your life and prompted dropped into the deepest darkest hole in the whole of the UK, where many others loyal subject will find nothing better to do, than to regularly kick, slap and torture you for a great many years. Anyone that agrees with this filth is a moron and should get a knock on the door from men in black suits."

“Steve Perry = paid troll. Plus your story sounds shit. Support the Royals and ignore all evidence or be thrown into a pit beaten and tortured and men in black suits knocking at my door !!! Your picture of the world sounds proper shit mate."

While TJ Wilson went even further with the comment-

“It's true. If it wasn't, do you really think MI5 would let Bill Maloney stand in the City of London calling Queen mum a peadophile ? Unless like he says he as evidence. The next thing will be trying to kill Bill God bless him. COME OUT THAT BOX U LIVE IN NUMPTY."

To Steve Allan who squarely put Steve Parry back into his box.

“Steve Parry; Well said after 60 years dedicated service with low pay and back breaking work what right do commoners have to criticise Her Majesty and her Royal family for participating in a paedophile ring. I would consider it a honour if my children were invited to participate.” 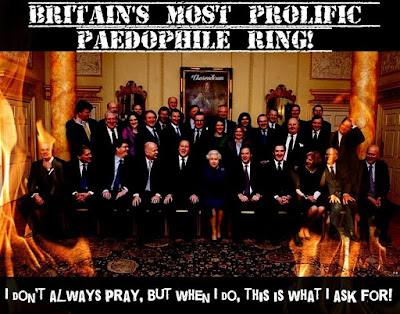 
If you've enjoyed reading Guerrilla Democracy News please show your appreciate with any donation you can spare. Alternatively please order a book and help me keep the wolves from my door and a roof over my head.

Posted by Guerrilla Democracy News at 16:49